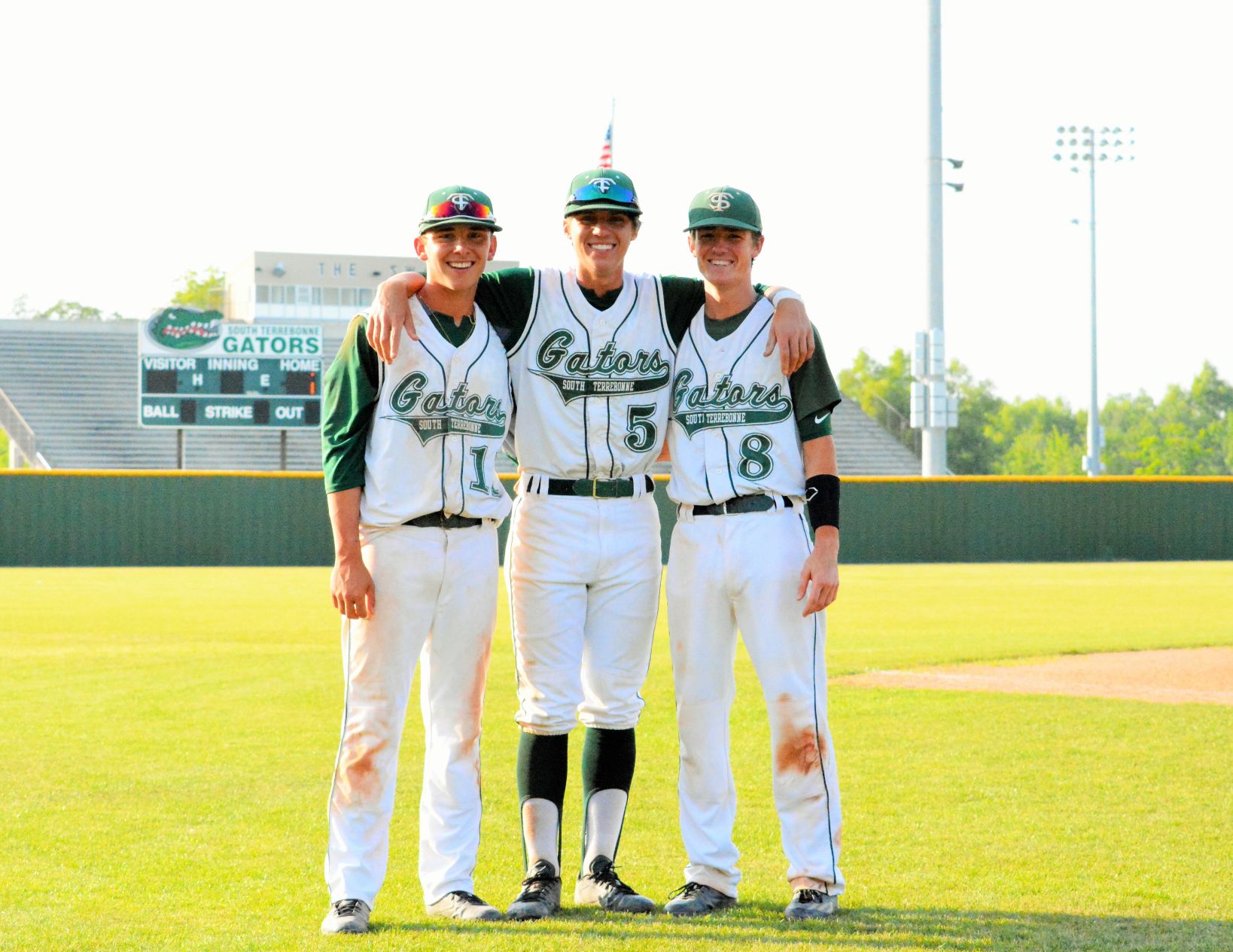 The South Terrebonne baseball team was brutally young this season – one of the least experienced teams in the Houma-Thibodaux area to begin the 2017 season.

But in the final few weeks of the season, that youth started to bare a little fruit, and the Gators started to show exactly how bright their baseball future may be.

South Terrebonne finished their regular season with a bang, winning seven out of the final eight games of the season to overcome a 6-15 start to the season and reach the Class 4A State Playoffs.

Gators coach Stephen Barba Jr. said he’s proud of his players for battling through adversity and staying the course.

One of the team’s three seniors, pitcher/infielder Beau Freeman said this year has been the most fun he’s had in his career, calling the team’s midseason transformation an “incredible experience.”

“We struggled in the beginning of the season trying to figure things out,” Freeman said. “We had a lot of younger guys thrown in to difficult situations, and they all really stepped up to fill some important spots on the field and in our lineup. It’s been really fun watching this program develop this year. It’s been a blast.”

The beginning was tough, though.

South Terrebonne had a brilliant club last season – a group which won 19 games and made it to the second round of the Class 4A State Playoffs.

But that team was an older group, led by guys like Blake Freeman, Brett Franks and others in a six-member senior class, which dominated the team’s starting lineup – both in the field and on the mound.

This year’s group had to pretty much start over, leaning heavily on a three-member senior class (Beau Freeman, Tristin Pinell and John Gregoire). The Gators also rely heavily on a junior group, which consists of Connor Brunet, Davis Arceneaux and Daniel Whitten.

But the youth showed early in the season.

The Gators opened the season OK, posting a 3-3 record, which included victories over Central Catholic, John Ehret and Terrebonne.

But after that, the Gators went into a lull, dropping eight out of their next 10 games to fall to 5-11 on the season and 0-3 in District 7-4A play.

Junior infielder/pitcher Connor Brunet said this year’s group has always been talented, but they lacked the chemistry early on, which affected them in close games.

In that early-season slump, the Gators lost most of their games by three runs or fewer, including several one-run defeats.

“A lot of our guys didn’t have experience,” Brunet said. “They are all very good and very athletic, but during the beginning of the season, we were just inexperienced.”

But as the year went on, that all started to change.

After starting just 1-5 in district play, the Gators started to roll.

They ended the season arguably the hottest team in District 7-4A, posting series victories over Morgan City, Ellender and South Lafourche to close the year.

Brunet said those wins gave the team confidence, because everyone in the locker room knows that the local district is loaded, featuring five playoff-bound teams.

“Every game we played was a battle between us and the team that we played each week,” Brunet said. “I enjoyed the district being tough, because it gets us better and ready for the playoffs.”

Barba agreed and said the key to that surge was a total team effort, which saw the Gators get both clutch hits and dominant pitching in key situations.

One example of that growth came in the regular season finale against South Lafourche.

With the score tied late in the game, Barba called upon Whitten to pitch in relief.

The lefty got several key outs – even as the game went into extra innings. He eventually earned the win.

The Gators also got huge pitching performances from Brunet, Freeman and Blanchard in the series. Freeman pitched a complete-game shutout in Thursday’s win.

“(Whitten) was huge,” Barba said after Friday’s win. “It just goes to show you how much our guys have grown. I can count on one hand the number of times he’s been in that situation in a varsity game. In between innings, I looked over there at him and asked him if he was OK, and he just kind of looked back at me and said, ‘I’m fine, Coach. You can’t take me out of this game.’ He made key pitches and got big-time outs for us when we needed them.”

So now, the Gators are focused on finishing what they started and sending out their three-member senior class on the right note.

Brunet said that process started on Friday during the team’s Senior Night when one of the seniors, Freeman, got hit by a pitch in the bottom of the eighth inning with the bases loaded to send the Gators to a walk-off victory to send the team to the postseason on a good note.

The Gators earned the No. 22 seed in the Class 4A Playoffs, which pit them against No. 11 Assumption – a familiar foe. The teams played on Tuesday with no score available at press-time on Monday night.

Brunet said he knows it’ll be difficult to push past highly ranked teams, but he believes that when the Gators are on, they can compete with anyone.

They have seven wins in their past eight games to prove it, too.

“Our goal for the playoffs as a team is getting to Sulphur,” Brunet said. “Baseball is a crazy game. You don’t always have to be the most talented team to win. If we just keep our heads up and fight as a team, we can do a lot of things.”