First-year docs learning on the front line at Chabert 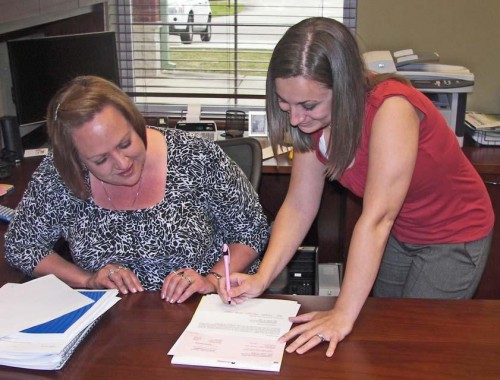 With nine banks and 45 years of service to her credit, Community Bank owner Gloria Callais markets a banking brand that she calls “the real customer service bank.”

“We have customers that have been here for a real long time and we service them like family,” said bank administrator Kristy Falgout, who oversees operations at all nine branches. “We’re a true community bank,” she said.

Community Bank opened in 1964 with three branches. The main hub was in Raceland, and the other two were in Lockport and in Thibodaux on St. Mary Street.

For years, Falgout said those were the only Community Banks servicing individuals and businesses in Lafourche Parish. However, business seemed to skyrocket in 1996 with the opening of a Napoleonville branch and another in Thibodaux on Canal Boulevard.

The LaPlace branch followed in 1999, along with branches in Golden Meadow and Larose.

With stock in Lafourche, St. John the Baptist and Assumption parishes, Community Bank leaders felt it was time to move into the Terrebonne Parish market. Longtime training coordinator Tammy Ledet said the bank has always had property in Houma. Unfortunately, the bank’s growth at the time did not justify an expansion.

“As the business grew, it became an option to expand,” she explained. “The intent had been there for many years to build in that area. But bank officials had to wait until the bank’s assets grew enough to make the move into the Houma market.”

Falgout said the bank will soon tap into mobile banking – a popular trend enjoyed by a number of commercial banks. “We’re expanding into different things like that to give customers convenience,” she said.

“We have a lot of local businesses that like to come here for personal services,” Falgout said.

And the branches reflect Community Bank’s steady growth. The main office in Raceland averages the most transactions, while the Thibodaux branch has the distinction of being the organization’s biggest moneymaker, she said.

And the most popular product? Reward or interest checking.

By year’s end, Community Bank officials hope to reevaluate its checking account availability. Falgout said the bank wants to consolidate or eliminate some of the different accounts to ensure customers are getting the best benefits from their banking services. It’s part of the bank’s ongoing philosophy: To provide the highest quality service.

With Community Bank being one of the smaller banks in the area, gaining a competitive edge is tough, Falgout said.

“We also keep up with technology and offer perks and services like our competitors to benefit customers,” she said. “We have managed to stay ahead of the curve with competitive interest rates and products.”

Community Bank has also been able to withstand the recent downward spiral of the economy.

“We have continued to see a steady growth,” Ledet said. “We’ve never been a bank that has had problems, we have always been profitable. In today’s economy, if you look at our balance sheet, we are doing much better than the economy and we still have the small bank appeal.”

Falgout said the bank prides itself on its 45-year track record.

“We have a good procedure and policy that we follow,” she said. “We keep good loans and don’t put ourselves in a bind. We maintain good customer services but we keep ourselves in a state to where we can still run our business.”

Community Bank has been serving the community for the past 45 years. Bank Administrator Kristy Falgout and organization’s weekly balance sheet. * Photo by SOPHIA RUFFIN