A battery is not just a battery at Batteries Plus

Registered fishermen still waiting by the phone for BP 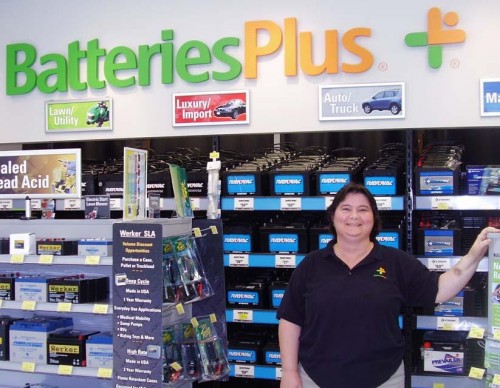 When picking out electronics, whether or not they’re portable is an important part of the decision to buy. To be portable, these devices need a power source – a battery.

Any old battery will do, right?

Since 2005, Batteries Plus at 5094 Highway 311 in Houma has been helping the technologically challenged keep their portable electronics, boats, cars, generators and more, up and running.

“Basically if it’s a battery, we sell it. We have every kind of battery you can think of,” said General Manager Samantha Nelton.

With all those battery choices, expect to be quizzed when entering the store. The staff of Batteries Plus asks plenty of questions to make sure the battery a customer purchases is precisely right.

“We have to know exactly what application you’ll be using the battery for so you get the longest possible life out of that battery. Using a marine starting battery for what a trawling battery should be used for just doesn’t work – it’s not the right application,” said Store Manager Jonothan Rowland.

For the “Average Joe,” any department store sells batteries. Why not go there instead?

“You can go to a department store and they’ll ring you up, but how much do they know about what they’re selling? We have the training and the expertise behind the sale to make sure you’re buying the right thing,” said Nelton.

For example, a cell phone battery can have different chemistries that serve different purposes. For those who use their cell phones on a limited basis, Nicad batteries have a shorter run time but a longer life. For those who use their phones all day long, the Nickel Metal Hydride battery has a longer run time but an overall shorter life span, explained Nelton.

A battery’s lifespan can be shortened if the battery isn’t properly maintained or is being overcharged.

“People are constantly plugging cell phones in and overcharging the battery. Every time you plug it in, you’re actually using up one of a limited number of life cycles,” Nelton said.

To help a customer learn how to correctly charge their cell phone and extend the lifetime of the battery, Batteries Plus gives them a “cheat sheet.”

According to Rowland, on the third time of charging, that battery will reach its maximum capacity and can be switched to six to eight hour charging cycles.

But don’t overdo it.

“That’s even with your cordless phones. When you sit them on the base, they’re constantly getting a charge to them. Take them off the base during the day and replace them at night. The batteries will last much longer if you do that,” Nelton said.

During hurricane season, experts advise to stock up on daily essentials including batteries. The old folks say store them in the refrigerator or freezer.

“No. It’s an urban legend. It doesn’t really do any good,” Rowland said.

According to Nelton, leaving batteries in the electronic device is also a bad idea. When storing something away for a while, take the batteries out and don’t let them touch metal-end to metal-end.

“It could actually form an electrical connection and start a fire by generating heat,” Nelton explained.

The recommended way to store batteries is side-by-side and in temperatures below 80 degrees. Batteries Plus uses an air-conditioned warehouse.

“We’re one of the only companies that I know of in Louisiana that actually air-conditions our batteries,” Rowland said.

Heat is a battery killer. When the temperature gets above 80 degrees, batteries begin to discharge. That’s the reason flashlights don’t last long when left in the car. The extreme heat runs down the batteries.

Flashlights aren’t the only victims of the dog days of summer. Automotive batteries have their breaking point as well.

“If it gets hot enough, the plates inside the battery might fall over, touch and ground out the battery,” Rowland said.

Road vibrations can also cause the plates to buckle and tip over.

“Check your battery to see if it moves. You want to make sure it’s tightened down so that it won’t move even just a little bit. Any bit of vibration is bad for a battery,” Nelton explained.

When the inevitable happens and a new car battery is called for, Batteries Plus gives a core credit for the old one.

However, before a customer buys a new battery, the store checks the old one to make sure that’s actually the problem.

“We have all the devices to test every single kind of battery from your regular conventional to your deep cycle to AGM or your gel batteries,” Rowland said.

They also check the alternator to confirm it’s working properly just in case it’s an electrical problem and not the battery.

Cell phones also get the double check. Batteries Plus tests the battery first to make sure it’s the battery that needs replacing and not the phone itself.

“The best thing customers can do is bring in the laptop, the cell phone, cordless vacuum, whatever. Let us see the application because a lot of times we can look at the model itself to come up with different options,” Nelton said.

“A piece of advice for people who have just purchased their first generator. Bring the battery to us and we’ll test it for you free of charge. Better to check it now than have it fail when you really need it,” she added.

For those using rechargeables, the Tech Center rebuilds battery packs for cordless tools. When the old pack fails, instead of buying a new one, Batteries Plus can rebuild it.

“When we get through with it, it has new batteries and it’s like a new pack without as much expense,” said Rowland.

By the end of the year the store will have a new tool giving it the ability to check laptop batteries too.

“Nobody has a way of checking laptop batteries right now. Batteries Plus Corporate has put together a new system that they’re testing out in a couple of stores,” Rowland said.

“Instead of selling you a new laptop battery, we’ll have a way to cross check your system,” he added.

Another service Batteries Plus offers is recycling. The store is a designated, authorized recycle center for all batteries and sends old batteries back to the manufacturer for recycling.

Once there “dead” batteries are broken down with each component going toward the creation of a new battery.

“There are so many people who don’t know what we do here and the variety of batteries that we carry and the knowledge behind the sale that we can offer,” Nelton said.

To get the public acquainted with the store, Batteries Plus is having a Customer Appreciation Day Saturday, June 26.

Batteries Plus is celebrating Customer Appreciation Day with refreshments and giveaways Saturday, June 26 from 9 a.m.-3 p.m. General Manager Samantha Nelton says there’s no battery too large or too small for her to handle. * Photo by JENNIE CHILDS