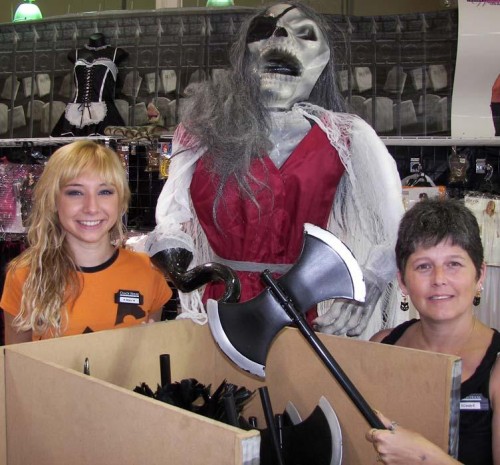 Halloween is no longer just a celebration for children to disguise themselves and go trick-or-treating for sweets.

The “Day of the Dead” celebration has become a favorite among adults, too.

“A lot more adults are dressing up for Halloween,” said Virginia Dardar, Houma’s Halloween Bootique costume shop store manager, “whether it’s the parents getting a costume to go with the children for trick-or-treating or adults buying them for costume parties.”

The increase in popularity is evident in national sales. BIGresearch conducts a Halloween Consumer Intentions and Action survey for the National Retail Federation every year.

The statistics tell how many people plan to buy costumes and how much they are likely to spend. The statistics for 2009 have not been released yet.

However, in 2008 and 2007, consumers spent well over $5 billion on costumes, and nearly 60 to 70 percent of the U.S. population planned to buy costumes either for themselves or their children.

Dardar said this year shouldn’t be any different. “Over the years, the Houma-Thibodaux market has been great for costume sales,” she said. “They seem to value the quality of our product and the prices.”

Halloween Bootique is a seasonal venture for Coach House. For the first four years of its existence in Houma, the costume shop was in Coach House Gifts in the mall. But as it gained popularity, Dardar said store owners opted to use open space in one of the department stores.

Unfortunately, this Halloween season, all the stores in the mall are filled. Coach House had to find another place for the store to make its premiere this year.

“They look at different businesses that have closed down,” Dardar said. “And they factored in the foot traffic for that area. The place that produced the most foot traffic was the store that they decided to lease for the Halloween season.”

Dardar said the building was a fixer-upper renovated to conform to display space that Halloween Bootique needed for its costume showroom.

“It’s always hard to get prepared for Halloween because you are also preparing for the Thanksgiving and Christmas season too,” she said. “So the added pressures of redoing the fixtures in this building was a lot, but we made it through it.

“Now that you look back, it was all worth it. Because people like the setup and they have a lot of room to browse the selections,” she added.

Traditionally, the selection of costumes includes monsters such as ghosts, skeletons, witches and devils.

However, as the popularity of Halloween has evolved, so have the costumes. Costumes are now based on themes. Kids and adults prefer to dress as their favorite television character or movie star, and others like to don a replica of their favorite pop culture icon.

Dardar said she has something for everyone. The Halloween Bootique selection ranges from infant sizes to plus-sizes for women and men.

“We have everything,” she said. “What’s real popular are the fairytale costumes for the girls. The boys tend to like the superheroes. A lot of the adults like the joke costumes. So whatever they like, we try to stock.”

Halloween Bootique also sells accessories for the costumes. “A costume can’t be complete unless you have all the accessories, and that’s what we want to do, provide residents with a one-stop shop,” Dardar said.

Residents can come in anytime to get their favorite character costume or try something new.

Dardar said as Halloween approaches, the hours may be extended.

The next closest Halloween Bootique in Louisiana is in Covington.

Altogether, the costume shop has 125 stores in 28 states.

Halloween Bootique has been in Houma for 21 years. This is the costume shop’s first year operating outside of Southland Mall. But salesperson Mary Knight (at left) and Assistant Store Manager Mary Stringer are looking forward to a banner year. * Staff photo by SOPHIA RUFFIN