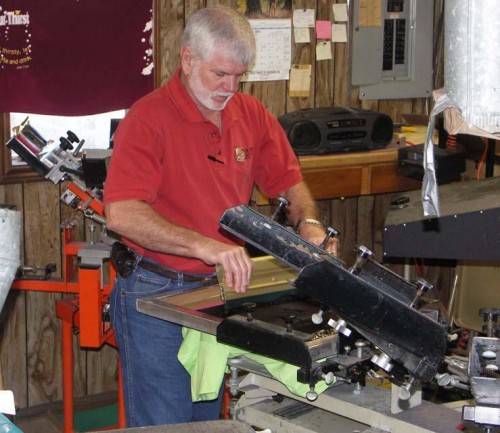 What do you do when you get laid off from the oil field at the age of 36 and have a neighbor offering to sell you screen-printing equipment that he does not want to move across the country? Mike Arp decided to learn how to operate the screen-printing machine and open his own business.

During the past 24 years, Arp not only mastered screen-printing t-shirts, he established Houma-based It’s a Fit that specializes in both multi-color screen-printing and logo embroidering on shirts, coveralls, work uniforms, jackets, caps and mugs with a continually growing customer base that includes schools, hospitals, restaurants, churches, charities and corporations from as far away as Arizona.

“I just made a lot of cold calls,” Arp said regarding his initial efforts to generate business. He also took classes, learned by trial and error and even now attends trade shows to learn about the latest equipment and techniques. Today, many clients come from the referral of others impressed with his work.

Screen-printing marks its origin as an artistic technique back to China between 960 and 1280 A.D. Samuel Simon patented the process in England in 1907. During the 20th century the process underwent multiple advancements and grew in exposure throughout Europe and North America. Artist Andy Warhol popularized screen-printing in 1962 with his multi-frame and multi-color depiction of icon actress Marilyn Monroe.

Screen-printing is a process that uses a woven mesh or silk screen supporting an ink-blocking stencil that is placed on top of a fabric, upon which the print will be made. Ink is applied to the outside of the mesh frame and pressed through with a roller squeegee ink is transferred to desired areas of the target fabric.

Different screen meshes and ink mixtures determine the thickness words or images printed on an object will be. Darker color clothing tends to require more ink.

Arp said that the largest single order he had was 10,000 shirts on a job for the State of Louisiana library system. “We did shirts for libraries in each parish,” he said. “Thank goodness it was an easy print.” Arp also explained that he would order a few extra base units in case customers need to add to their orders.

It’s a Fit equipment includes both a six and an eight color printer, a half printer, a coozie printer and all the associated tools.

“With the screen printing we generally have a minimum order of 12 shirts,” Arp said. “With the embroidery, once we get your disk for your logo all we have to do is pop the disk in the computer and we can do one shirt [when adding to orders or for special orders].”

Costs associated with screen-printing and embroidery ranges, in addition to basic prices on the items for printing, from approximately $7 to $14 per unit. Basic shirt costs vary depending on the fabric blend or surface being used.

“Most of the time, like if I order the shirts this morning, I’ll have them tomorrow,” Arp said. “We always tell everybody a two-week turnaround on [completing print and embroidery] jobs. There are cases when folks want them quicker than that, if they want to pay a rush charge. It’s one of those things that we’ve got other customers waiting on theirs too. So most of those rush jobs I’ll stay late so we can get them done.”

Arp explained that with proper care a screen printed shirt could last for several years. “We always tell people if you can do without a dryer that is the best thing. The washing [machine] really does not mess the printing up, but the heat of the dryer tends to make the ink crack,” he said. “I have a shirt that we printed in 1992,” he said. “It is a six-color print and I wear that shirt at least once a week and the print is as good on it as it ever was. The shirt is getting pretty thin, but the printing is good.”

Learning the art did not come immediately for Arp, who said he had to learn what additives to apply to ink for printing on satin jackets compared to cotton t-shirts, or having an order of 250 coffee mugs on which the ink did not immediately cure because it was not the correct kind. “But now I’ve pretty much got it down,” he said.

Screen-printing changes in during the past two decades include a greater variety of inks, screens and processes. “The ink has improved a whole lot,” Arp said. “The inks are getting creamer and softer. The film we put on screens have improved. At one point I was building the wooden frames and stretching the screens myself. But now we have aluminum frames [and save on overall expenses]. Instead of me taking three hours to stretch a screen on a frame I can now just order them.”

With an inventory of nearly 700 screens, It’s a Fit is able to take on reorders and add new jobs in a more efficient and cost effective manner.

Mike Arp began an unexpected career nearly a quarter century ago. Having mastered the art and built his business he knows that for him this job is a perfect fit.