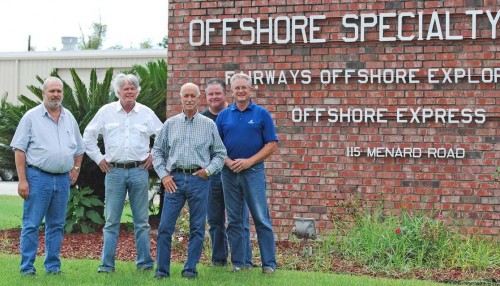 From one of the darkest chapters in its 28-year history, Offshore Specialty Fabricators hopes to emerge leaner, stronger and more profitable.

On Aug. 7, the company laid off over 100 employees from its once stalwart fabrication division.

Offshore will focus most of its attention on its derrick barge business, which has been the main revenue generator for the past few years.

The derrick barges are used to remove and install offshore platform jackets and decks.

When they reach a certain age or stop producing, energy companies call on Offshore to remove them. This has to be done under the environmental guidelines of the Minerals Management Services.

Offshore is known as a turn-key business, which means it not only does the removal and installation of jackets and decks, but all the preparation work that goes into the process.

“There are all these conductors on wells that have to be plugged and abandoned,” Fairley said. “We’ll hire divers to do the diving work. We’ll contract that portion of the job and quote those additional services for the job. So we’ll expand our turn-key services.”

Fairley is also considering adding another derrick barge to the two the company already owns – the 370-foot DB William Kallop and the 420-foot Swing Thompson.

“Those two assets are worth in excess of $125 million,” he said. “We have all the components to put together another one – big barge, big crane, living quarters – and put it into service. If we do, it will be similar to the Swing Thompson.”

The company also has a marine division, but it primarily supports the derrick barge division.

“The boat market for barges, tugboats and the type of equipment that we have is extremely competitive and slow right now,” the CEO explained. “So, we do very little business outside the company.”

Fairley believes this will be a viable business because the company has a constant supply of valves and other components – receivers, inner coolers and heat exchangers – used on the continental shelf and in deepwater exploration.

Also, it doesn’t take a lot of people to operate, which means low overhead.

“The demand for that type of service will be around as long as you have oilfields,” Fairley said. “We expect that to generate 5 to 10 percent of our business in the future.”

At its peak, Offshore Specialty Fabricators employed almost 600 workers, including 300 in the fabrication division alone.

When Fairley joined Offshore two years ago from the company he had founded, Trico Marine Services, which was also once based in Houma, he knew fabrication could be a target for downsizing.

The fabrication division had primarily built low-tech, smaller boats for shallow water exploration (less than 1,200 feet) on the continental shelf.

But over the past 10-15 years, energy companies have invested the majority of their resources in deepwater exploration.

“I determined a long time ago that shelf fabrication was a dinosaur industry,” said Fairley, a 40-year offshore oil and gas veteran. “You’ll always have your spikes where you’ll get some work. But there were too many lulls between the demands to stay in that business.

“Unfortunately, for the past few years, the fabrication division has not been profitable,” he continued. “We were carrying that overhead in the slow periods. So, we will be more profitable as a result of the layoffs.”

Offshore has kept a skeleton crew of 20 in its fabrication division – blasters, painters, welders and fitters to do most of the maintenance work on the barges.

While Fairley knows he did what was best for the company with the layoffs, that did not make it any easier to let the workers go.

“It’s never easy to tell people they no longer have a job,” he contends. “We had people who worked here 17, 18 years. The majority of them had been here over 10 years. Fortunately, most of them have already found work.”

While oil prices may be dropping and the effects of a national recession have started to be felt locally, Fairley sees a brighter and profitable future for Offshore Specialty Fabricators.

One reason is that he plans to return his barge business into a seasonal one. The move will further reduce overhead expenses during the winter months when the Gulf of Mexico’s waters get too rough and fewer jobs become available.

“If the weather is bad and these barges are rocking around, you can’t make any lifts with a barge moving. It’s got to be calm on the water,” Fairley explained. “If you keep the barges out there when there’s hardly any work, those expenses are eating away at the profits you made in the summer when there’s plenty of work.”