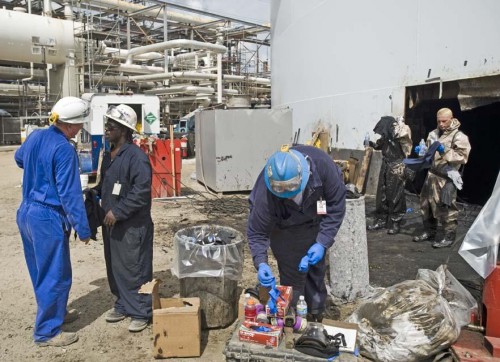 Jeff Richards, a former Division I and II football coach, has taken his work principles on the football field and implemented them into his own subcontract labor service in Thibodaux.

“I may not be on the field anymore, but I still have my own little football team,” he said. “I run my business like a football team. We are very disciplined. I expect them to be on time. I expect them to dress in a manner that’s appropriate for their job, and I hold them accountable for what they do on a job.

“I relate everything to football and athletics,” Richards added. “And a lot of the guys who work for me are from that background. They understand what it means to be dedicated to something bigger than you.”

However, the instability of the coaching profession forced him to pursue other options. He opened Team Labor Force in Thibodaux in May 2006.

Richards formed the company in response to the recovery efforts during Hurricane Katrina the previous year when the demand for skilled and unskilled laborers was high.

“During that time we decided to start a little labor company to provide labor work to this part of the state,” he explained.

Team Labor Force, according to Richards, serves the southern and western regions of Louisiana and Houston.

The company is based out of Thibodaux. However, Richards said he has offices in LaPlace and Houma.

The company started out with 25 south Louisiana workers. Then, it expanded to a little over 300 workers when the post-Katrina recovery effort was at its peak.

“We had multiple jobs throughout the state,” he said. “The area was devastated and we had a lot of guys who were needed.

“Though it was temporary labor because when the job was finished the guys were laid off,” he recalled. “It still provided a service to the area that was really needed. We still do that today.”

However, this year has been the toughest time for Team Labor Force. Surpising, Richards said, since the Tri-parishes continues to recover from last year’s storms.

But like a number of companies, Richards has been forced to lay off some workers to remain competitive.

His manpower is down to 100 workers presently.

“Not having that many workers on staff doesn’t hurt business that much because it cuts the overhead cost,” he said. “But in order to stay in business I have to go out and find work for my guys. It is like any other business, I am a salesman too.”

Fortunately for Richards, he has a high turnover employee rate from the start. He said since the work is temporary, he has a lot of guys on his payroll that work different jobs. The more skills they have, the more tasks they can do, he said.

“People just come in and fill out an application,” he said. “We interview them and then try to place them in the position that best fit them. They know coming that the work is temporary. We get them in and out.

“However, I do have some guys that have been here with us since we opened in 2006,” he continued. “The more they can do, the more jobs we can place them on. But, we don’t guarantee that they will work 40 hours a week.”

He said Team Labor Force guys are highly trained. Richards regularly invests in training for his laborers, ensuring they are capable of performing subcontracted jobs.

Some of the rigorous training Richards puts his men through includes a 40-hour Hazwoper course, a confined space simulation and the GNOIEC Basic Plus Site Specific Plant Training with TWIC cards. He said his employees can be trained to fit the needs of any company.

His hope is that business will soon pick up and he’ll be back to 150 to 200 employees. Just last week, Richards was approved to participate in the Louisiana Quality Jobs Program, where businesses receive grant funds for expanding operations to hire more employees.

“It’s my duty to expand and get us some more exposure. The more work we have the better it is for my guys and the company,” he said.

Former football coach Jeff Richards opened Team Labor Force in 2006 in response to recovery from Hurricane Katrina. Containing oil spills in the area’s waterway is just one of the jobs Team Labor Force is trained to do. * Photo courtesy of TEAM LABOR FORCE