HPD reaches out to area’s needy with food boxes 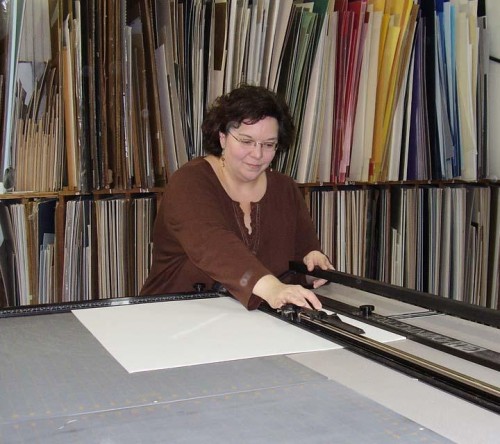 A good piece of art deserves a frame that won’t overpower it. The frame should become part of the piece drawing the eye inward to the artwork and not calling attention to itself.

The frame design should be customized to enhance the art, reflect where the art will be displayed, and how the owner feels about the art.

Not something you usually find at the chain store framing counter.

Just steps away from the Atchafalaya River in historic downtown Morgan City is a custom frame shop taking on frame designs for everything from autographed sports posters to conservation pieces to modern art.

It was 1963 when Frank and Jackie Price sold their boat, motor and trailer and used some of the cash to buy frame molding and a miter saw.

They opened The Frame Shop on Railroad Avenue taking advantage of Frank’s eye for art and woodworking experience.

The original location had limited space and when the building at 708 Front Street went up for sale in 1980, the couple jumped at the chance to move to the historic district.

“Mom didn’t know it when they bought the building but when she began researching it, she found out her grandfather had a grocery store here back in the early 1930’s,” said current owner and daughter Deborah Price.

Deborah grew up in the shop and after a 10 year absence, came home and joined Frank and Jackie in the family business. All three continue to hone their skills and keep up with new innovations in framing.

“In the beginning I guess there was a miter saw that was motorized out there but a little bitty person in Morgan City had no idea. And you didn’t even see that at the first Professional Picture Framers Association (PPFA) convention we went to,” Jackie said.

The shop’s old miter saw has since retired to a back wall and been replaced by a molding cutter that chomps through wood like a kid with a candy bar. Even that device is considered old fashioned compared to a motorized table saw featuring two spinning blades. The cuts produced by this machine are so precise it’s hard to imagine sliding a human hair through the joints.

Mat cutters have evolved from straight-edge bars with box cutter blades to computerized equipment capable of cuts limited only by the operators’ imagination.

Posters and prints need to be mounted to a backing to protect them from sagging and warping. If mounted improperly, the image can get air bubbles and ripples behind it.

“When we first started, there was a dry mount press that worked well on paper. Well, they started getting away from paper and started doing RC (resin-coated) paper and cibachrome (a glossy paper),” Jackie explained.

“It’s heck to work with. We have a press that uses both heat and vacuum. You can actually watch it pulling the air out of the thing n it’s beautiful.”

Even the glass has changed.

“Back then there was clear glass and non-glare glass. Those were the only two you had,” Frank said.

While clear and non-glare glass are still widely used, museum glass is the current best of the best. It is so clear it’s difficult to detect.

“Museum glass is very expensive. The difference is the colors in the art show up extremely well under museum glass,” Frank said.

“There’s always something new coming out on the market. There’s always going to be something that you can improve on. We go to seminars and take any educational opportunity there is,” Deborah said.

That education and experience led Deborah to enter the 2009 International Open Framing Competition. The idea behind the competition is to encourage PPFA members to showcase their talent and raise the bar on framing excellence.

“I won first place in the international competition. It was my first time entering. That was really quite a thrill,” Deborah said.

“I did the open competition because we had a really neat piece of artwork that I thought was really cool. It was an encaustic (wax) piece by a local artist. It’s really hard to work with and so I said, ‘You know what? I’m going to take one of these pieces and do it just to show what can be done with it’,” Deborah explained.

Deborah’s winning entry is on display at The Frame Shop along side artwork from many south Louisiana artists.

The main focus of the store remains custom framing, but Deborah has expanded to include a coffee bar, pottery and an art gallery.

“All the original artwork is by south Louisiana artists and it gives them a showcase. I meet them or I hear about them and ask if they want to show their art and try to sell some of it. We have so many talented people in this part of the world and there aren’t a lot of places for people to see that,” the Morgan City native said.

Locals, tourists and artists stop by on a regular basis to take a look at the latest art on display and visit over a cup of coffee. They swap stories about topics ranging from the weather to local news and even the history of Morgan City.

“So many people were born and grew up here and they don’t know the Civil War went on here. We had a Union fort called Fort Starr three blocks away across the railroad tracks. The Union built a series of forts to try to control the river traffic to try to knock out the supply line for the confederates,” Deborah said.

The history of Morgan City is very important to the Price family. Jackie was on the first historic district commission in Morgan City and helped to get the Main Street Program organized. The family stays involved in different projects to try to revitalize the area.

“I love being on the river. I love being right downtown. We appreciate the history so much. You have the shrimp boats coming in and we can still buy shrimp right there at the dock,” Deborah said.

“We have people come in get their coffee and shoot the bull. I don’t get much work done,” Frank laughed.

But that’s part of what has made working in The Frame Shop interesting for the Prices’.

“There was an artist travelling through Morgan City on his way to Florida. We let him stay in our old frame shop for over a year in the 1980’s. I bought three watercolor paintings from him. He was a good watercolor artist,” Frank said.

“I have one artist that challenges me a lot because she does a lot of out of the box artwork. She does a lot of things that are difficult to frame in a conventional manner. I love that because it challenges me n it makes me think. If you wait long enough, there’s always something new that’s going to come through that door and that’s what I like about it. It’s the unique things that come in that spur the creativity,” Deborah said.

The Frame Shop’s Deborah Price prepares to cut a mat as part of a design for one of her customers. The Morgan City native said a good frame design draws the eye to the art and not the frame. JENNIE CHILDS