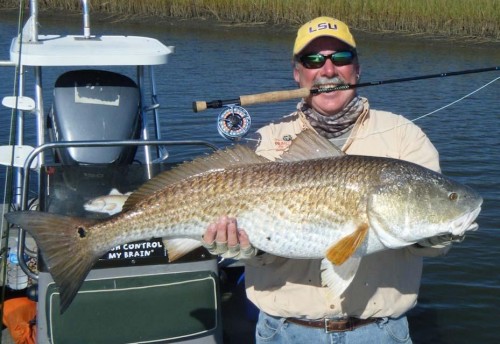 Hollywood would have you believe that fly fishing is all about the lure, or fly, lightly dancing on the surface of the water as the fisherman forms large graceful arcs with the line over his head.

“That’s a fallacy. A lot of people who haven’t fly fished, almost across the board, seem to have that impression and I don’t know why. You never fish that way; ever,” said Captain Marty Authement of Marsh Madness.

That blows that image out of the water.

They’re both fishing; the difference is in how the lure gets delivered.

Teaching fishermen just how to do that while helping them enjoy their day on the water is the life’s work of the local guide.

Authement came to fly fishing after graduating from Nicholls State University with a Mass Communications degree. He worked full time as a writer and part time as a guide until about eight years ago when guiding became a full-time job.

Now he splits his time between the marshes of south Louisiana and the Madison River in Montana.

The guide doesn’t venture into the Gulf, sticking to the shallow waters of inland marshes just outside of Pointe-aux-Chenes instead. Trips usually launch at daylight with a short ride in a 19-foot shallow-draft boat.

One of Authement’s favorite fish is the predatory redfish; a fish he explained doesn’t require bait as much as an active lure.

“If it moves they’ll hit it. So I have a variance of colors depending on the color of the water. You’re just looking for what’s going to be the most visible. If they see movement, they key on it and hit it. So it’s all about getting their attention.

“We actually look or sight fish in the shallow water. It’s almost combining hunting and fishing. You’re stalking, searching for your prey. In the shallow water, you can see their fins break the surface or see an explosion of water when they’re feeding. You put the lure in front of them and watch for the strike. After that, it’s between the fisherman and the fish,” the Des Allemands native explained.

Things start later in Montana. Even in the peak of summer, the overnight temperature can drop into the 40s; too cool to go fishing.

Once it warms up a bit, the guide gears up his customers and heads out onto the river in a banana-shaped row boat. The reason for the shape is rocks. The Madison River current is always moving. Add semi- to fully-submerged rocks and it becomes a dangerous and unforgiving river.

“If someone does something wrong, hits a rock, hits a bridge; that water is just going to suck you under. If you get pinned somewhere, there’s no coming up,” Authement said.

The raised front of the boat will climb up and slide off river rocks whereas a regular flat bottom boat wouldn’t stand a chance. With the snow-melt-fed river temperature near 50 degrees, staying in the boat is a priority.

“You’ll fish through the day, especially in the middle of the summer during the warmest times. When you get that low light right before dark some of the best insect hatches come off. That’s the dinner bell. These fish live on insects,” Authement said.

Louisiana sight fishing is out in Montana. The Marsh Madness owner looks for spots in the water that fish tend to hang out, like in the relatively calm water behind rocks.

If a fisherman casts in front of the rock, the bait will drift around the edge or feeding channel. The fish (usually trout) will come out to grab it and there’s the strike.

“At some point we’re going to stop along the bank for lunch. I pull out a little portable table and chairs; we’ll take a breath and look at the scenery. There’s a lot of wildlife where we’re at. We have elk and deer, every now and then moose or a bear. Lots of birds, eagles, golden eagles, ospreys,” Authement said.

“Some of the most memorable days aren’t necessarily the ones where you catch the most fish. You’re on one of the most beautiful rivers in the world and the scenery is just mind numbing.”

Whether in Louisiana or Montana, it’s all about the cast; hitting a specific target. Authement explained it takes experience to recognize the difference between a bad and good cast. Be it conventional fishing or fly fishing, the line should go straight back and straight forward right to hit its mark.

“Golfers I know will tell me the same thing. The scores and everything don’t matter. You want the swing to be right; the flight to be right; that’s the whole deal. That’s kind of like fly casting. It’s good to catch fish, you love it, but as long as the casting is good and everything’s working, it’s just the beauty of the sport to me; much more enjoyable than conventional fishing.”

Marsh Madness’ customers are mostly tourists, but locals wanting to learn the sport join Authement from time to time. Women are the easiest to teach.

“A fly rod is all about technique. If you’re trying to overpower the rod it won’t throw. Guys get all the testosterone going and those are the guys you see flailing around. Women will do the technique and learn it much faster. And they’re better. Some of the best fishermen are women,” Authement said.

The guide admits when he was first learning he wasn’t that great at it.

“I was horrible, but I finally got it. You can’t overpower a fly rod. It’s a finesse thing. It’s all about the technique. You can’t change it. The mechanics don’t work.”

A typical Marsh Madness trip is eight hours on the water but Authement isn’t watching the clock.

“I love being out. If I come back early that means I’m in the living room watching TV and there’s no fun there. So I just tell people, ‘We’re done when you’re done. You tell me when you’re finished,'” Authement said.

One customer surprised the guide when he ended a trip after about 15 minutes on the water. The man was what Authement calls a species hunter; like a bird watcher checking off species on a list, but with fish.

“He told me, ‘I need to get a redfish for my list.’ So I took him out, I spot a redfish, he makes a perfect cast, lands it, takes a picture, takes his rod apart and says, ‘OK, I’m done.’ I understood going in he was looking for the species, but what I couldn’t get was you can catch more than one. But no, he had his checkmark on his list. Done. Next,” the guide laughed.

Louisiana and Montana complement each other according to Authement. Talking up Louisiana while in Montana and vice versa has his customers showing up in both locations; Authement’s scenario for success. He also credits working the two areas as insurance against tragedy. Hurricanes and oil spills spell bad business for Louisiana, just as a dam break ended the season in Montana a few years ago.

“I have a lot of good friends that guide here, if something like (a hurricane) happens, they’re out of work; period. About four years ago, the dam that controls the flow in the river where I guide broke. The water flow increased 10 fold in a second. Season was over. I came back here and worked. So it really works hand-in-hand,” Authement said.

“I have a lot of friends here guiding that are hurting and it’s because of the national perception. The fishery is as strong as it ever was. Our local waters are just teeming with fish. These guys who work here full time have to wait for the phone to ring. People across the country are just hearing the negative so they don’t call.”

Waiting for that phone to ring is a drawback to being a fly fishing guide.

Some days Authement works, some days he doesn’t. It calls for a bit of planning on the guides’ part.

“It’s all to the whim of customers. They call or they don’t. You always have to put away for those days. It takes some planning and discipline. It’s a risky business, but I love it. I remember when I first started with my boss in Montana, he told me a guide’s life is a hard life but a good life. I wouldn’t have it any other way.”

Capt. Marty “The Montajun” Authement with the biggest redfish he’s caught on a fly rod. The charter fishing guide says he is one of just a few guides taking customers on fly fishing trips in south Louisiana. COURTESY PHOTO