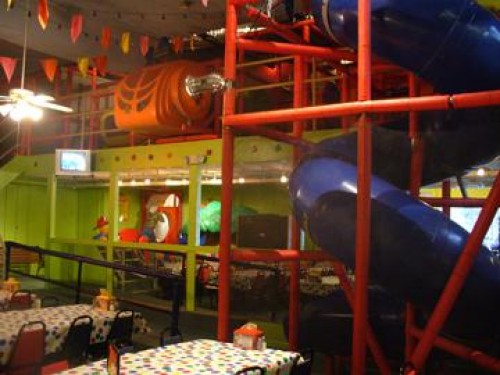 Years ago, when Errol Bourgeois would take his kids to eat in New Orleans, he wondered why Houma didn’t have a restaurant that combined food with a fun atmosphere—namely games—for kids to enjoy.

A real-estate agent at the time, Bourgeois had contemplated opening that type of restaurant in Houma. When the building that currently houses Pinocchio’s Playhouse on Prevost Drive was for sale, he saw his opportunity.

“It was an idea he had for a couple of years,” said Shea Bourgeois, Errol’s wife and part owner of Pinocchio’s Playhouse. “He saw the building, and he figured this would be the perfect place to open the restaurant. There was nothing like this in the Houma area.”

Specializing in pizza, games and birthday parties, the two-story facility that houses Pinocchio’s Playhouse has offered those three things to Houma residents for the past 10 years. And those same residents have taken the Bourgeois’ up on the offer. “On Saturdays and Sundays, we do about 40 (birthday) parties per weekend,” said Shea. “When we first opened, we booked up really quick.”

And despite national competition coming to Houma over the past few years along the heavily traveled Martin Luther King Boulevard, Pinocchio’s remains the hot spot for birthday parties. “It’s never affected us at all,” Shea said of the competition. “If anything, our business increased.”

Part of that reason is because the entertainment options have increased. Last summer, the Bourgeois’ opened up Lazer Tag of Houma, the only of its kind in the area. “It’s just another thing we thought about for a couple of years,” explained Shea. “The kids really enjoy it, and it gives them something else to do that they don’t have to go out of town for.”

The nearest Laser Tag arena is in Harahan, with another in Baton Rouge.

Shea said Lazer Tag of Houma also offers extended fun for kids. “We have lock-ins, and private parties for Lazer Tag, as well,” she said.

Other features at the restaurant include an abundance of games for kids to play while waiting on their food or while celebrating a friend’s birthday. “We change out the games once a year,” said Shea, “to the more popular things. We have all of the most popular games that they have nationwide.”

Two different types of parties are offered, ranging from $8.99 per child to $14.99 per child, the latter of which includes three games of Lazer Tag.

So do the Bourgeois’ have plans for future growth?

Not quite. At least not yet. “We have small kids,” said Shea. “And they do love coming here.”

The younger siblings of the kids Errol used to bring to New Orleans to eat and play, now just stay in Houma for the fun.

Just like countless other children in the area have done for the past 10 years.