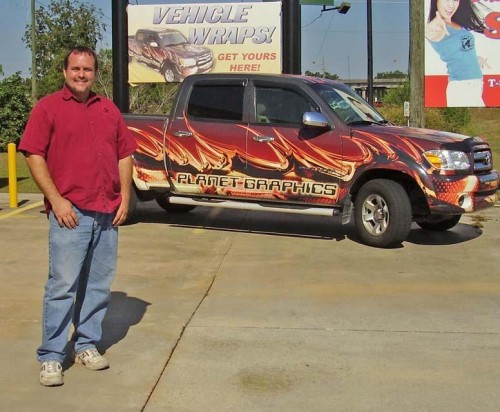 From signs of all sizes, to company cars, to concert, festival or family reunion T-shirts, snappy artwork and logos have become impossible to ignore.

One of the creators of this plethora of visual graphic art is Christopher Scott of Planet Graphics.

The business started out in 1994 as a screen-printing company, but customer requests for more types of graphic design meant more skills had to be added.

“People would say, ‘Can you please put this logo on my truck? How about a banner? Can you do other things with it?’ It was my customers who taught us what they wanted and we did it,” Scott said.

A tour through Planet Graphics reveals a wide range of products and services. Signs, banners, vehicle wraps, stickers, screen-printed or embroidered shirts and hats, tents and business cards are just part of the repertoire.

“The plastic letters on our building, the flags, the lit signs, the metal signs, the graphics on our trucks, the stripes on the parking lot. Everything you see, we did,” Scott said.

“Sometimes we’re contracted to do medium and small size billboard covers. We can also cover the whole side of a building with a banner and paint logos onto tents,” Scott said.

The company was contracted to paint a logo on a tent for Nicholls State University. The project was so difficult Scott asked the university not to tell who did it.

“They brought it to the Thibodaux Firemen’s Fair and before you knew it the City of Thibodaux, the firemen and rental companies started coming over. Since then we’ve been painting tents. It’s a challenge – it’s difficult to do – but when you’re finished it really gives you a sense of accomplishment,” Scott said.

Although most of the company’s orders come from within the Tri-parishes, calls come in from outside the area as well.

“I’ve driven vehicles down from the Northshore to get wrapped. T-shirt orders and sign orders come from there, too. If it can be shipped, it doesn’t matter where it goes. We do projects from all over,” Scott said.

The process of creating graphics begins with finding out what the customer wants and designing a look they’ll be happy with.

“Most of the time, when we do custom work, it’s like reading minds. They know what they have in their brain, they just can’t get it out, otherwise they would draw it themselves,” Scott explained.

Planet Graphics’ artists create each project on a computer working closely with the customer until the image is just what they had in mind.

Then the computer communicates with a cutting plotter that cuts images and letters out of sheets of vinyl. These images and letters are then hand-aligned and placed on signs, trailers, banners, vehicles or wherever a client wishes to place them.

Another form of graphic art showing up more and more is the vehicle wrap. This process calls for the entire surface of the vehicle to be covered in vinyl.

“It’s a misnomer. People think any kind of sticker on a vehicle is a wrap. They’ll say, ‘Wow! I just wanted some stripes down the side.’ That’s a graphic or a large format digital graphic, not a wrap,” Scott said.

Instead of cutting an image out of a vinyl sheet, wraps print on vinyl using ink that creates a chemical bond.

“The inks we use are specially designed to bond and dry onto that vinyl. It actually gets in the vinyl. If you scratch it, there would actually be ink in the vinyl. It doesn’t just lie on top and flake off,” Scott explained.

A vehicle wrap is no small undertaking.

The first step is to replicate a scale model of the vehicle in a computer program.

This is done so the customer will have a good idea of what the project will look like once it’s completed. It also helps the graphic artist design the wrap to scale so it will fit the vehicle when installed.

Designing the overall look of the vehicle wrap could take up to 20 hours to complete.

Add in the cost of the vinyl plus installation and the tab could be several thousand dollars.

“It’s a very large sticker and difficult to install. It involves working it into the curves and around the windows. It’s then trimmed and cut so that it looks like it came with the vehicle,” Scott said.

Most of Planet Graphics’ wraps are done in an attached warehouse.

“We don’t want the wind to blow and stick it before we want it to.

The warehouse also allows us to work at night or in the rain,” Scott said.

The Houma native explained if a customer decides to update a sticker or wrap in the future, or just wants it taken off because they wish to replace the vehicle, removal is no problem.

“The advantage to a wrap is if a company leases a vehicle or they go through vehicles frequently, when they go to sell it, just pull off the wrap. Other than the rubber trim, it will look like new again,” Scott said.

A few years ago Scott stopped saying ‘yes’ to adding new techniques to his services. He began to get concerned that his Planet Graphics employees would lose their artistic touch.

“Just so we don’t get so watered down we had to stop somewhere. Once we begin adding other skills then we have to neglect some of the stuff we’re doing now. If we got bigger, then we could add another department, but for right now that’s not in the works,” Scott said.

A staff cross-trained in a variety of skills is vital when the workload becomes heavy.

“We all mesh like gears. I think that it’s great that we have this level of talent because when things really pick up we really have to push,” Scott said.

It takes up to six months of training before Scott is ready to let new employees work free reign.

“First we have to find them, then train them, and then hope they stay with us. It’s frustrating for the people being trained because there’s a lot to pick up. It makes their first six months rough,” Scott said.

Scott describes his job as fun, challenging and sometimes very frustrating, but adds that teamwork really helps out.

Creativity, talent, craftsmanship and teamwork along with technology and communication with the customer are all part of Planet Graphics’ formula for success.

Is it also a formula for expansion?

“Multiple Planet Graphics would have already happened if the economy hadn’t kicked down a few notches. It took a little longer for the economy to affect us but it happened. It doesn’t look as if it has turned around but at least it has leveled off,” Scott said.

“What we’re concentrating on now is getting into the New Orleans and Baton Rouge markets. This is the only store we have but we’ll be opening another in the future,” Scott predicted.

Planet Graphics owner Christopher Scott shows off his company truck he wrapped in vinyl three years ago. Scott claims when the wrap is eventually removed, the truck will look like new. JENNIE CHILDS