Serving up happiness in a cone for 42 years

Officials not laughing at Spencer’s gifts 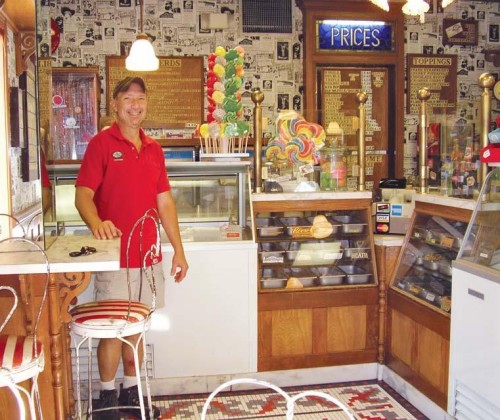 Downtown Houma wears a different face than it did years ago. Woolworth’s is now a bingo hall. JC Penney moved to the mall and the Bijou Theatre is just a memory to long-time residents.

On the corner of Barrow and Belanger Streets stood a Sinclair gas station.

The old gas station closed down but the building survived and on Easter Sunday 1968, Scarlett Scoop Ice Cream Parlor opened its doors for the first time.

Through the years the store had several owners but none stayed as long as current owner Bryan Nelson.

He began working in the ice cream parlor at the age of 15 and decided to purchase the business a few years later when the owner announced he was going to close.

“I bought the store in 1977 between my junior and senior years at South Terrebonne High School,” Nelson said.

The store had a different look back then. When Nelson took over he decided it needed a facelift and remodeled with a more nostalgic feel. He included an old-fashioned candy counter that brought back memories of his childhood.

As children, Nelson and his friends gathered empty Coca-Cola bottles and brought them to LeBouef’s Grocery Store on the east side of Houma for the return money.

“They wouldn’t give us the 2 cents so we’d trade for candy. As little kids we’d stand in front of the candy case just like the one I have now and pick out our 2-cent candy. Then Coke went up to a nickel per bottle so we could walk out with a lot of candy,” Nelson laughed.

“The spumoni that we have is not real spumoni. Real spumoni has nuts and fruit in it. Well the kids aren’t going to eat that so Brocato’s took them out for us. We’re one of the few places they make it for,” Nelson said.

The Scarlett Scoop blend is tutti-fruti, lemon and pistachio.

“I think it tastes like almond with a kind of fruit flavor,” the Houma native said.

Nelson also sells Blue Bell, Disney and Universal Studios ice cream. In addition, he makes his own flavors that have turned into some of his biggest sellers.

“I came out with Red Velvet Cake about three years ago and it’s taken off. Blue Bell got so many calls about the ice cream that they came see what it was. Blue Bell now tells callers ‘that’s Scarlett Scoop in Houma making it themselves,'” Nelson laughed.

Other creations are influenced by current events. A new favorite among Scarlett Scoop customers is Oil Spill ice cream.

The business owner planned on discontinuing the flavor once the BP well was capped, but Oil Spill is too popular to pull.

And for Mardi Gras, the flavor that started Nelson making his unique ice cream, King Cake.

“When I came up with King Cake ice cream it was such a hit that we started making other flavors. It just gives customers something different they can’t find anyplace else,” Nelson explained.

Original and unique flavors are bringing notoriety to Scarlett Scoop, but the ice cream parlor has always been known for its generous portions.

“We’ve always given a generous scoop of ice cream. It’s one of the reasons why we have the business we have. You never feel cheated here,” Nelson said.

Anyone who has ever tried to park at Scarlett Scoop will agree the ice cream parlor has outgrown the small building. But Nelson has no plans to move.

“You can’t get in and there’s not enough seating but if we would move to another location we’d lose all our business because people would say it’s not the same,” Nelson said.

Right after Nelson bought Scarlett Scoop he opened another store on Grand Caillou Road. He then took over the old Baskin Robbins store on West Park.

“I was running three stores and it was a lot to deal with so I decided to close the other two and concentrate on this one. That was 16 to 17 years ago now and it was the best decision I ever made,” Nelson said.

Besides selling scoops at the Barrow Street store, the ice cream parlor does catering for the Houma Civic Center and spring and fall festivals.

“We do the charity events like the Lady Bug Ball and Just Kids at Art and donate the proceeds back to the events. We also do the library club for the summer and the reading program at St. Francis. We bring out the red trailer for bigger festivals and Mardi Gras,” Nelson said.

The weekends used to be busier than the weekdays but nowadays parents bring their children in after school. Workers looking to treat themselves after a bad day at work are also regulars at the store as are Terrebonne General Medical Center and surrounding offices.

“We get people from New Orleans, Chackbay, Thibodaux and Galliano. We have a lot of customers from Cut Off and Galliano. Every time they come to Houma they stop in,” Nelson said.

The ice cream parlor owner has seen his customers grow up, get divorced, remarry and have children. Some tell him they used to come in with their grandparents and the ice cream parlor brings back memories of that time in their lives.

“And there are people who were kids at St. Mathews and now I’m waiting on their kids. They come in and I’ll say, ‘You know I used to wait on your daddy when he was your age.’ They’re like, ‘Wow! Oh man, that’s so cool!’ Then they’ll ask, ‘Was my daddy bad?'” Nelson laughed.

If or when he retires Nelson hopes to find someone who will dedicate as much time as he does to the store.

“I put in more time than most people would put into their business. I’m always here. I enjoy my business and my customers and that’s the reason why I do what I do,” Nelson said.

Bryan Nelson is the fourth owner of the Scarlett Scoop – a Houma institution since 1968. He began working there at 15 and bought the shop in 1977 when he was just 18. JENNIE CHILDS