Smoothie King exec adjusts to life in the franchise lane 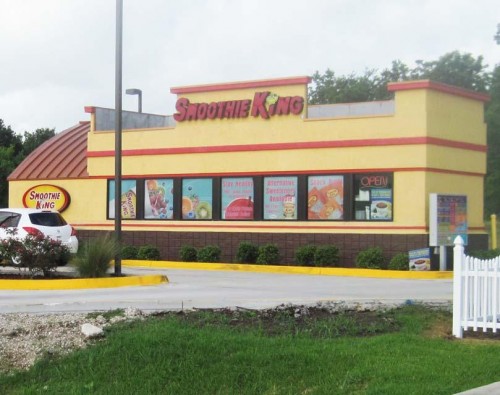 In the late 1960s Steve Kuhnau was searching for a way to relieve personal health issues through nutrition and invented the Smoothie King smoothie.

In 2003, Thad Allemand was looking for a new career after leaving the tugboat business and opened his first Smoothie King franchise in Thibodaux.

Allemand has been a fan of smoothies since his college years at Nicholls State University. Whenever he was in New Orleans, he’d stop by a Smoothie King and always thought a store in Thibodaux would be a good idea.

After graduating college, he worked for his dad at their tugboat company. From time to time, they would talk about opening a Smoothie King but never got around to it.

“We sold the tugboat company in 2001 and my dad retired. I was wondering what to do with the rest of my career and I decided, ‘Well, this is a good time to try that Smoothie King idea,'” Allemand said.

He contacted Smoothie King’s corporate office, began the process of acquiring a franchise, then searched for his first site.

He initially tried to buy two existing franchises in Houma but couldn’t reach an agreement with the owners.

“So I said ‘Alright. I’ll open one in Thibodaux,'” the business owner said.

Once the Thibodaux location was established, Allemand opened stores in Mathews and Galliano, followed by the two franchises he had previously tried to acquire in Houma – one in Southland Mall and the other on Tunnel Boulevard.

“The people who had the stores in Houma saw I was going to basically take over the region, so they sold them to me,” Allemand said.

The mall location suffered from a lack of weekday customers so Allemand decided to close it and open a new store on Martin Luther King Boulevard.

The new location fell in line with Allemand’s other properties, experiencing many of the same business patterns.

“We have a lot of people who use smoothies as a meal replacement – especially when they get the 32- and 40-ounce drinks. We have rushes at lunch, midday and evening,” Allemand said.

The smoothie stores follow basic franchise recipes but can make changes to suit individual tastes. One such change is to ‘Make it Skinny’ – replacing turbinado, a raw sugar, with a sugar substitute saving the customer 100 calories.

The menu is divided into six main groups – Stay Healthy, Get Energy, Trim Down, Build Up, Snack Right and Indulge.

The ingredients are printed on the menu and vary from group to group.

Enhancers give customers the option to include supplements with their treat. Enhancers contain ingredients the franchise claims boost energy, relieve stress, improve immunity, repair joints and tissue, and aid in muscle building and dieting.

Smoothie King recommends that only adults 18 and older use enhancers.

Fit N’ Crunchy bowls are a new product this year. The store offers six varieties of yogurt and sorbet topped with granola.

“It’s been steadily growing and it’s very good. The flavors include strawberry, blueberry and mango blended in a specific way only we do,” Allemand said.

“The whole point of it is to treat yourself to something that’s good and good for you. That’s what a lot of people don’t know. They think that smoothies are desserts. They’re not. They’re function-based drinks,” Allemand explained.

Success has Allemand looking at even more expansion. He recently purchased land next door to the Tunnel Boulevard location and has plans to move the store.

“I’m paying rent here. I don’t own this site so I’m beginning construction on a new building in about two months. It’ll be open Feb. 1,” Allemand said.

There’s even more expansion in Allemand’s future. He’s working on opening a Smoothie King in East Houma, another in Thibodaux and possibly Morgan City.

“I feel like if you’re not trying to expand, you’re going to go backwards. As long as it doesn’t hurt the existing stores too much, then we’re up for expansion,” the storeowner said.

The current economy has had an effect on Allemand’s business. He said this is the first year he’s experienced slower sales. But that isn’t slowing him down.

“Nobody has what we have and that’s why Smoothie King has been around for 35 years. There have been other smoothie places in town, but none of them have made it,” Allemand said.

“We have a brand name. Our smoothies are great for you and they’re great tasting,” Allemand said. “Everybody else can’t do that.”