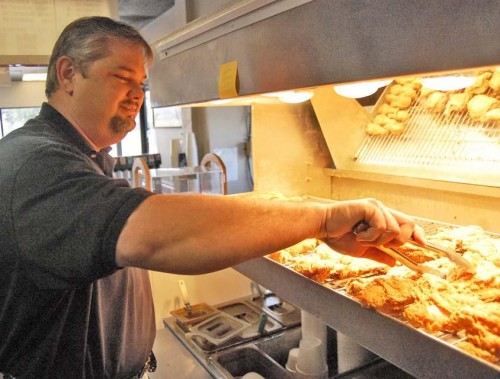 Sunrise Fried Chicken isn’t known for neon lights, brass and fern interiors or fancy commercials. Sunrise is known for home cooking that’s been around for the past 40 years.

“We’re the longest on-going restaurant in Houma. I don’t know of any other company that was here before Sunrise that’s still here,” said Jeff Gros, president of Sunrise Fried Chicken.

Arthur Breaux originally opened Sunrise in 1970 when the oil business was at its peak. The restaurant became successful by building a loyal customer base that has always returned, Gros explained.

That fact has had such an impact on the company that it was incorporated it into its slogan – “You’ll always come back for more.”

Gros started working for the Breaux family in 1993 in one of the restaurants. He worked his way up the ladder to supervisor, director of operations and, ultimately, became an officer of the corporation.

In 1998, Arthur Breaux passed the reins to son Alec Breaux. It was when Alec decided to retire that Gros began buying one restaurant at a time.

“I bought Sunrise because I believe in the company,” Gros said. “It’s a good product and I enjoy doing what I’m doing.”

When Gros started buying Sunrise restaurants, he’d have his wife run it. He continued buying restaurants until he ended up with all seven.

Gros says he’s happy and doesn’t plan to expand anytime soon. Besides, owning seven restaurants keeps him busy. His routine includes visiting each one at least two to three times a week to check in and take care of any problems.

A schedule like that means Gros works every day and more than 60 hours a week.

“If you don’t work seven days a week in the food business, you’re not going to make it,” he explained. “I learned that from Mr. Arthur. Saturday, Sunday, Christmas, Easter – he was in the office every day. He’s retired but he’ll call me two or three times a week. To me, this is still his baby. He watches me.”

Running a restaurant and doing it well is a challenge. Gros says his job is part skill and part art. He can teach anyone the skill but the art part “you just have to know. You just have to kind of feel your way through it,” he said.

Part of the art lies with the employees. They’re on the front line. They’re the first thing customers see when they enter Sunrise. Gros places a lot of credit for his success on his employees. Veterans with 14 to 30 years of experience are always ready to back him up. And the company CEO backs them up as well. He’s a firm believer in not asking employees to do something he won’t do. Gros is hands-on, no matter what the task. He recently replaced the floor of one restaurant then covered a shift in another.

Art, skill and consistency have contributed to a solid menu at Sunrise. “The fact that we haven’t changed the product means our customer base hasn’t changed,” he said.

The original Breaux family recipes are the backbone of the company.

The well-guarded spice mix has been kept a secret since 1970 and only a handful of people know the ingredients. Gros even has a private room where the one-of-a-kind spice mix is blended.

Those spices and recipes come together at Sunrise’s commissary at the Savanne Road restaurant. There, 84-year-old cook Eula Verdin readies poultry for sale, just as she has done since the company’s inception.

“She has it down where she doesn’t have to look at the recipe. She knows to add a little pinch of this or that to give it that little something extra,” Gros says. “I don’t know what I’ll do when she retires.”

Verdin makes everything fresh and from scratch. Her day begins at 4 a.m. and by 8 a.m., she arrives at the commissary and begins cutting sausage and de-boning chicken for gumbo.

Sunrise’s original recipes haven’t changed, but the menu has. Arthur Breaux started out with fries, chicken and rice dressing. The company has since expanded the menu to include onion rings, gumbo, red beans, white beans, etouffee, catfish and shrimp po-boys, crab patties, and plate lunches for the working crowd.

When Gros first started with Sunrise, he says the restaurant celebrated its 20th year with an anniversary deal. At the time, Sunrise had sold 30 million pieces of chicken. He estimates that figure has probably doubled by now.

According to Gros, most of Sunrise’s customers are age 40 or older. He says those repeat customers grew up with Sunrise and continue to visit his restaurants. Diets not doctors’ orders can keep them away.

“I’ve served customers that say, ‘You know, my doctor says I really can’t have this anymore, but I’m coming anyway,'” he said.

According to Gros, one customer – a former Houma resident – included a Sunrise stop before leaving town. “Kind of makes you feel good,” he said.

“I haven’t met anyone in the parish who hasn’t tried Sunrise Fried Chicken at least once. Never,” Gros added.