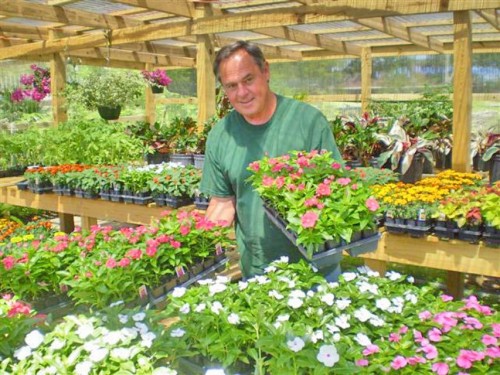 Regardless of who the owners were, the marquee name has always read Hebert’s Nursery.

The Thibodaux plant shop has been growing and propagating plants for retail size for 54 years.

First owner Robert Hebert, a Thibodaux resident for whom the shop is named, opened the nursery during the mid-1950s. At that time, current owner Charles Vidrine said it was one of the first retail plant and landscaping businesses in Thibodaux.

Hebert operated the business for 10 years before opting to sell. The new owners were Leo and Katherine Granier. The Graniers kept the Hebert’s Nursery name and continued the services they were providing to the community.

Vidrine started working for the Graniers in 1973. He was fresh out of college from Nicholls State University with a degree in plant science.

“Hebert’s was a place where people didn’t just buy plants, they learned some good information about gardening,” he said. “We all ended up being sales people, but at the end of the day it’s all about growing plants and showing your customers how to keep their plants healthy.”

It has always been Vidrine’s plan to enter into a gardening or farming profession because he’s dealt with it all his life.

Growing up on a farm, he believed plant science was a perfect fit. Not to mention that Nicholls had a great plant science department, he said.

“Growing plants and working on a farm is not that much different,” Vidrine said. “Either profession depends on the weather. They both have to be fertilized and watered. The only difference is that one is down in rows and the other is done in pots.”

After working under the Graniers for several years, he went into partnership with them in the early 1980s, taking on the day-to-day operations of the business. He became the sole owner after their deaths.

Throughout the years, Vidrine learned that business is highly seasonal. His peak months are March through May and August through October.

“Nurseries carry these risks and fluctuations when going into business,” he said. “There is no guarantee that there will be demand for the product because they are affected by temperature, drought, cheaper prices and fashion.”

In the last couple of weeks, he has seen a rise in his customer base because residents are getting out into their gardens, taking advantage of the cooler weather.

Hebert’s has three indoor greenhouses that are designed to protect young plants from harsh weather in the winter and summer months. Vidrine said they allow enough light and ventilation to keep the plants growing properly.

The other plants that don’t require protection are kept in outdoor beds. Hebert’s has one outdoor bed for its selection of decorative roses.

“It is important to take care of the plants while they are in your care,” Vidrine said. “I think that’s why we have stayed in business for so long, because we take the time to make sure that the plants are cared for.”

Owning a plant nursery is not just about growing plants. Some nurseries provide landscaping services. When Hebert’s Nursery first begann it had a landscaping component.

Vidrine discontinued the landscaping service when he took ownership, saying he preferred to focus on the retail side.

“The more information we give them, the more successful they’ll be with their own gardens,” he said. “We have been able to get along without having to use landscaping to up our business. We wanted to focus on what the people needed on the retail side.”

It is about giving customers the knowledge they need to gain “the green thumb” of gardening, he said.

“I have to say, he gives the customers very good advice about their purchases,” Vidrine’s wife Gail said. “He tells them exactly what they will need to keep that plant healthy and growing for years to come.”

Hebert’s Nursery has been servicing the community’s gardening and landscaping needs for nearly 55 years. Owner Charles Vidrine says it is important to give customers as much knowledge as they will need to produce healthy plants. * Photo by SOPHIA RUFFIN