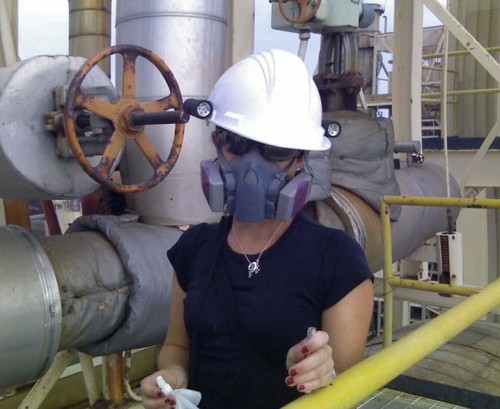 Ask Average Joe what an environmental consulting and testing company does and you’ll probably be faced with a blank stare and a shrug of the shoulders.

When a public building is damaged by natural disaster, fire or some other event, reconstruction or demolition cannot begin until it has been determined if the debris in the structure is safe for removal.

If asbestos or mold are present, the days of leaving debris on the side of the road for pickup are long gone. It has to be removed in a manner that won’t injure the workers doing the cleanup or pollute the environment.

It’s the folks at Weir Environmental who evaluate the damage, work up a plan to remove any hazardous materials and make sure the debris is disposed of properly.

At the helm of Weir Environmental is Amanda Weir. She graduated from LSU with a degree in biology and thought her life’s work would be in the medical field. A stint volunteering for her uncle at Southeast Neuroscience Center in Houma convinced her otherwise.

“One day he said, ‘Let’s go to the hospital and do a spinal tap.’ I nearly passed out so I said, ‘Maybe I shouldn’t do this.’ It just wasn’t for me,” Weir said.

Two weeks after graduation and living in New Orleans, Weir was forced to evacuate to her parents’ home in Houma when Hurricane Katrina hit. She had enough clothes for a week or two and no job.

Weir worked with one other employee out of a bed and breakfast and a van and spent her days chasing work in the hurricane ravaged city.

The pair landed a contract with the State of Louisiana Facility Planning and Control to do the environmental remediation at Delgado Community College in New Orleans.

Environmental remediation is subject to state and federal regulations and deals with the removal of pollution or contaminants from a site intended for redevelopment.

“We basically did environmental assessments of every single building on campus. We wrote a protocol for the remediation then managed and oversaw the process. Finally we did testing in the buildings before releasing them back to the campus for re-occupancy and reconstruction,” Weir explained.

By 2008, things were slowing down for RGA and the company decided to pull out of the New Orleans area.

“They (RGA) asked what I wanted for severance and I said I wanted equipment instead of taking any type of monetary severance package. I got my severance in things I would need to start my own business. They referred any calls for work they had in this area to me and they still continue to do so,” Weir said.

The ink on her business cards wasn’t dry when Hurricane Gustav hit two weeks later. Weir had just returned from a national conference where she met national emergency response restoration contractors and they began calling her to Baton Rouge to do asbestos surveys.

“It’s kind of the same thing as what happened with Katrina. They can’t start the remediation or the mold part of it or the water damage part of it until they find out if the materials have asbestos or not,” Weir said.

A couple of weeks later along came Hurricane Ike and the calls from Houston came pouring in. It soon became overpowering for the Meraux native and she ended up sub-contracting almost 90 percent of her business that first year.

Weir evaluates damaged buildings using an infrared camera and moisture meters to find moisture. She also locates asbestos by taking samples of building materials throughout the structure. Weir then writes a protocol for the remediation and many times assists the building owner through the bid process.

“We will stipulate into the bid documents that they have to be a licensed mold remediation contractor in the State of Louisiana and licensed asbestos abatement contractor. They usually have quite a few other submittals they’ll have to turn in like all of their worker documentation to show that their workers have been trained and that they’re licensed to do the work in Louisiana,” Weir said.

When it comes to hazardous waste removal, the government has plenty of regulations designed to protect the public. Weir has to be fluent in them all.

The Occupational Safety and Health Administration (OSHA) looks out for employees working with asbestos as well as lead. Weir explained that OSHA sets exposure limits and it’s up to employers to make sure their employees are not exposed beyond those limits.

National Emission Standards for Hazardous Air Pollutants (NESHAPS) has to do with visible emissions.

“Let’s say you’re doing a demolition of a property. You have to make sure the asbestos is removed prior to doing the demolition. You can’t have a whole bunch of dust. You have to keep the demolition debris wet and the disposal of the materials have to be done under the proper waste manifest and brought to the proper landfill,” Weir said.

“It’s almost like being an attorney and interpreting because it’s not just black and white. It’s the code of federal regulations and you have to interpret what they mean and people have different interpretations.”

“They also have a protocol for samplings. So if the material is on a wall, you need to take a certain amount of samples. Materials like a ceiling tile or floor tile need to take a minimum of three samples.”

Most of Weir’s business is through referrals and her customers are primarily commercial, education, government and public agencies. She’s done work with the postal service, USDA and the Army Corps of Engineers.

“That was a project I started working on with RGA. Because they took on so many people after Katrina, the carbon dioxide levels in the office building were high, so people were having headaches. So we did multiple air quality studies throughout the building and we showed them where they had high spots. They made adjustments to their air conditioning system so they were getting enough air flow for the amount of people they had in the building. It was very interesting,” Weir explained.

Weir researches all the prior uses of the property, and the neighboring properties, looking for contamination or environmental issues so the bank doesn’t take on an unwanted liability.

“One of our big projects is with Terrebonne Parish Consolidated Government for the properties that were damaged during Hurricane Gustav. We do the asbestos surveys before the demolition contractor comes in and does the demolition. We go down the bayou and my sister has sent me pictures of alligators in the road calling them, ‘Dularge road blocks,'” Weir laughed.

“I’ve had people call me and say they need silica monitoring for their employees and they’ll say can you do it? Sure. I’ll be online or calling different people who have been mentors along the way and say, ‘I need help. Can you walk me through this process?’ It’s definitely been a learning process.”

“They do have training classes. For each discipline I have, I had to go to classes ranging from three to five days and then every year we have to do refresher training. So if the laws change, they update you,” Weir said.

Weir has licenses across the Gulf Coast would like to see her company expand and do more projects in other states.

“I’d like to get into the oil and gas industry. We really haven’t broken into that market so that’s something we’re working on now. I’m glad to be able to provide jobs for people and be able to help people. I’m looking forward to growth.”

Amanda Weir got her start with RGA Environmental after Hurricane Katrina swamped New Orleans. When the company left the area, she took her severance in equipment so she could open her own company, Weir Environmental. COURTESY PHOTO