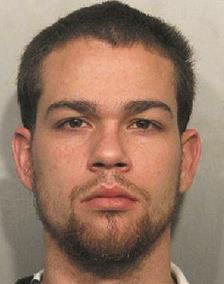 A Houma man is in custody of the Houma Police Department after he allegedly attempted to cash altered checks.

On April 17 at approximately 2:30 p.m., HPD responded to a local bank on Barrow Street in reference to a report of a suspect attempting to cash altered checks.

When officers arrived, they encountered Cody Brown, 24, of Houma, and detained him for questioning.

Through investigation, officers learned that Brown allegedly received a $70 check, but altered the amount to read $3,070, then tried to cash it.

Authorities also learned that the suspect had previously cashed a check he received in the amount of $120, but which he allegedly altered to read $1,120. Brown was arrested and taken to the Terrebonne Parish Jail. He is charged with multiple counts of monetary instrument abuse.

A 26-year-old Larose man is in custody of the Lafourche Parish Sheriff’s Office after he allegedly started a fire, which totally burnt two Golden Meadow houses and which damaged another.

On April 14 at around 6 a.m., LPSO was called to a house fire at a residence off La. Highway 1 — just south of the Town of Golden Meadow’s limit.

Firefighters also were called to the scene and they extinguished the fire during that morning.

Authorities said no one was injured in the fire, but two homes in that area were deemed total losses by LSPO. A third was also damaged.

Through investigation, LPSO learned that Jake Savoie, 26, of Larose, was at the scene of the fires prior they started.

Authorities made contact with the suspect and questioned him about the incident.

He was arrested and taken to the Lafourche Parish Detention Center in Thibodaux on charges of aggravated arson of an inhabited dwelling and two counts of simple arson.

He is out of custody awaiting trial after posting a $15,000 bond.

The Terrebonne Parish Sheriff’s Office is asking for the public’s help in finding the suspect(s) responsible for an armed robbery, which took place at The Dollar General Store in Schriever on April 19.

TPSO said on the above date at approximately 10:30 p.m., authorities were called to the store after a worker called and reported a robbery.

Deputies arrived at the location and the suspects had already fled the scene. Detectives said they received information that the store had closed, but employees were still inside.

When the workers were about to lock the front door, the suspects allegedly approached them, initiating the robbery. One of the suspects had a silver handgun and the second was allegedly carrying a black backpack.

The suspect with the gun was a male, according to the victims, and he allegedly pointed the gun at the employees and forced them to open the door so they could enter the store.

The armed suspect then allegedly threatened to shoot the store employees if they did not give up the money at the location.

The suspects led the employees through the store and to the cash register, and the employees gave the suspects an undetermined amount of cash, which was placed into the backpack carried by the second suspect. Both suspects were dressed in all black and their faces were covered.

The armed suspect was a tall black male and the suspect carrying the backpack was shorter, and is believed to be a black female.

Tips which lead to an arrest may net a cash reward.

TPSO: Suspect beat woman with iron pot, then locked her in shrimp boat

A 56-year-old Dulac man was arrested on Tuesday night after he allegedly beat a woman with an iron pot, then locked her inside the cabin of his boat. At approximately 9:30 p.m. on the above-mentioned date, Terrebonne Parish deputies responded to the 8900 block of Shrimper’s Row regarding a domestic violence incident. Once on the scene, authorities made contact with a 46-year-old female victim.

She allegedly told deputies that the incident started on a shrimp boat where she and Michael Ronquillo, 56, of 236 Orange St., Dulac, had lived together for the past year. The victim said the altercation started as a verbal argument, but it then turned physical.

Authorities said Ronquillo beat the victim with an iron pot, then locked her inside of the cabin of the boat. He allegedly used a padlock on the door to prevent the victim from being able to leave.

Authorities said the victim suffered injuries to her hands, wrists, forearms, lower back and feet in the incident. One of her teeth were also knocked out, according to TPSO.

Acadian Ambulance arrived on the scene and treated the victim, who was later taken to a local hospital for treatment for her injuries.

Authorities said they questioned Ronquillo, and he denied beating the woman, but allegedly admitted to locking her inside.

He was arrested after questioning and is charged with aggravated battery, domestic violence and false imprisonment.

The Lafourche Parish Sheriff’s Office will conduct a seat belt checkpoint today in conjunction with the state’s “Buckle Up In Your Truck” campaign, which lasts from April 21-27. The check point will take place in the daytime hours, and deputies will be inspecting motorists to make sure that they are properly wearing their seat belts, as well as checking for insurance and inspection stickers.