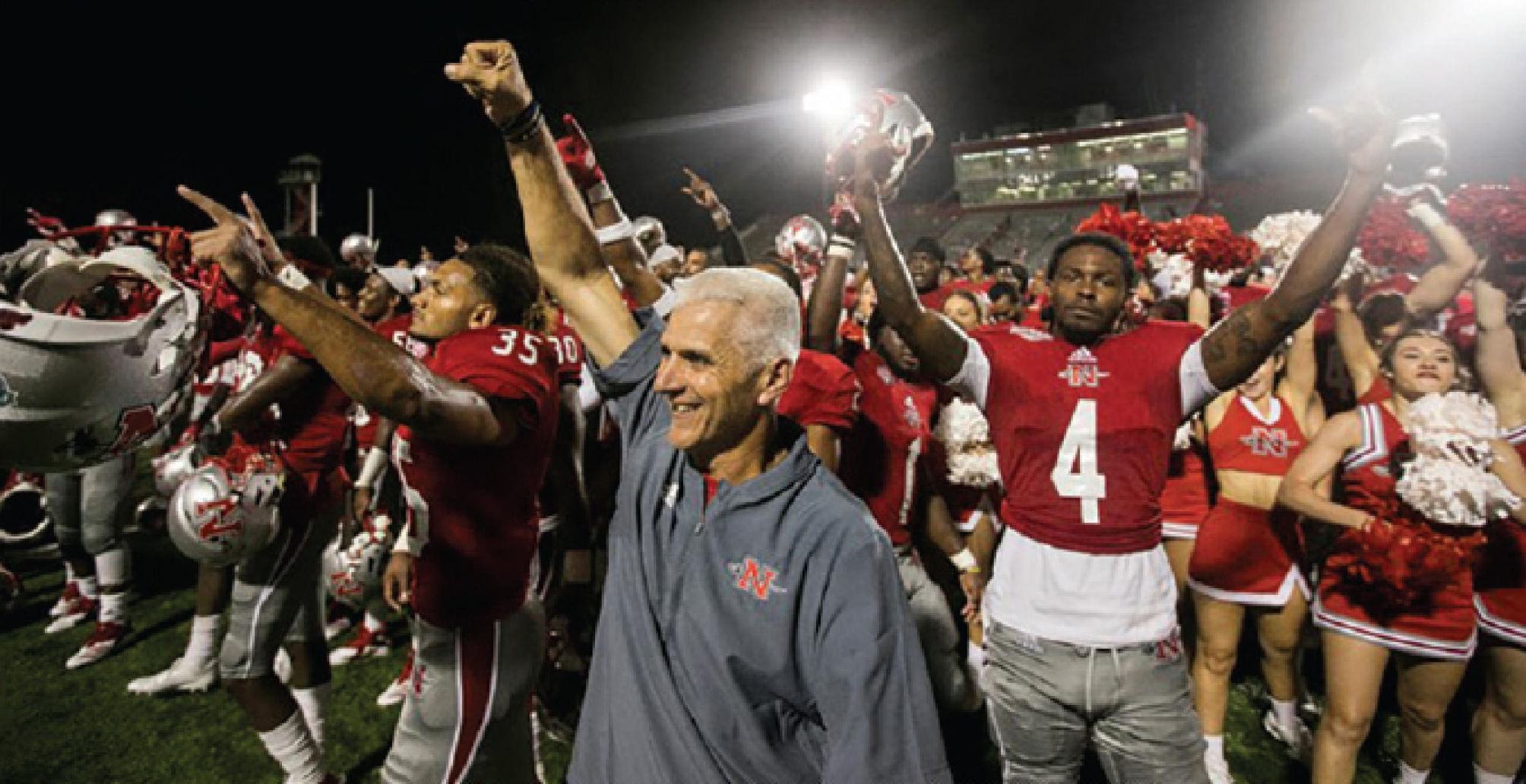 It’s safe to say that the rumors of Nicholls football’s demise have been greatly exaggerated.

The Colonels crushed Sam Houston State on Saturday night 27-7 — a dominant victory which firmly positions the Colonels bade in the thick of the hunt for the Southland Conference Championship after a loss at McNeese State last week.

The win was Nicholls’ first against the Bearkats since 3005. It was the team’s first win against a PCS Top 25 foe in a decade. It also was an elixir for a Colonels team which had started 1-2, but hadn’t yet enjoyed the-comforts of home.

The start of Saturday’s game was delayed several tunes by lightning, but once the storms blew away, it was the Colonels’ defense that was electric — a unit which dominated the game, according to coach Tim Rebowe.

“I thought our defense was great” Rebowe said. “To hold a team like that with what they’ve done in the post and how explosive they are, to hold them to 7 points, it was a pride thing. Our guys know that we’ve been giving up some yards and last week we gave up some paints, so we tried to get out there and shut them down. I thought we won it up front”

The Colonels struck first on a short field goal from Lorran Fonseca to go up 3-0. But the Bearkats fought back, taking the ball down the field for their most successful drive of the game — a 10-play. 70-yard drive capped by a 19-yard touchdown pass from Alike Dare to Davion Davis to go ahead 7-3 at the end of the first quarter.

But the rest of the game was all Colonels.

In the second quarter, Nicholls’ defense started to take over; forcing Sam Houston State into one empty possession after another.

The Bearkats held for a while, but the chain broke late in the half on a 10-play, 74-yard drive capped in a 12-yard touchdown pass from Chase Four-cade to Damion Jeanpiare winch put Nicholls up 10-7 at half time.

In the second half, the trend stayed the same.

Time after time, Nicholls’ defense pushed back Sam Houston’s offense — a direct contrast from last year’s meeting between the teams in which the Bearkats scored 66 points and both rushed and passed effectively throughout the win.

This time around, the Colonels weren’t having any of it. They limited the Bearkats to just 819 yards of total offense, while forcing two turnovers. Nicholls consistently won first down plays, which put Sam Houston State against the chains, forcing them to go against their gameplan.

Bearkats coach K.C. Keeler said the Bearkats were also without three starting offensive linemen, which he believes was a huge factor in the game.

“We’re a different offense right now with those three linemen down,” Keeler said. “Two of the best tackles in the country are out right now and Tyler Edwards, who is an All-Conference-level guard. So they were able to get a lot of pressure on us. We’ve got to figure some things out And change some things up because obviously, who we thought we were going to be, we’re not that team right now, We’ve dug ourselves in a hole. We’ve got to dig ourselves out of a hole.”

On Saturday, the Bearkats never were able to “dig out of that hole.”

Nicholls added to its lead midway through the third quarter on another short field goal by Fonseca to go up 13-7.

That score held until late in the game as the teams went back and forth with empty possessions, trading body blows before the Colonels landed the powerful overhand right they were looking for.

Late in the fourth quarter, the Colonels put the game away, a 9-play. 59-yard drive capped with a short touchdown run from Dontrel Taylor to go up 20-7.

After the Colonels forced a turnover on downs at the Bearkats’ 2-yard-line on the next possession. Nicholls added the icing on the cake — a 2-yard score from Kendall Bussey to send the game to its final margin.

Ground offense was big in the win for the Colonels. Nicholls rushed for 218 yards, while limiting Sam Houston to 58.

Kyran Irvin carried 14 times for 73 yards, while Taylor had IS carries for 66 yards and Buseey had IB carries for 46 yards.

Quarterback Chase Fourcade was 15-of-28 with 197 yards and a touchdown, but he, too, was good with his legs, rushing 9 times for 60 yards.

The Colonels will host Lamar on Saturday at home.

The Cardinals are 1-3 on the season. They lost 30-24 at home against Southeastern Louisiana on Saturday.

Nicholls football coach Tim Rebowe smiles with pride while saluting the team’s fans after a win over Sam Houston Saturday night. The Colonels are now 2-2 on the year.