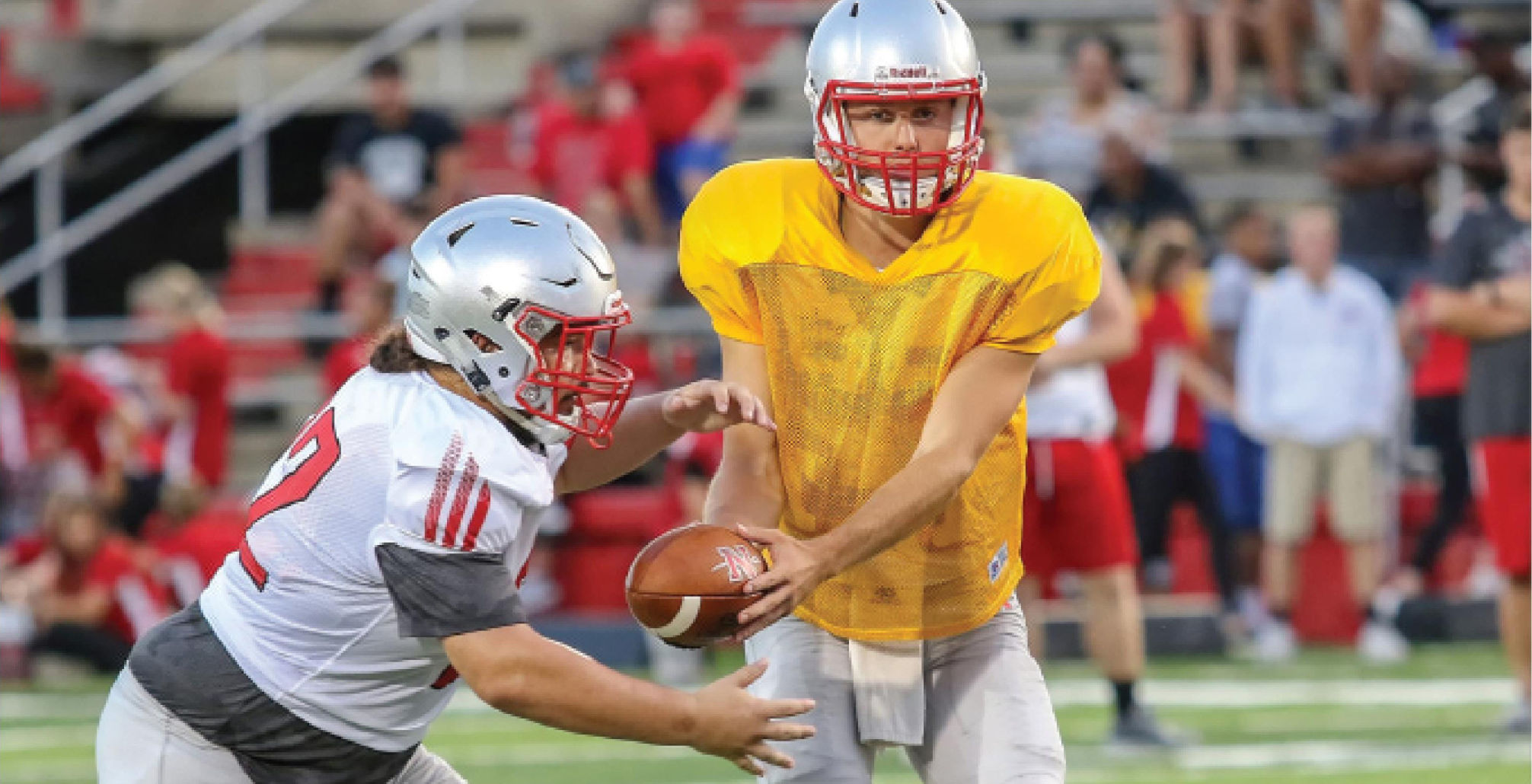 ONE OF THE ‘ORIGINALS’ ENJOYS THE RIDE

The Nicholls State University football team has come an awfully long way in the past half-decade.

No one knows that more than Cut Off native and Colonels senior Mason Boudreaux.

He’s seen it all first-hand and has helped deposit his blood, sweat and tears into the process — all while sacrificing his body to help make plays for the team.

Boudreaux is one of a handful of Colonels who were part of both the old regime under Charlie Stubbs and also the new regime under coach Tim Rebowe — a small group that’s seen the Colonels rise from 0 wins in 2014 to a spot in the playoffs in 2017 and a Southland Conference Championship in 2018.

Boudreaux is an undersized running back/fullback. His work ethic embodies the Colonels spirit. He said seeing the program transform has been memorable and a ride he will never forget.

“It’s been unbelievable,” Boudreaux said. “After going 0-12 my first season, I did not think winning conference would be in the picture. Thankfully, we have a great coaching staff that guided us from last place to conference champs in just four years. It makes me proud of my choice to sign as a Colonel back in 2014.”

Boudreaux has football in his blood.

He was a four-year letter winner at South Lafourche High School and a two-time All-District performer as defensive lineman on the back-end of his prep career.

As a Tarpon, Boudreaux was an interior defensive lineman. He disrupted the game at that level, but he stands just 5-feet, 10-inches and weighs just 245 pounds. He knew that he was likely too small to be a lineman at college and not quick enough to be a linebacker.

But the passion to play still burned bright, so he moved to the other side of the ball to keep his career alive.

Boudreaux signed with Nicholls in 2014 after fielding interest from other Southland programs during the recruitment process.

He appeared in seven games in Stubbs’ final season, playing a hybrid fullback/H-back position in the team’s spread offense.

Boudreaux was injured in 2015 and had to miss the entire season — Rebowe’s first with the team.

He came back in 2016 and started to find a role in Nicholls’ offense. In 2016, Boudreaux found a niche as a short-yardage runner for the Colonels. He played 10 games and had 41 carries for 148 yards and three scores. He carried 21 times for 85 yards in a win at Northwestern State and powered forward for two touchdowns in a win against Lamar.

Rebowe said before the 2017 season that he loved Boudreaux’s determination.

“He’s a competitor,” Rebowe said. “He’s a good practice player and he gives you everything he’s got on every play. He’s been good for us in the red zone and in short yardage. He’s a big, strong Louisiana boy. He loves to compete and play.”

After the 2016 success as a redshirt sophomore, Boudreaux had eyes on a big-time role in 2017 — a year that folks in the Colonels’ Nation knew could be special.

But then adversity struck again.

In Nicholls’ second game of the year at Texas A&M, Boudreaux’s body contorted the wrong way and he felt a pull, then a pop.

He tore his MCL and meniscus, which meant that his entire 2017 season was now over and the rest of his football career was in jeopardy, too, if rehab wasn’t successful.

While the Colonels rolled through the regular season and into the playoffs, Boudreaux sat on the sidelines and watched — unable to help his team in the biggest games of the season.

Boudreaux said the 2017 season ended and preparation for 2018 began and he still didn’t quite feel right, adding that he had to really go the extra mile in rehabilitation to get back to the field.

“It was a long recovery,” Boudreaux said. “I used crutches for 2 months because I wasn’t able to walk. I went to physical therapy multiple times a week and pushed myself to gain strength and stability back in my knee. I was able to participate in spring ball, but I was still limited. It wasn’t really until summer workouts that I felt back to normal all the way.”

But Boudreaux’s hard work, pain and blood, sweat and tears did pay off.

In 2018, he got back on the field and helped finish the team’s journey from the bottom all the way to the top.

Boudreaux played 7 games this season as a reserve back in Nicholls’ running back-heavy offense.

Rebowe said that though the stats may not pop off the sheet, Boudreaux’s efforts in practice and in preparation are appreciated and valued — a big part of why the Colonels were able to make the run they’re on now.

Boudreaux said that while he’d, of course, have loved to play more, he’s just grateful to have made it back on the field for his senior season.

By doing so, he guaranteed that he’d forever be able to tell his friends, family, future children and grandchildren that he was a part of Nicholls history.

“It’s unforgettable,” Boudreaux said. “I have made so many great memories throughout the season with the friends I’ve made over the years. I feel proud of our team’s accomplishments. I couldn’t imagine a better way to finish the last season of my football career than winning a Conference Championship and making it to the Playoffs again.”

A handful of Players have been able to see Nicholls’ full transformation first-hand – a trek form 0 wins in 2014 in a playoff win in 2018 One of them is local Mason Boudreaux, But what makes Mason’s story great is that while it’s all taken place he’s also grown as a man and has had to endure physical injuries to push forward with his team.