Gibson Man Arrested on Charges of Indecent Behavior of a Juvenile

Nicholls to host book signing for ‘Return to Heartwood’ 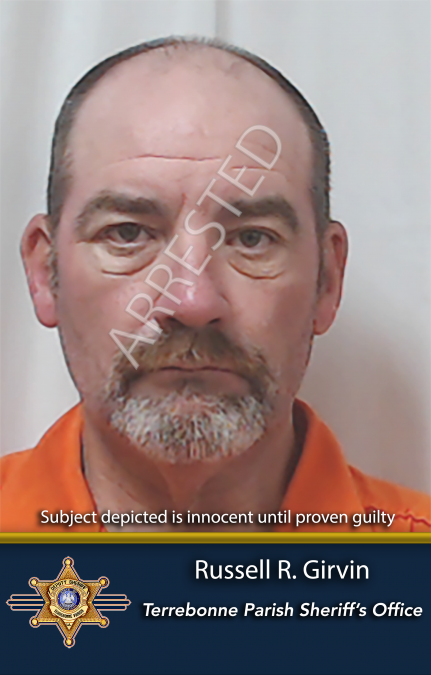 Terrebonne Parish Sheriff Tim Soignet announced that a Gibson man has been arrested in connection with a juvenile sexual investigation being conducted by Detectives of the Special Victim’s Unit of the Terrebonne Sheriff’s Office. Russell Robertson Girvin, 54, of Gibson was arrested on charges of Indecent Behavior of a Juvenile in connection with the case.

On November 3, 2022, the Terrebonne Parish Sheriff’s Office Special Victim’s Unit (SVU) began investigating allegations of sexual misconduct from a juvenile victim who reported receiving inappropriate communications from Russell Girvin. During the investigation, Detectives were able to confirm evidence of the communications, which linked Girvin to the investigation.

Detectives located Russell Girvin, who was brought in for questioning and substantiated the communications with the juvenile victim. Russell Robertson Girvin was arrested and booked into the Terrebonne Parish Criminal Justice Complex on charges of Indecent Behavior with a Juvenile and remains jailed on a $10,000 bond by local judges.

Sheriff Soignet is extremely proud of the investigative efforts of the SVU in solving and arresting this offender, “I am very passionate about protecting the children of our community, and this type of behavior will not be tolerated,” the Sheriff said.

**All arrested persons are presumed innocent until proven guilty**