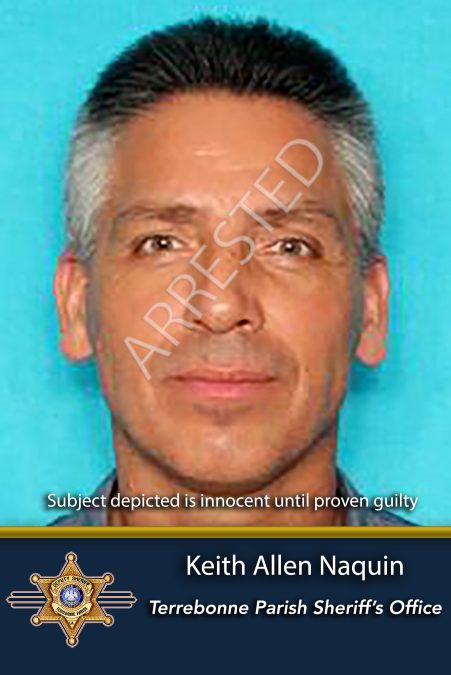 The Special Victim’s Unit began an investigation on January 5th, in response to allegations of rape alleged against Naquin, which were made by at least 2 separate victims.  The Special Victim’s Unit interviewed the victims, which are not being identified at this time, who provided details to Investigators of Naquin committing acts of rape against each, in the year 1994.  Investigators completed extensive interviews with each victim, as well as completing additional interviews with several witnesses connected to the cases.  Throughout the investigation, Detectives learned that Naquin served as a clergyman during the time frame of the allegations, at a local church in the Montegut area.

At the end of the interviews, Detectives discovered information and evidence to substantiate that the allegations were true and obtained warrants for the arrest of Keith Naquin for charges of 1st Degree Rape, through the 32nd Judicial District Court.

On January 12, 2023, Detectives located Keith Allen Naquin at his home, in Montegut, and was brought in for questioning.  Detectives interviewed Naquin, who admitted to knowing the victims but denied the allegations, before invoking his right to an attorney.  Detectives later arrested Naquin, who was booked into the Terrebonne Parish Criminal Justice Complex on his outstanding warrants, with a $200,000 bond by local judges.  Naquin was later released from custody after completing the bond process.

Sheriff Tim Soignet would like to remind the public that this is an ongoing investigation, and there is a possibility that additional victims have yet to be determined.  Additional information will be released as it becomes available.

Sheriff Tim Soignet, as always, asks for patience and privacy for the victims affected by this investigation.  Sheriff Soignet said, “Our agency Investigators are continuing to work through this very difficult and disturbing investigation.  One of the major concerns is to determine whether or not any additional victims are present, and to deal with that circumstance accordingly.  The actions of this suspect are not only upsetting to those involved but can cause problems for an entire community.  I am confident that our Investigators will do what in necessary to ensure that this offender is brought to justice.”