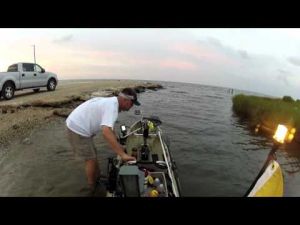 As high-quality video equipment has proliferated, so has its use on the water as a measure to prevent rolling eyes as tales are recounted. Captains Danny and Kristen Wray, of Calmwater Charters in Grand Isle, noticed the trend and last year introduced a fishing film festival to complement their blossoming kayak tournament.

“There are so many people, especially kayak fishermen, who love to get out and film themselves fishing,” Kristen Wray said. “Some of it is, you’re out on your own and you want to prove to your buddies that you actually caught what you said you caught. And then they see amazing things, but when you try to describe it to someone else, it kind of loses something in translation. … (The videos) psyche people up to go fishing.”

Calmwater accepts video submissions throughout the year before narrowing the entries to 10 finalists, which are shown at night on a projection screen outside Bridge Side Marina.

The festival has almost no restrictions, other than a five-minute maximum limit, a ban on nudity and copyrighted material and a caution against excessive profanity. Entries can be of any type of fishing and can be shot anywhere. They are submitted through YouTube.

“Most people don’t understand what kayak fishing is all about, and I wanted to show people,” said Kiefer, a New Orleans native now living in Prairieville.

Kiefer said he has made about 15 videos with a camera fashioned to a mounting system on his kayak’s aft. Four such videos, including the first-place movie, are on his YouTube channel: TPK1975.

Referred to by his peers as “Gadget Man” because of the remote-control lights, GPS system, depth finder and floorboard lighting outfitted to his vessel, Kiefer’s mounted GoPro camera has 360-degree capability, which he controls with a hand-held remote. He uses iMovie to edit his films.

Because he is still recovering from an April car accident, it’s unlikely Kiefer will submit a video to defend his title, he said.

Even in his absence, there will likely be quality videos shown. Last year’s finalists included a 3-minute look at fishing as therapy to wounded veterans and underwater tracking of mahi-mahi off Navarre Beach in Florida, among other crisply edited films.

Producers of both the audience’s favorite and the best film as determined by a panel of judges receive GoPro cameras.

Like the festival that complements it, the Wrays and their friends innovated Ride The Bull, one of the state’s most-popular and –creative kayak fishing rodeos. Last year, Ride The Bull 3 attracted 261 kayakers, all of whom piled into Caminada Pass for the tournament. A month out, 220 people had registered for RTB4. “We’re hoping for about 400 kayakers,” which would make the rodeo the largest kayak fishing tournament in the nation, Kristen said.

A classic example of perfecting something that is limited in scope, the rodeo targets one species – the bull red, or redfish that are at least 27 inches long. And fishing is bound to Caminada Pass, concentrating the activity in one area.

“It’s an amazing sight. It’s as much a spectator sport as anything else,” Kristen said. “You can get up on the Grand Isle Bridge (on pedestrian walkways), and you can actually watch all the guys and fish.” Some competitors even solicited tips via cell calls from “spotters” on the bridge last year, she added.

Given that participants target large fish from kayaks, the spectators can also witness what Kristen calls “the Cajun sleigh ride.”

Kiefer, vice president of the Bayou Coast Kayak Fishing Club, bought his first kayak about three years ago to combine fishing and exercise. He’s spent 12 hours in the paddleboat on some occasions and said a few of his excursions have eclipsed 10 miles (“Some people think that’s a little extreme,” he mused). Of course, as a kayak enthusiast, he is an RTB veteran.

“The most exciting part I think is the amount of people who actually participate,” Kiefer said. “When you’re out there and you see this many people within such close talking distance to you … it’s a total different type of kayak fishing than going into the marsh, or something like that, by yourself when you’re isolated. It’s really a great experience.”

Cash prizes are given to the team that catches the most bull reds, the top-10 by weight and the heaviest fish caught by ladies and juniors. The tournament is catch and release. Registration is $50.

This year demo GoPro cameras are handed out to various participants. These kayakers – and any others who have their own video equipment – turn in their memory cards after the event. The person deemed to have captured the best footage is awarded a camera.

The film festival begins at 8 p.m., Aug. 16 at Bride Side Marine, 1618 La. Highway 1, Grand Isle. Admission is free, but those who want to dine while watching the films are charged $15 for a meal. For more information, visit www.calmwatercharters.com.