Despite losing in state finals, Vandy girls are winners 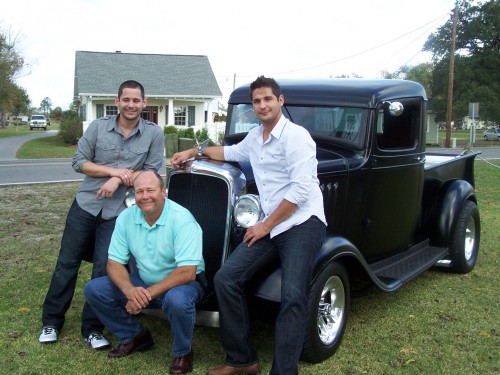 Where some see a heap of metal, Jesse Bordelon sees a masterpiece under the rust. His love of vintage cars, muscle cars and rat rods sparked in his teens at the sight of a 1935 Chevy pickup truck. What started as a family project with his father ignited a lifelong hobby.

Bordelon still owns the 1935 Chevy, holding irreplaceable memories of his father that he refuses to part with. The Larose resident treats his refurbishing like an art form and said the cars have a way of finding him and taking on a new life form.

“I’ll usually be driving down the highway and start looking in people’s yards or out in the fields and mark it in my mind,” Bordelon says. “I’ll knock on the door and see if they are interested in selling and I’ll usually let my other friends know I found something. Typically, it’ll find me. If it’s really unique or radical I’ll start thinking of things, but it tends to build itself. You think you’re going to do it one way, but as you go along it’ll just build itself.”

Since the Chevy pickup truck, Bordelon says he has reconstructed and restored about 25 cars. He has two in his workshop at the moment, a 1927 Ford coupe and a 1919 Dodge coupe, which he hopes to unveil at the car show hosted by Boneyard Kreepers benefiting Make a Wish Foundation March 3 in Galliano. Bordelon attends and participates in roughly 10 car shows every year and enjoys showing his work.

“It’s fun seeing what you can create with your hands and taking time to do something, and then you bring it and people see it and tell you how good it looks,” he says. “It gives you a sense of appreciation when others start telling you that and you realize what you do is a gift. It’s a gift from God, and I share the gift with others. I bring others in that aren’t as skilled and teach them the craft. I started with my sons and moved on to friends to help them develop.”

Bordelon enjoys meeting with his friends to work on new finds or recreate previous ones. He creates his own engines and welds together many parts, typically only purchasing tires and necessities of the sort. It’s the art of the technique he enjoys and has no qualms in selling once a project is completed.

“My goal is not to own, but to drive,” Bordelon says.

He continues to keep up his art with the same passion he had in his teens. New projects are always creating themselves and Bordelon sees no end in sight.

– Esther Ellis is a freelance writer.

Jesse Bordelon, with sons Jesse Bordelon III and Brandon Bordelon, squats in front of a 1935 Chevy pickup truck his father purchased when Jesse Jr. was in his teens.