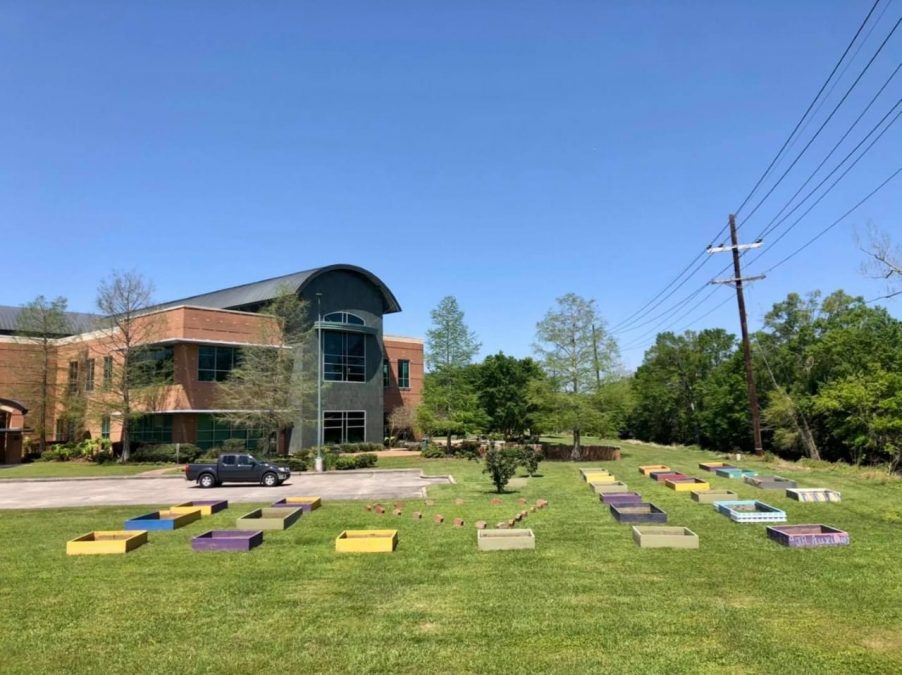 Editor’s Note: The grand re-opening of the Community Garden is postponed due to inclement weather. We will post an update as soon as it is rescheduled.

The Harmon Park Community Garden is being re-planted at the main library branch in Houma. New buds will soon billow beneath a building that blossoms with books.

“When we were in the meeting, they were telling us that the Harmon Park Garden wasn’t situated in a good home anymore. We started talking about other places to put it. We still wanted to keep it in this Downtown Houma area, so we were still serving the same community. So, we started talking about maybe moving it to the library. I then presented it to my board and directors. They loved the idea and we just moved forward from there,” Kati Callais said.

Thus, the garden will grow amongst similar onlookers and volunteers at its new home. The fresh location will increase reachability for the public.

“The garden will be more accessible to the community,” Callais stated.

Callais is the Community Outreach Coordinator for the Terrebonne Library System. She educates about the intricacies of the library and the programs they offer. Callais also acts as a liaison between the library and the community. She edits communal needs and networks with possible partners to build programs like a climatic book with a happy ending.

“My whole job is to find people in the community to work with, so we can do these bigger programs together,” Callais said.

The collaborative efforts between the library and bonding agencies warranted the movement of the Harmon Park Garden to its new parcel of land.

The ‘Live Healthy’ bureaus interaction with the library and other local commissions has deputized healthful initiatives for the citizens of Houma, Thibodaux, and beyond the bayous.

The re-homing of the garden will be the inaugural relationship between the Terrebonne Library Parish System and the health-oriented agencies.

“The garden was one of the first projects that we did here at the library,” Callais said.

The uprooting of the Harmon Park Garden took place at the end of March. The grand re-opening of the newly farmed garden will take place on April 17, 2021 at 2 p.m. The new garden is located at the Terrebonne Parish Library Main Branch, 151 Library Drive, Houma.

“’St. Francis Vegetable Garden Master gardeners are the ones who actually did the heavy lifting and moved the boxes and did the planting. LSU AgCenter is helping by providing a lot of the resources and then together we’re going to keep it up,” Callais explained.

Cheryl Skinner, Master Gardener, piloted the movement of the garden to its freshly cultivated space. “The Harmon Park garden produced tons of vegetables that were grown and donated to food banks,” Callais stated. The previous location produced an abundance of produce that was donated to food banks, including Terrebonne Churches United Food Bank and the Good Samaritan Food Bank of Thibodaux. Generous growth and harvest of the ‘library garden’ will also serve as an endowment nursery.

Callais wants to exemplify hearty habits that are conveniently achievable. The newly placed garden will vine an attitude of health and natural activity throughout the community.

“We definitely want to encourage outdoor activity. That’s part of the goal of ‘Live Healthy Houma’. As the library, we want to provide access to healthy, safe outdoor activity,” Callais said.

The library is not just full of monotone written works, but stories of encouraged learning and biographies of life experiences. Callais wants the community to add chapters to their story where wisdom and growth are penned.

“As the library system itself one of our goals is to be a place. Libraries are not just homes with books in them. We are a place where people can come and experience things and try new things. The garden enables people to come even if they don’t have a garden at home. They can come and learn how to do these things here,” Callais said with invitation.

Classes will be offered in the Fall that teach children and adults how to maintain a garden. Thus, learning will flourish over land and community.

Recently, the library sowed a new program that florets upon the gardening culture.

“With the garden, we started a separate program called the ‘Seed Library’. We used an old card catalog and we’ve got packets of seeds in them. Patrons can come and take packets to go home and plant in their home garden. The idea is when they grow their produce, they’ll bring some seeds back,” Callais explained.

The community has collected seeds from their home gardens to donate to the ‘Seed Library’. LSU AgCenter and other local businesses have also donated seeds to help grow healthy riches. Collaborations till land and then, plant programs that produce colonial cultivation.

“A lot of what we do here at the library is try and collaborate with other community organizations to be able to put on these programs for the public,” Callais stated.

“The garden is us providing space and with the ‘Seed Library’, we have other groups that provide us with the seeds and then we’re getting them out to the public. We like to do those types of things…we like to work together,” she added.

The library has been pouring the watering can over activities that have leafed with community outreach.

“We’ve been really focusing on a lot of outdoor activities as well as activities that just try to encourage community,” Callais ended.

To be a volunteer for the community garden you can sign up at: https://www.stfrancisvegetablegarden.org/get-involved

Thibodaux’s Relay on the Road set for this Saturday