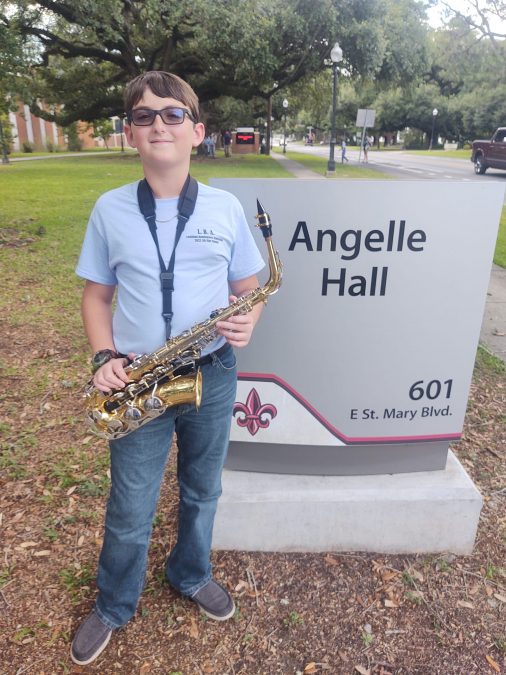 Quinn Nichols on campus at UL Lafayette for the LBA All-State Band practice.

When their son expressed interest in the band, his parents, Kenny and Stacey Nichols didn’t know what to expect. “Our oldest son played sports, but never participated in band. The band seems like such an amazing thing for Quinn. He has made so many good friends through the band and feels like a part of something really special,” his mother said.

Under the direction of band director Megan Luke, Nichols plays the alto saxophone. “The work I put in is the reward,” the student explained. “Quinn’s accomplishments make us so proud! And while his band director Mrs. Megan gives all the credit for his success to Quinn, I hear how Quinn talks about her, and I know how huge her role is too,” Stacey Nichols explained.

While the band typically begins in fourth grade with a screening to see what instrument fits the student best, Covid-19 put a wrench in these plans for Nichols. “His school at the time (Chackbay Elementary) was doing virtual learning. So no band screenings took place in fourth grade and there was no band in fifth grade,” his mother said. 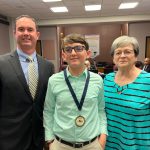 Quinn Nichols being recognized at the Lafourche Parish School Board meeting. 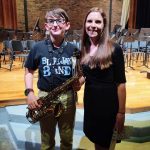 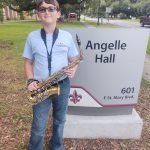 Quinn Nichols on campus at UL Lafayette for the LBA All-State Band practice.

Towards the end of fifth grade, the students were allowed to pick an instrument, and bring it to school. “Quinn randomly picked his instrument without any guidance. One of his grandmas still plays saxophone, and plays it very well, so I think that was part of why the saxophone sounded like such a good idea,” said his mother. “The students just learned a few basics before school let out.”

During Nichols first official year of band, his band director recognized his talent. “She reached out to me to talk about Quinn. I thought she was calling to fuss him for not practicing enough. She wasn’t. She recognized that he was extremely talented in music, and encouraged him to test for the Lafourche Parish Talented and Gifted Music Program,” his mother explained.

Nichol’s passion for music has led to tinkering in writing, composing and recording his own music, as well as teaching himself to play the piano. In addition, the student expresses his artistic abilities in animation. “He writes and records the music for various coding and animation projects he works on. He did the music, and frame by frame animation himself, and “hired” a few friends to help with voice acting,” she explained. View one of Quinn’s recent projects on You Tube https://youtu.be/-212DdzkWcU.

While his parents aren’t exactly sure what’s next, they are extremely proud. “Making it to this level of band in any grade is a huge honor, but making it as a first year band student, in sixth grade is amazing,” his parents said. 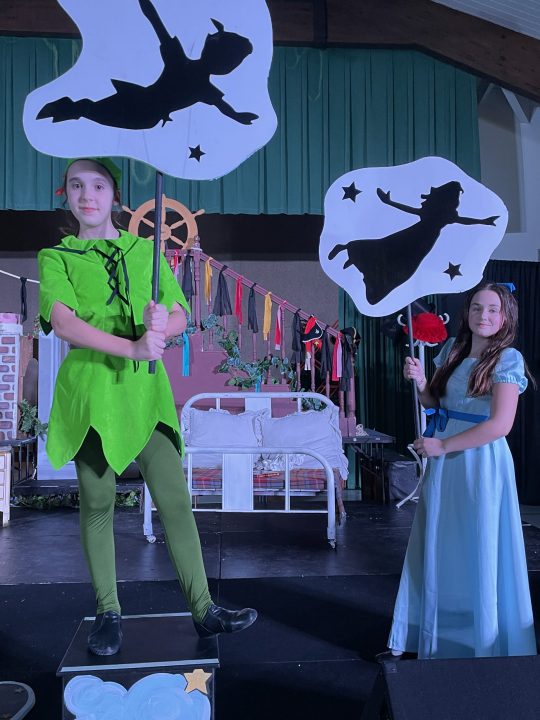