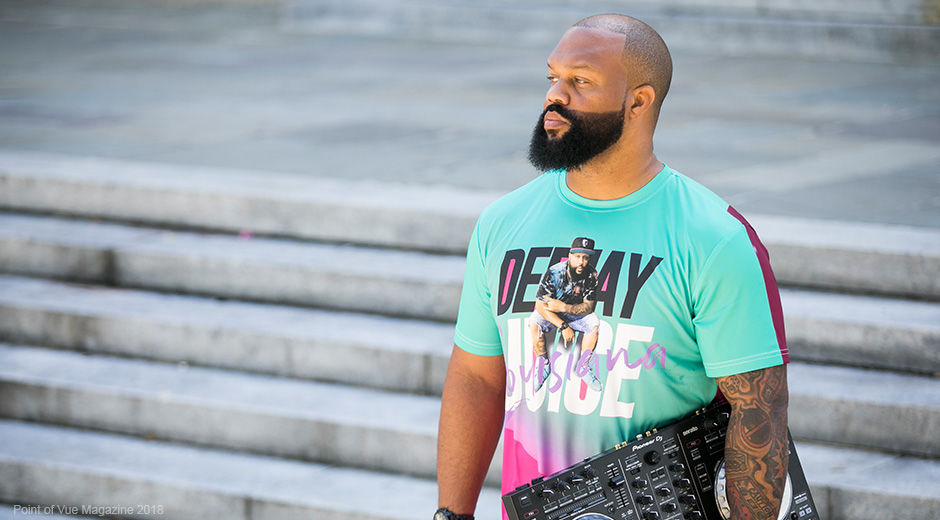 And the Beat Goes On

Contrary to how many might feel, good disc jockeys do more than just plug in a playlist and press play. They have to know songs’ details such as beats per minute (BPM) or pitch to output seamless transitions. They must understand their audience and always be alert to the energy on the dance floor. A great DJ gets the crowd moving—each person in the crowd to their own style—to one cadence. One local DJ is succeeding in making an entire community move to one beat.

Do you know DeeJay Juice?

Of course you do—or at least you should. He is a prominent DJ in the Bayou Region that is not only making a name for himself in Louisiana but also across the country. If you have not had the pleasure of enjoying one of his engaging sets from the dance floor, you might have driven through the night scene in Houma or Thibodaux and seen his name in lights above long lines of bar/club patrons, eager to enjoy the good rhythms and vibes Juice delivers.

“My philosophy is that the DJ is really like the puppet master of any situation; the DJ controls what the people are doing as far as the tempo of the party,” he explains. “Now people could come to a party with all kind of different things on their mind—positive or negative—and the DJ can just change their world within a matter of time.”

It’s not an accident that Juice has the stature to attract large crowds wherever he goes in South Louisiana. The skillful ear for music, effortless song transitions and attention to detail that go into his disc jockeying craft have been in the works since he was a young child.

“When I was younger I used to collect cassette tapes and there were these little toys that Radio Shack used to sell…It was a little toy, but if you put it together the correct way, you could actually get some kind of AM or FM signal,” Juice remembers. “So, just basically playing with that, listening to the radio all night and then being in a musical family kind of put everything together.”

Juice was born into a gifted family. His mother sings in the church choir, and his father has taught music and plays for the local band Reauxshambo. His brother is a band director at Oaklawn Junior High, and his sister sings as well.

“It’s almost like the Jackson Five, except that my parents didn’t force it upon us. It was something that we were just groomed into,” Juice says.

He started DJing as a hobby when he was about 11 years old, but the H.L. Bourgeois graduate began to take it more seriously when he started college at Southern University. Although he did a few gigs in college, it was the different people he met from various other cities and states that  he studied that were vital to his career. Juice was able to study different styles and genres that he had never been exposed to before, brought that knowledge back with him to the Bayou Region and added more skills and variety to his repertoire.

As his skills and knowledge grew, so did his popularity. The famous DJ is highly requested for parties, weddings, clubs, school dances and much more. Several locals even have rescheduled their own events just to get a day Juice wasn’t booked.

“I would possibly get another DJ; I can’t see it being that serious behind one DJ,” Juice smiles. “I guess people see something in me that they don’t see in others; so I just humbly roll with it.”

Many big names in the music industry have seen that “something” in Juice as well. He has worked with famous musical artists such as Kevin Gates, Juvenile and Lil Wayne, just to name a few.

“We toured all over the Northeast Region of the U.S. for 30 to 40,000 people, screaming to the top of their lungs,” Juice says about his 2016 tour experience with Lil Wayne.

His always-growing success and popularity have led him to perform at BET award show parties, Pelican pre-game events, various spots in Hollywood, and much, much more.

“I always give people their money’s worth,” Juice says about the key to his success. “Whenever I’m put in a position where I feel like this is something I’ve never done before, I always do my homework. I never turned anything down.”

Do you know Justin Patterson?

Once again—you should. He is a humble, thoughtful individual, who outside of being an entertainer is also a loving single father, special education teacher’s aide, coach, outstanding role model, community leader and philanthropist.

“Juice is a public person. I have to be social… I’m not stuck on myself; I just know that when I’m out in public a lot of people know me, so I’m not going to turn anybody down who wants a selfie or an autograph,” Justin shares. “But when I’m not DJing, I really rather just be with my kids and not anywhere else. If I’m not doing anything I’m either in the gym or fishing with them.

Besides always being there for his own two sons, the Gray-native continuously strives to make a positive impact on the youth in the community. He started the “Character Tour”, where he goes around to different Tri-Parish schools and puts on a dance that awards the children for good behavior. These events are motivation for the kids to do well in school while also being tremendous fundraisers for the schools themselves.

This past July in the Downtown Houma area, Justin commenced the inaugural Juice Fest—an event that he created to once again give back to the youth while also bringing the entire community together—regardless of race or culture.

“So I figured I would combine all the genres and put it in a centralized location to where a white or black person can’t say, ‘Oh, we don’t go there.’” Justin explains. “I didn’t want to make it just one-sided, so I put it downtown because downtown in any city is the place to be.”

The family-friendly free festival brought in thousands of people who got to indulge in a night full of live entertainment and delicious food from local vendors. Through the event, Justin was able accomplish many charitable acts such as donate money to local schools, give away his personally designed backpacks full of school supplies and publicly acknowledged a young fan of his that is fighting a rare liver disease.

Being a well-known role model in the community, Justin often finds himself receiving messages from local parents to talk to their child who might be going through some troubling times. He, of course, never turns them away and counts it as a “blessing”.

You can talk to local club owners, teachers, politicians or parents and be hard-pressed to find someone to say a negative word about this community influencer. Whether it’s touring around the country, performing at local venues, coaching, caring for his kids or students or creating groundbreaking events, Justin leaves a good impression by his strong character, willingness to help and leadership.

“God led me to being in that position to where I was able to have a strong voice and a strong image to where people will kind of follow my lead,” he says about his influence that motivates others. “It keeps me grounded, do the right thing and follow the path that I’m supposed to follow.” POV 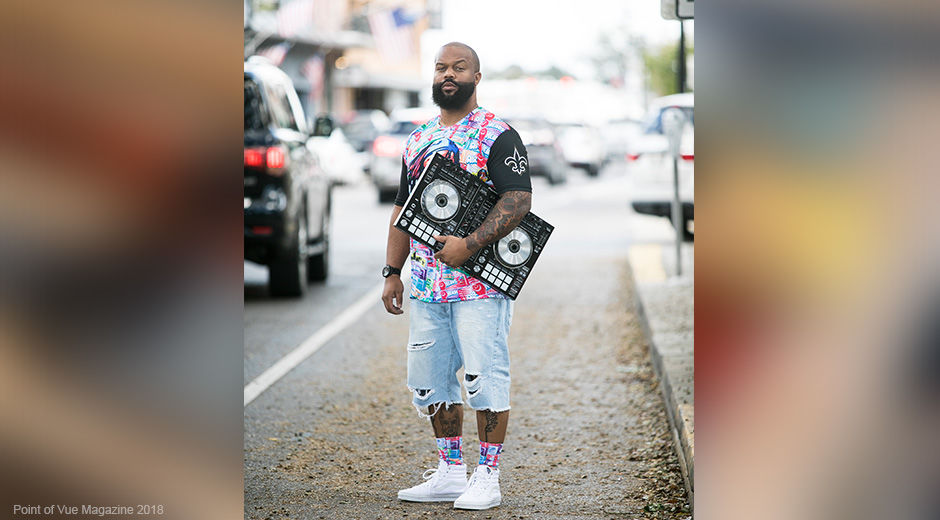 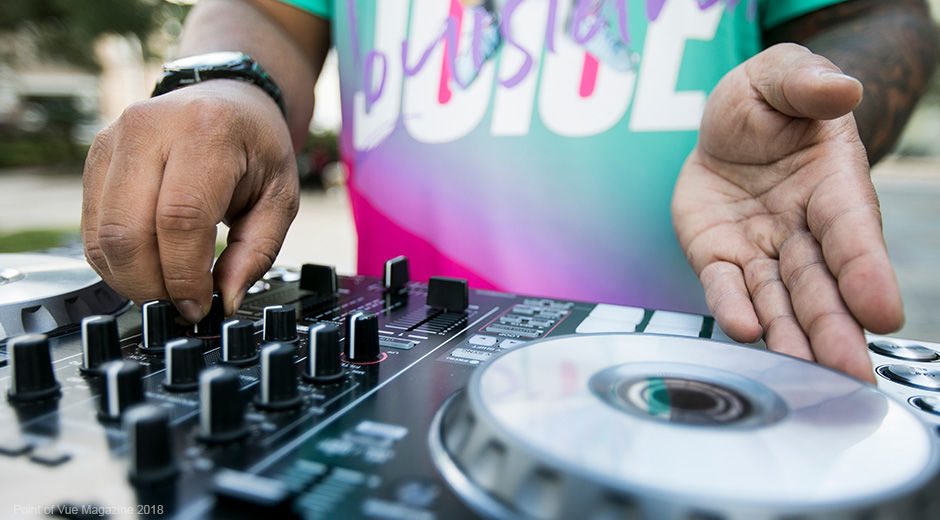 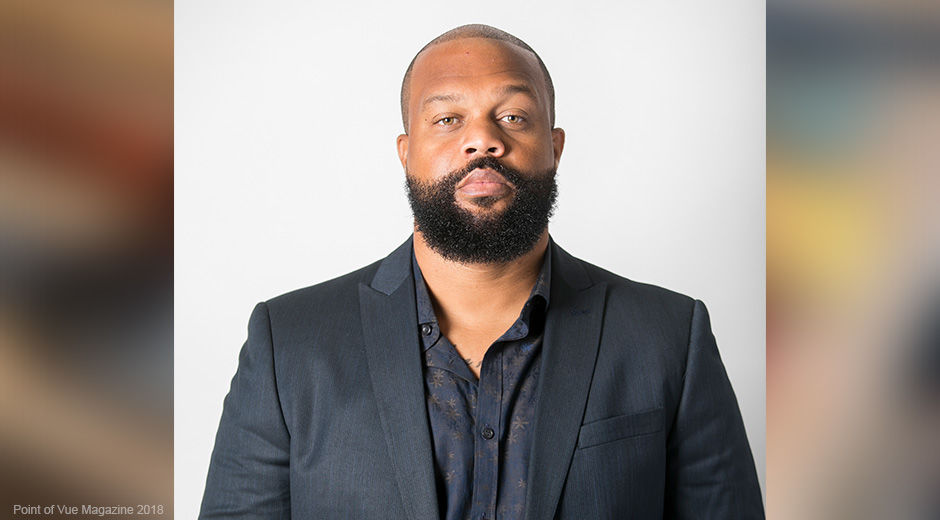