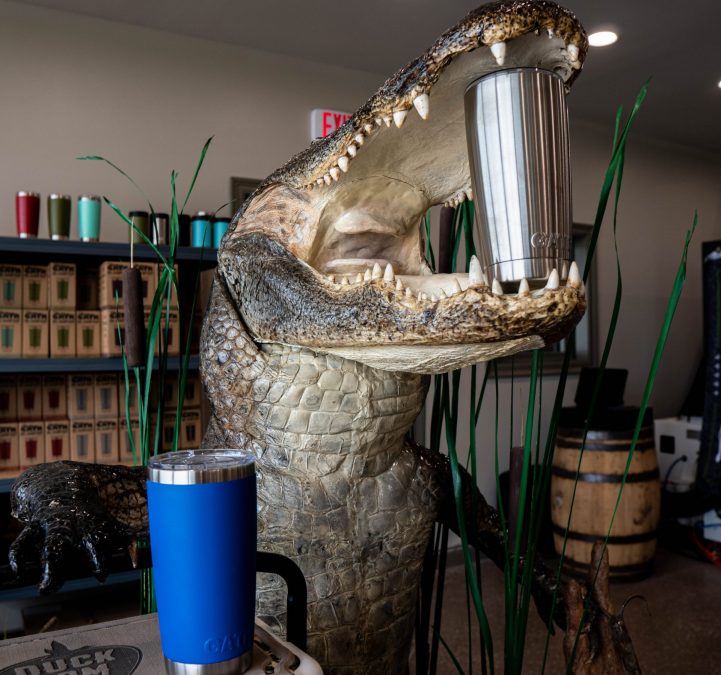 GATR Coolers — a Thibodaux-based company that specializes in custom coolers and drinkware, among other items — is a booming business, with countless orders coming in from all over the United States and overseas. It’s already reached several milestones, including racking up a million miles of shipped products, impressive considering the enterprise hasn’t even hit its 5-year mark yet.

The idea for GATR (pronounced “gator”), such as with many startups, was born out of a need. In 2016, Schriever native Mitch McGehee, who worked offshore at the time, wanted to order 10 plain “YETI-style” ice chests with no logos for him and folks on his platform. After making several calls to manufacturers overseas, he realized it would be more expensive than actual YETI coolers because he wasn’t buying enough to fill up a cargo container to ship on a vessel.

After months of pondering over the situation, he decided to move forward with the idea of ordering bulk coolers and sent a text to his brothers to see who wanted to join the new venture. His brother Bryan, who also worked in the oilfield, wanted in.

“I was trying to go the real cheap route. Bryan was more like, ‘If we’re going to do it, let’s do it right. So, let’s get a legit logo and a legit name. Let’s put a little more effort into it,” Mitch remembers.

The two established their LLC in February of 2017 and received their first shipment of coolers, about 360 of them, in May that same year. They virtually sold out in almost three weeks. “We ended up having to shut our website down ‘cause we had already booked a trade show in New Orleans. So, we had to turn our website off to bring our remaining 50, 60 coolers to the trade show — and then we sold out over there,” Mitch says.

And the business skyrocketed from there as the brothers managed it while also balancing their other day jobs and family lives. “So this was like a full-time side gig for both of us. You’re staying up till 2 or 3 o’clock in the morning and dealing with manufacturing because they’re overseas and on the opposite time schedule and then waking up at 5 or 6 in the morning to go to work and do your full-time job,” Bryan shares. “Whenever we realized that it was not just our circle that was supporting — our social media platforms were growing, and we’re getting a big following and actually building a cool brand with cool products — we started putting a little bit more money into it and a little bit more time into it.”

As orders kept pouring in and ice chests and cups began filling the rooms of their homes, they purchased a 1,500-square-foot storage space on Tiger Drive in Thibodaux, and six months later, were able to pack an additional one right next to it with products.

In April of 2020, they acquired the former Donner-Peltier Distillers building in Thibodaux to expand their inventory space and house their machinery. Because it was a distillery that’s not so well-suited for their production needs — with pandemic woes on top of that — getting their operation up and running at their new facility turned out to be an arduous process. 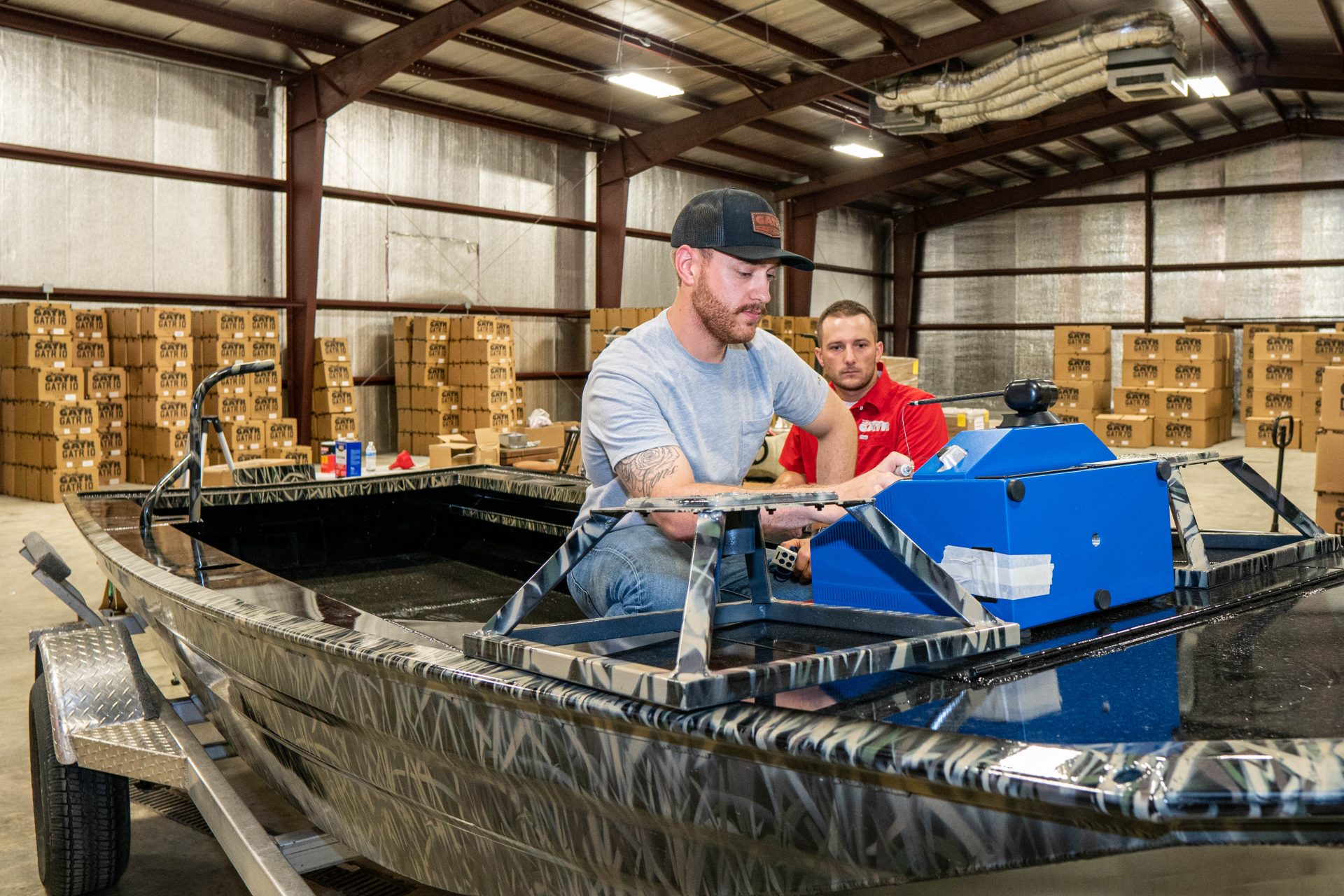 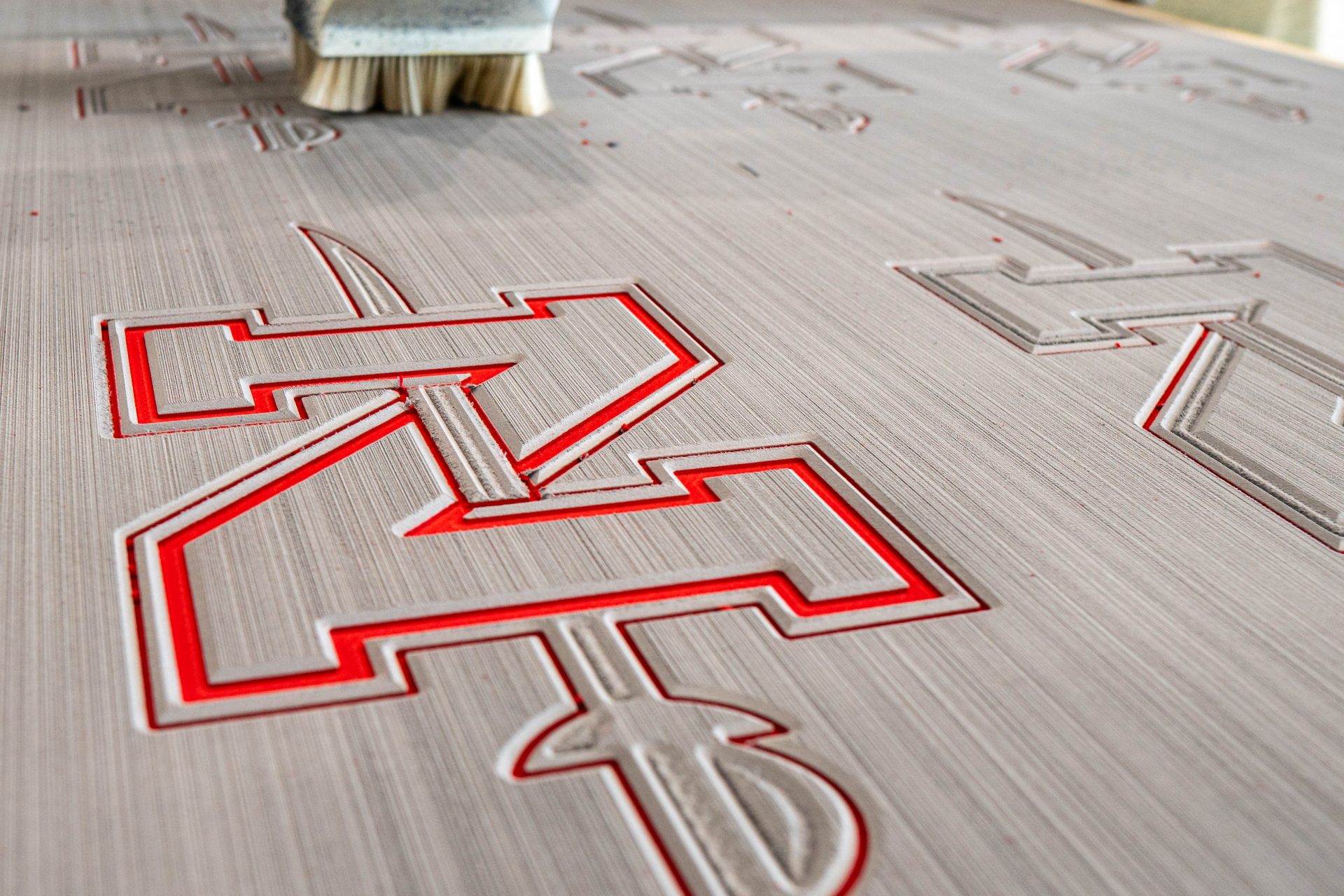 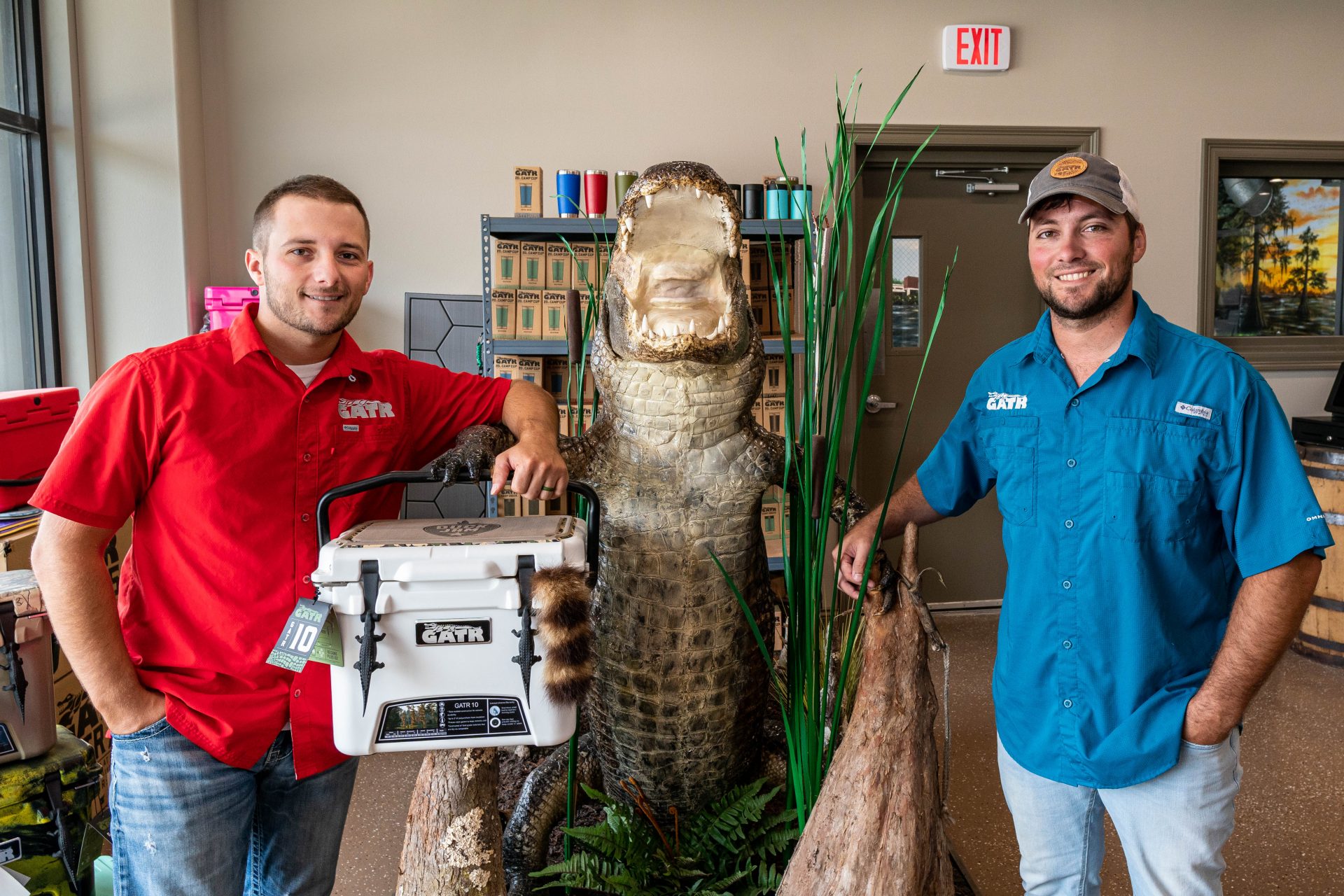 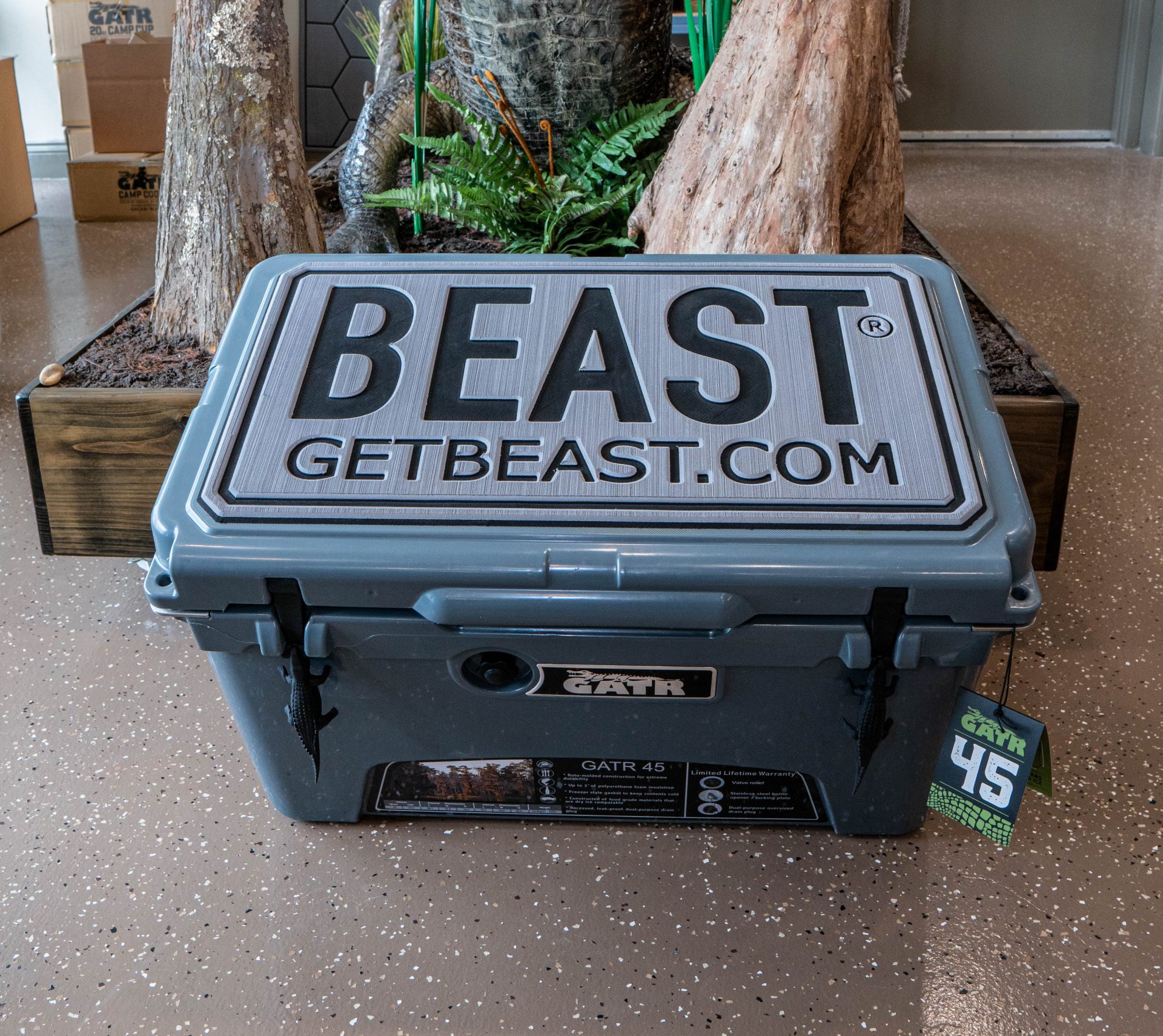 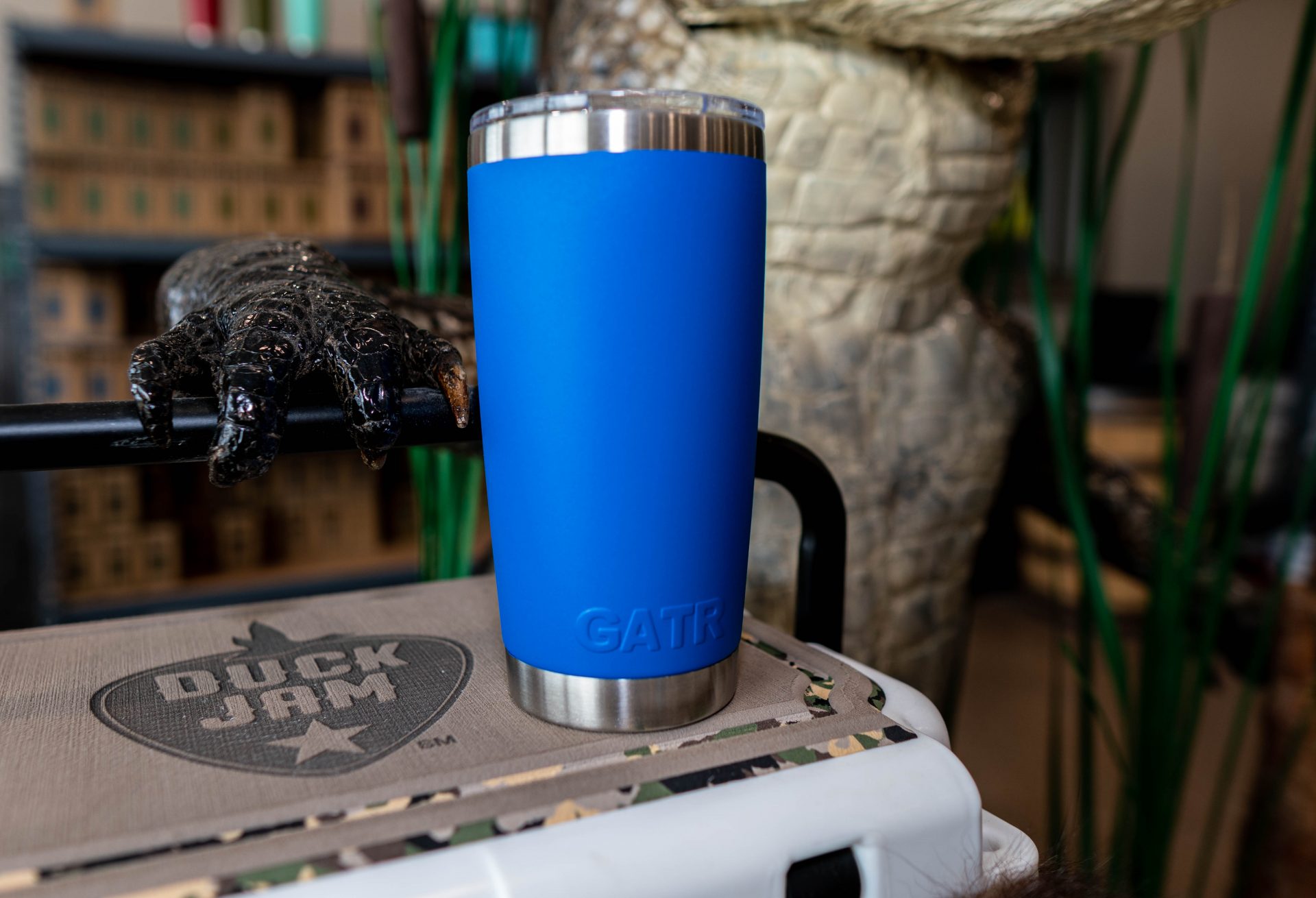 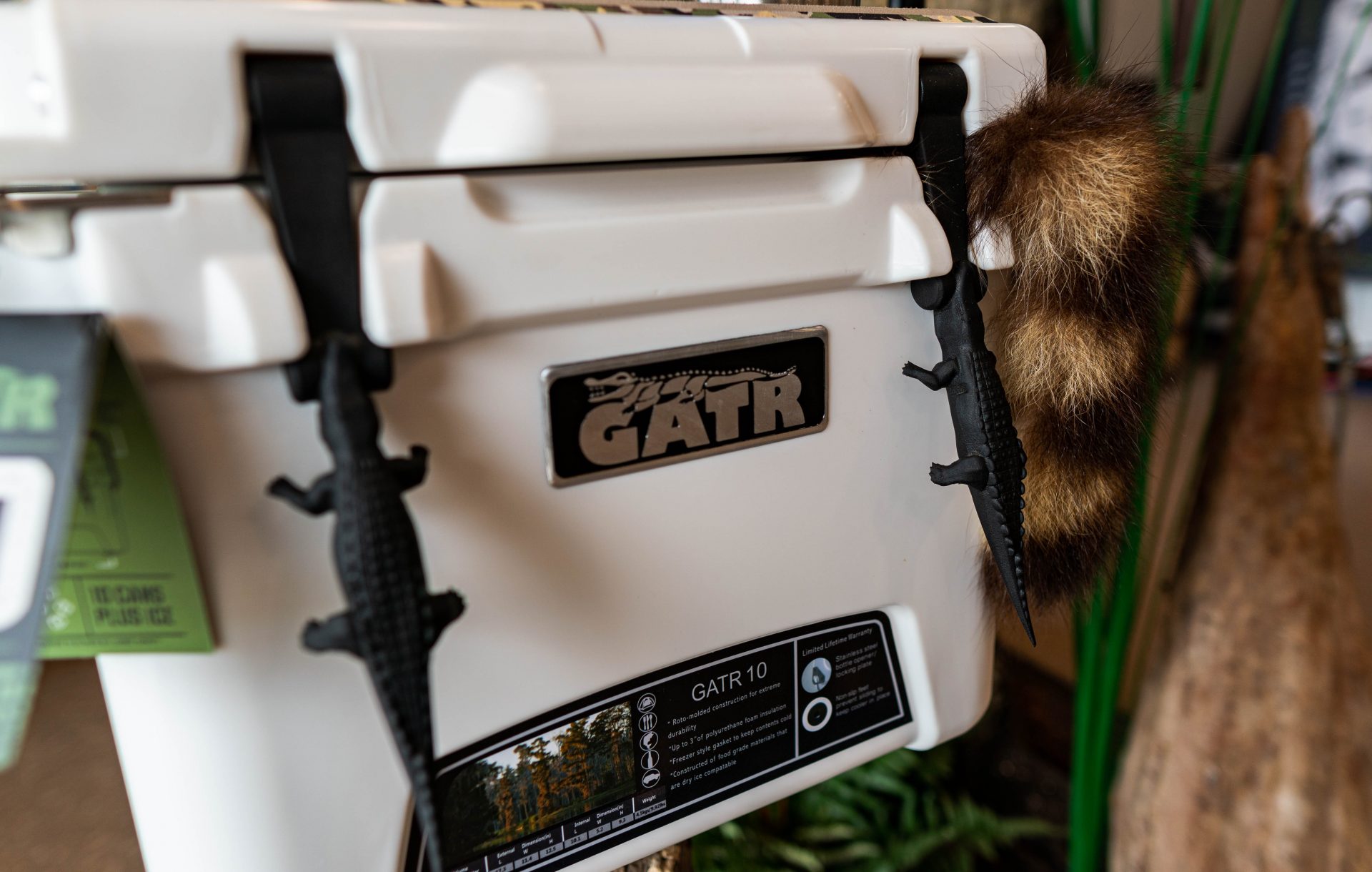 “There were some alcohol left in here, about 20-something barrels of whiskey, so we had to get that out, which took four or five months or so. That was a long process because we couldn’t get the building inspected or the bank loan or anything done until the alcohol was gone,” Bryan says. “And then, by the time we moved in, it was a couple of months worth of moving stuff out. All the equipment was left in here and super sacks of grain and rice and all this stuff in the back — a lot of stuff to clean up.”

At press time in mid-July, the GATR’s retail store at the facility was still in the works. It features a mural by local artist Hans Geist celebrating Thibodaux staples, such as Nicholls State University, Rouses and Bourgeois Meat Market, among others, nestled along the bayou. Mitch and Bryan aim to host a grand opening of the space in September — in time for gator season.

GATR offers an impressive range of high-quality products, including rotomolded coolers, cups,  koozies, apparel, accessories and more. But what really sets it apart is its customization, which it initiated a year into the business. From company logos to photos of a memorable hunting trip, customers simply can upload images for the specialists to engrave — crafting catered, unique products. “We tell people literally anything will work, and a lot of people test us with that. They send us a picture of a picture in a picture frame at an angle with glare and want that to look good on top of a cooler,” Bryan smiles.

It’s a long, meticulous process that requires special equipment. For the two brothers, however, the finished product is well worth it.

“When you think about YETI that does a billion dollars a year, they don’t have time to sit 45 minutes for one custom cooler. There’s other ways for them to get them out faster: there’s printers where you can print directly onto the cooler, there’s stickers — basically vinyl wraps. Those are both cheaper options. But for us, this is probably the most expensive way to customize a cooler, but in our opinion, the best,” Bryan explains. “These materials are designed to be outside. It doesn’t fade; it won’t peel up like a sticker. When you CNC down into the material or you laser engrave material, it’s a permanent cut or burn into the material.”

Another reason for the business’s success is the McGehees’ social media engagement. GATR’s Instagram and Facebook accounts, with a combined nearly 100,000 followers, are plastered with customer-created content. “There’s no new science behind plastic and insulation; it’s about the brand that you’re building. And it’s about you involving your customers — involving the people that supported you. So, it’s not something as simple as just posting photo shoot stuff on our social media,” Bryan says. “…We post and tag them on there and let them know the brand is supporting them, too.”

To see what GATR Coolers, which is branching out into boat customization, dry boxes and duffel bags, among other products and services, has in store, visit gatrcoolers.com.