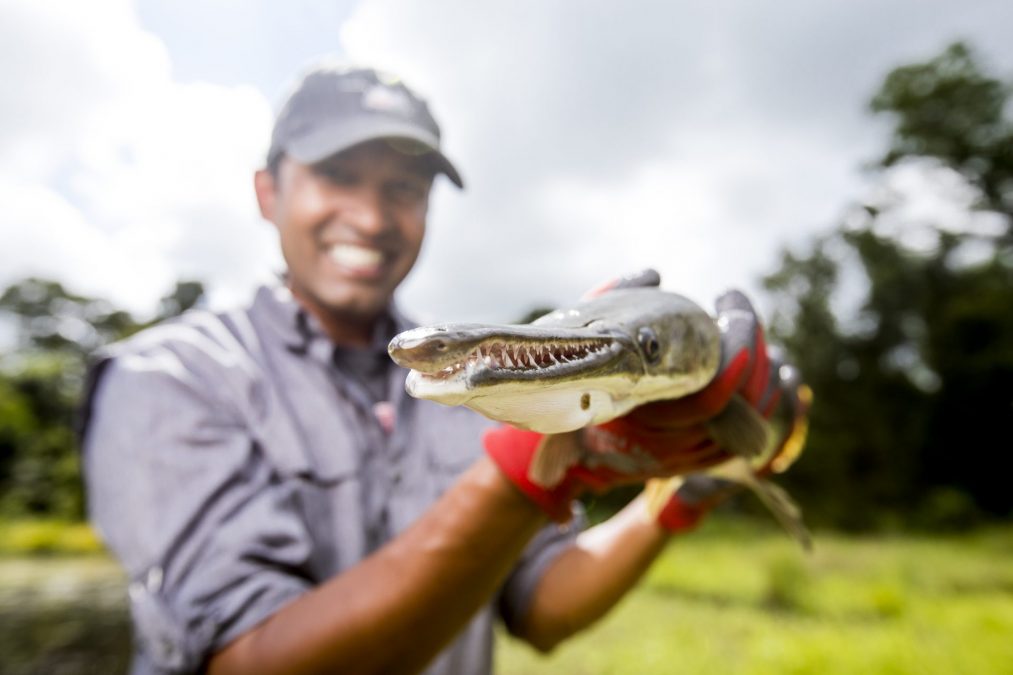 Louisiana waters are as diverse as the culture and the wetlands breathe beauty like the people. The state is called Sportsman’s Paradise for a reason; there’s simply nowhere like it and it is a melting pot of wildlife.

Dr. Solomon David is an Assistant Professor in the Biology Department at Nicholls State University and he is known as the “gar man.” He really likes gar. Although the fish gets a bad reputation, even called “trash fish,” Solomon brings fresh life to the species through his studies. His interest in science and all things ‘crawly’ began when he was a child. He grew up in Ohio where he said his parents and grandparents fostered his love for nature; he was absolutely that kid who would be in the ditch rummaging for the “less cuddly” critters. His favorite creatures were dinosaurs and turtles. Gar entered his life while flipping through a ‘Ranger Rick’ magazine. It was initially turtles in an illustration that caught his eye, however, the main focus of the drawing was a prehistoric fish with big jaws and a slew of teeth that immediately hooked him in. The story was titled ‘Mississippi King’ and it featured the unique alligator gar. The family of gar has been around for over 150 million years, which was during the late Jurassic period. That makes them older than the Tyrannosaurus rex which was Solomon’s favorite dinosaur as a kid. He said, “they swam before the dinosaurs, outlasted the dinosaurs, and still look the same.”  This is why he knew since that Ranger Rick story he wanted to grow up to be in the science field; a childhood interest led to his fascinating career.

Solomon went on to study at Ohio Northern University for his undergraduate degree. He later earned a master’s degree and Ph.D. at the University of Michigan. During graduate school, the National Oceanic and Atmospheric Administration (NOOA) Lab had extra room in a building and told Solomon he could study in it which became known as the Gar Lab.  It was also during his studies in Michigan that he connected with Dr. Allyse Ferrara and Dr. Quenton Fontenot from Nicholls State University in Thibodaux who helped him understand the most current research and projects. They later met for the first time at a conference in Costa Rica and went on to visit the Nicholls campus in 2009. Fast forward to 2017, where Dr. Fontenot made a point to let Solomon know a position at Nicholls State was becoming vacant soon due to the retirement of a professor and Solomon went all in. The Gar Lab name also migrated south with him.

The main focus of the Gar Lab is, you guessed it, gar (Lepisosteidae). Although the lab doesn’t only study gar, they use the fish family to answer other questions that are based on biology, ecology, conservation, and reservation. The professor and the graduate students in the Gar Lab have also bred the fish to gain a better supply of gar and its embryos. The embryos are then sent to Michigan to help with studies. Although the fish is abundant in the south, they are less prevalent in the north due to them preferring warmer slow-moving waters. This, along with people exterminating the fish when caught because they see them as a predatory species and habitat loss, has caused extinction in some areas. Solomon said there are efforts put in place to help the areas that see extinction and they are starting to see gar in areas that haven’t seen the fish in decades.

Solomon said one of the best aspects of being a professor is to work with students that are primarily from the region and being able to teach them not only about biology, but also things such as different ecosystems with genuine excitement that is infectious. He said he first-hand gets to see the excitement pass to his students about their studies. There is a difference between his undergraduate and graduate students, Solomon said, and interestingly the graduate program brings in students from all over the country. The students come from all different cultures and get to see first-hand the beauty of Louisiana culture that includes a variety of species that are in no other area. 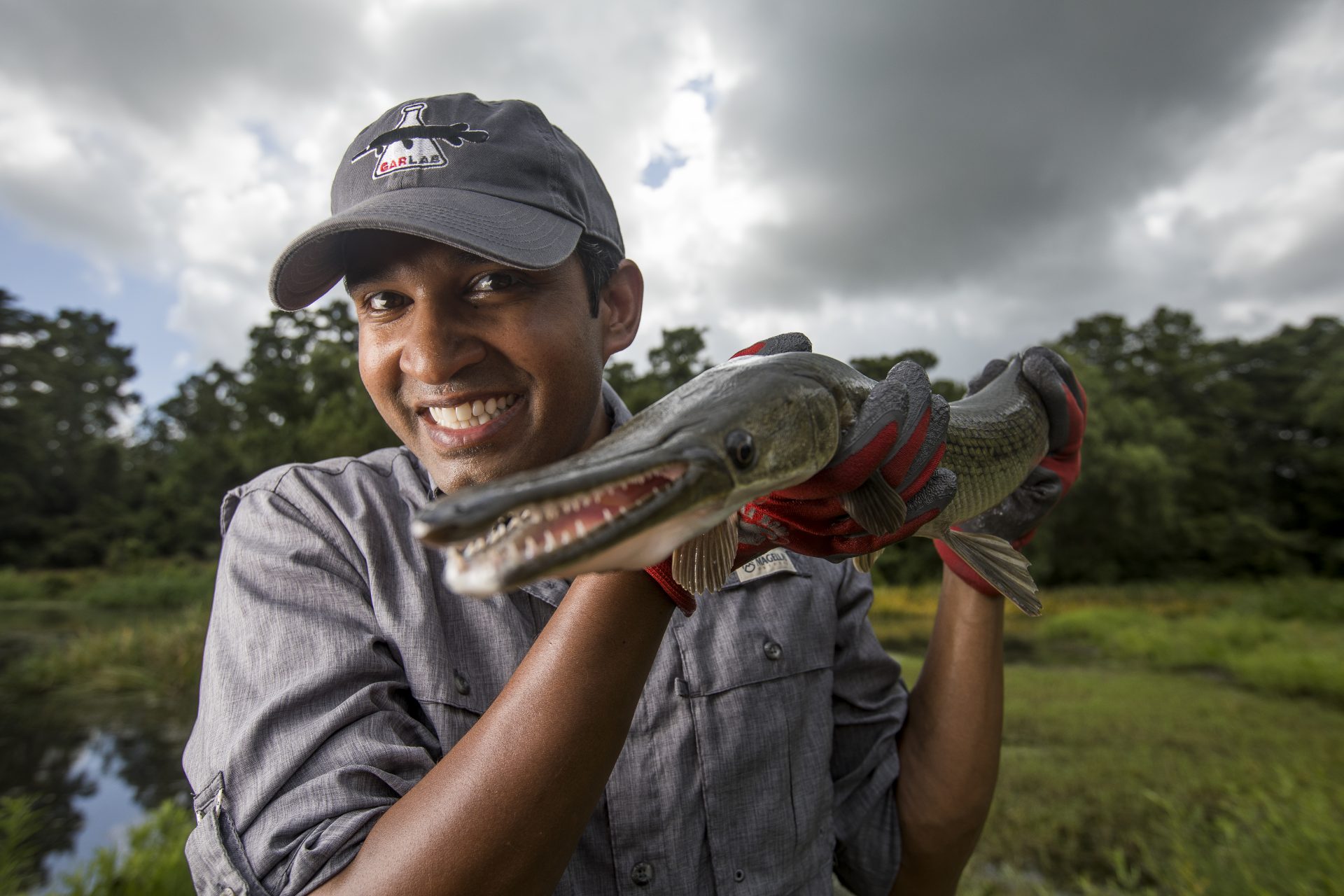 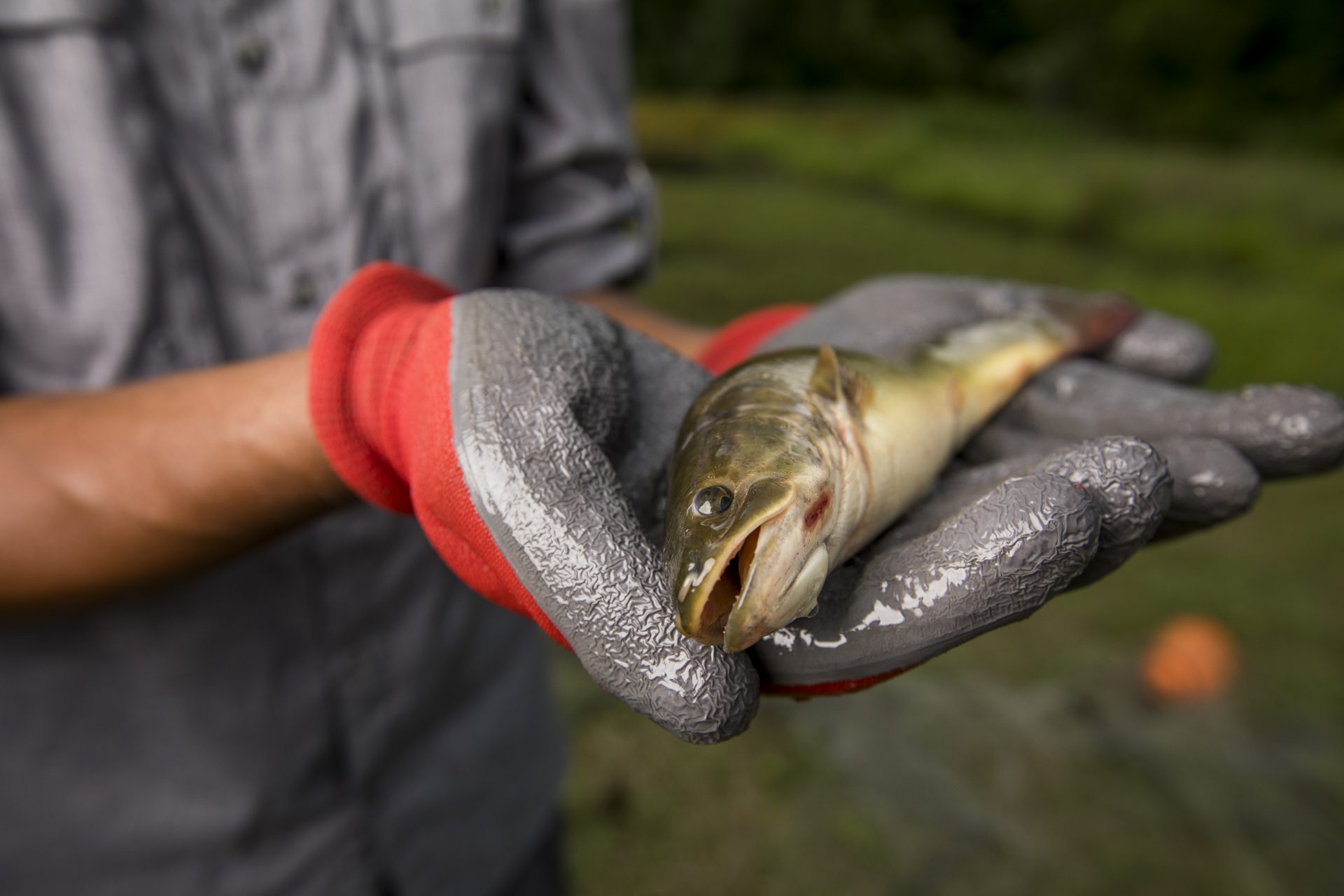 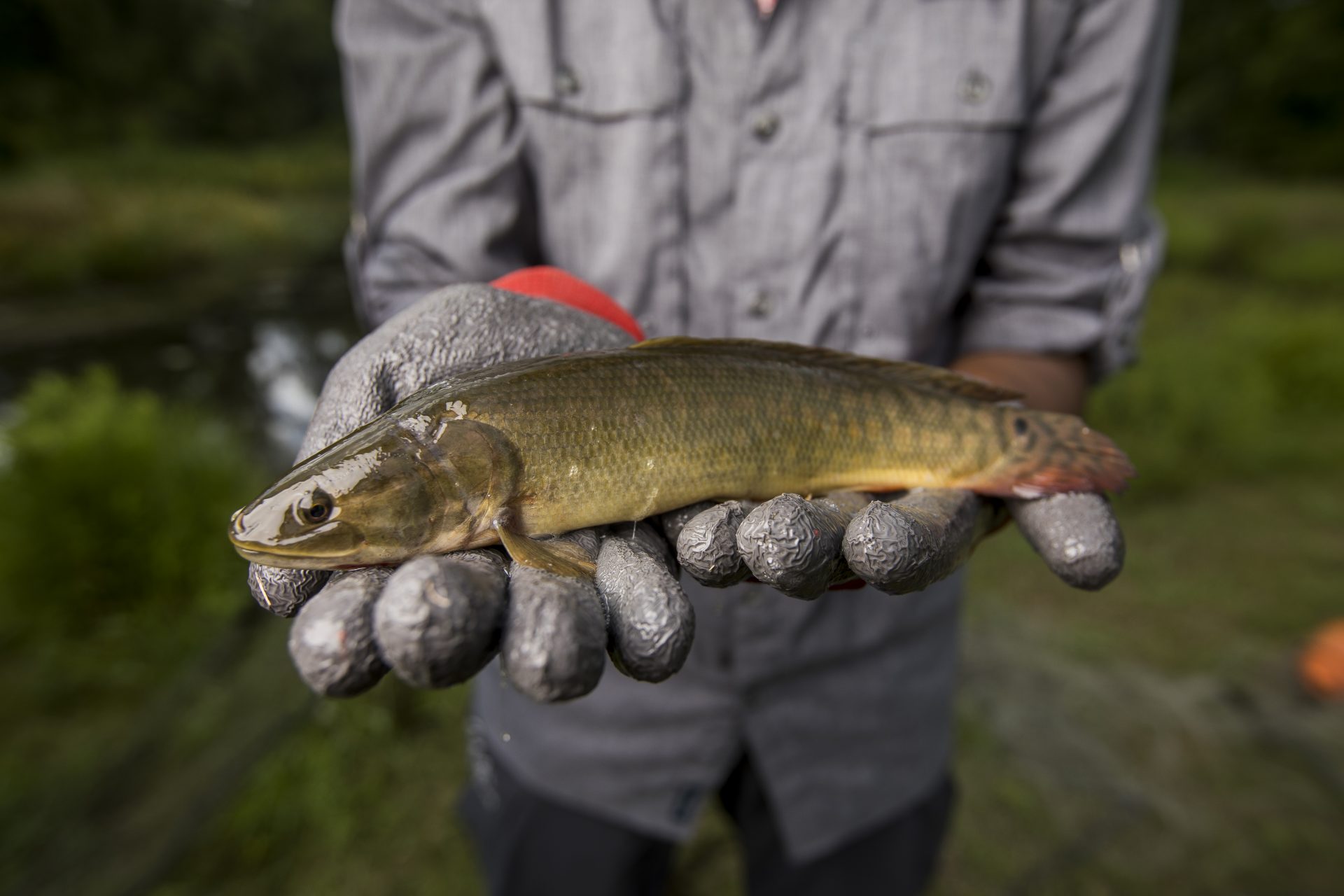 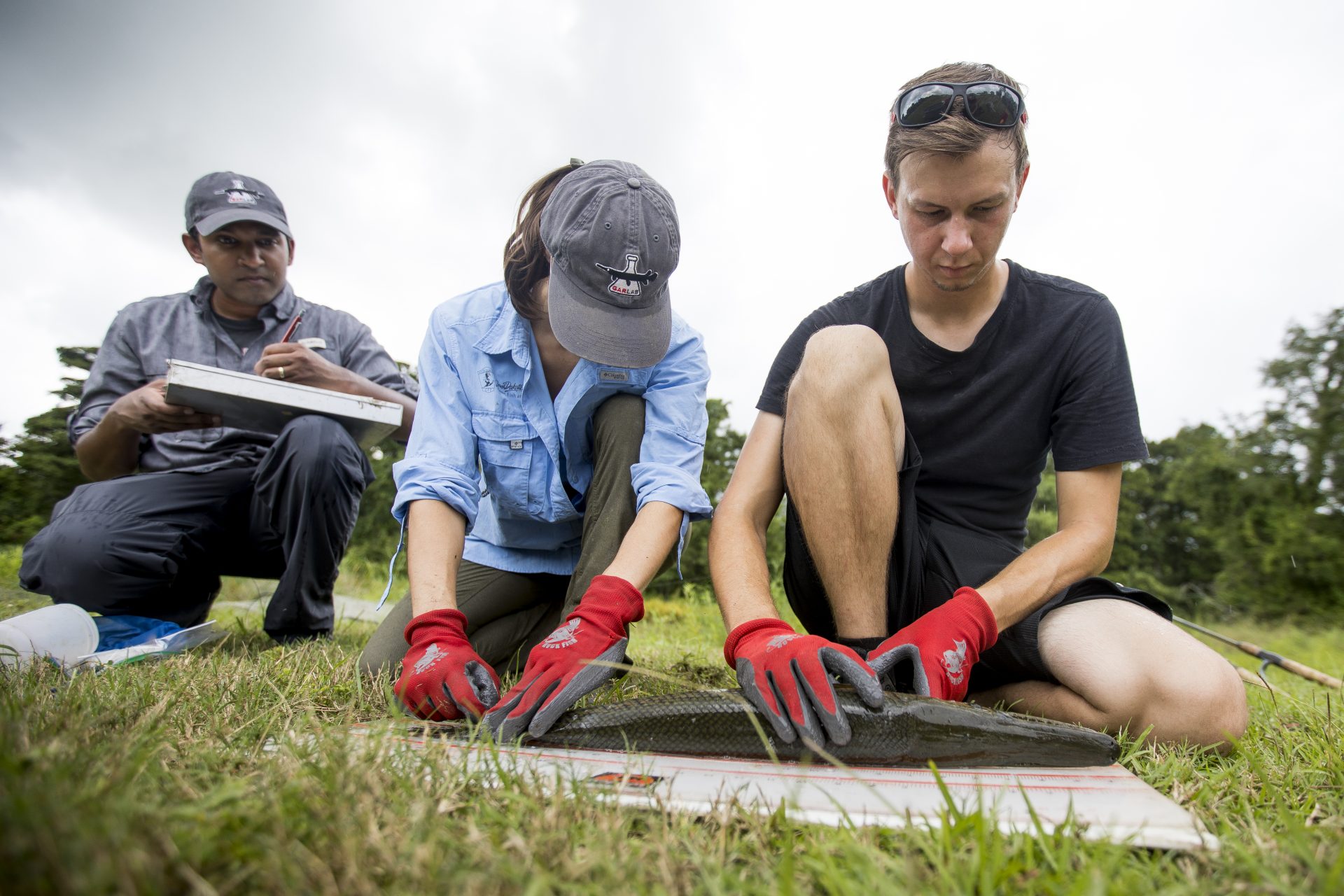 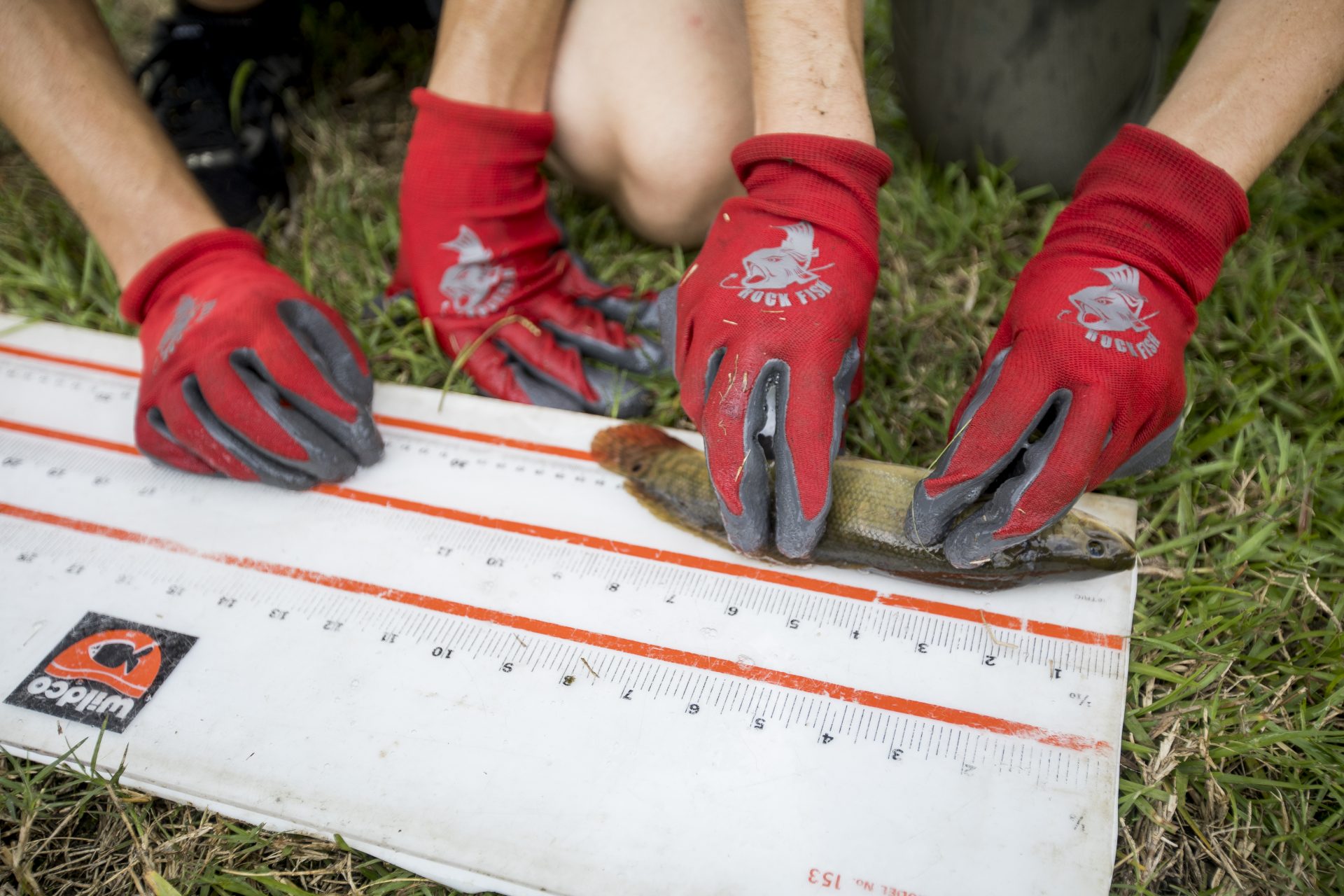 Solomon, or master of the #GarPun, spewed many interesting facts: gar has an armored hide where it’s as thick as enamel, they have poisonous eggs, the lifespan of a gar can be over 100 years old, alligator gar can get up to a “GARgantuan” size of over six feet long and can weigh more than 200 pounds, gar breathe air through special air sacs, there are 7 species of the fish family (5 of which are in the United States), they are living fossils that evolve at a much slower rate than other organisms, and spotted gar are genetically closer to humans than other fish species. The last fact is especially important because it could potentially lead to advancements in biomedical research focused on human diseases.

“That’s a big part of what I do at the university and on social media is talking about the value of the organisms and how they fit in the bigger picture of biodiversity,“ Solomon said, “We live alongside these organisms and they can do stuff for us too. They can tell us the health of the environment and their genomes can be important to us when working on studying the evolution of diseases.”

Solomon said the most challenging part of his study efforts is accessing already limited resources. He said, “when studying the environment, you have to look at ecology and biology which is conservation of biodiversity, so conserving nature and its world around it. Resources are always going to be the most challenging part.” He said because gar is the ‘underdog’ of fish, the limited amount of resources are more likely to go to other efforts. He said the results of gar research are very important because it can help with a great deal for the area such as conservation such as what the fish tell the health of the environment, ethics of genetics to help with human diseases, and more. Although they have a long history with a bad reputation, the fish have a hopeful future of repopulating, helping biodiversity, and biomedicine that is ‘GAR-anteed’ to push the species to thrive for another 150 million years.