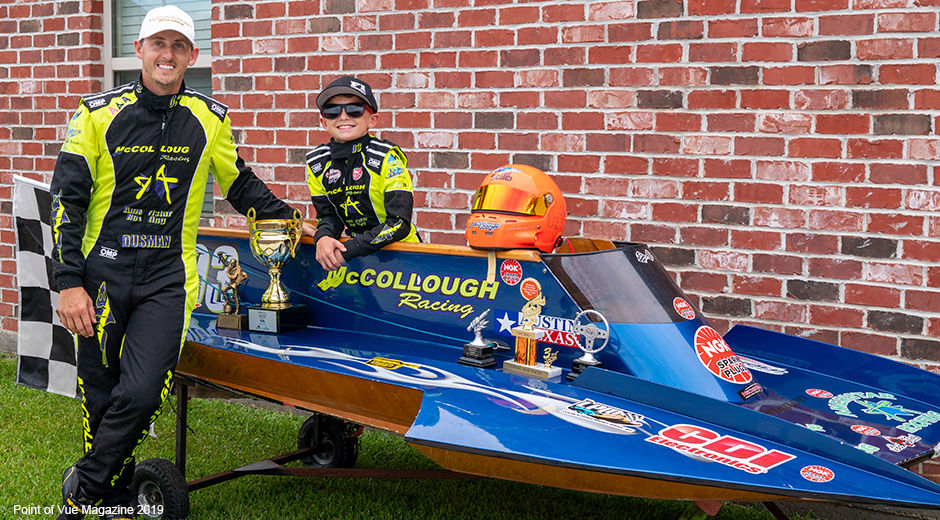 We celebrate the famous father-son athletes in America such as Dale Earnhardt Sr. and Jr., Dell and Steph Curry, Ken Griffey Sr. and Jr. and the Mannings. Not only does the talent they display attract us but also that special bond they have.

Locally, the father-son team of Dustin and Austin Terry are making waves for themselves on the national level in the sport of powerboat racing. Through their wins, losses, crashes, injuries, special family bond and unwavering dedication to the sport, the talented duo give people in the Houma-Thibodaux area another sports family to root for.

Fourteen years ago, at the age of 19, Dustin – like his son – followed in the footsteps of his father who also raced. Austin, however, started significantly younger than his father in the sport. Soon to turn 9 years old, he already has two seasons under his belt.

The two compete in different fields, which both use unique types of boats.

For Dustin, he races in a Formula One (F1) tunnel boat, similar to an F1 car. The outboard boat is made out of carbon fiber. Enclosed in a capsule, he steers the boat from inside the safety cell while being strapped into a six-point harness. The F1 tunnel boats go from 0-100 mph in approximately four seconds, with a top speed of just over 120 mph.

“I think it’s a pretty unique sport. I saw it at a young age and really loved it. It was more appealing to me than anything else I’ve ever seen,” Dustin remembers. “So, getting into it was a lifelong dream. I think what’s cool about it is that it’s on the water; it’s just kind of a different form of racing.”

Austin steers his J-Hydro boat while kneeling and controls the throttle with his hands, which he laughs off as “pretty painful.” Not in a safety capsule, he uses the weight of his body to control the balance of his boat – which has a top speed of 45 mph.

Austin says the competitiveness of the races and not having to deal with car traffic are what he enjoys most about the sport.

Although relatively small compared to major sport leagues, the NGK F1 Powerboat Championship league – which is televised on CBS Sports – that Dustin and Austin mainly race in is extremely competitive. For an NGK event, Dustin participates in a weekend full of qualifying races that lead up to a final race that has over 20 boats competing for the No.1 spot. Austin, being one of the youngest – if not the youngest – in his age group, competes against kids as old as 14.

The McCollough Racing team members embrace those challenges, however, and acquired several successes in their career. Dustin has won NGK F1 races and smaller championships in different classes. Austin has won a qualifying race and has reached third-place podium finishes for two weekend events.

Even though the sport comes with its many enjoyable moments, the family has had more than their fair share of scares during races.

Dustin has crashed over 20 times, with his worst injuries coming from a crash last year during a race in Gulfport, Fla. While going approximately 100 mph, his boat jumped a wave and then plunged head first into the water. Upon impact, the canopy of his boat and the windshield of his helmet collapsed.

Earlier this year, Austin’s throttle got stuck on a boat he was driving which caused him to jump the dock “like James Bond”, he describes. Fortunately, Austin, who races in a Kevlar suit, only had some minor damage to his leg. He says he wasn’t scared during the crash.

“We were more scared as parents than he was,” Dustin shares.

The boat and equipment used, Dustin explains, are designed to keep the driver safe. Safety is always the main priority for the family.

Embracing that the sport sometimes comes with scary moments, the two still aim to achieve their ultimate goals. Dustin strives to win an NGK overall championship series. Austin wants to be the best and eventually compete against his father.

Not only does their dedication to the sport helps them to accomplish new feats in powerboat racing, but also their great support system – the Terry family.

“I’ve got a great wife [Katy] that allows us to do this type of stuff,” Dustin says. “That’s a big challenge, too. She’s got to pull some of the slack here at the house, or she’s got to get on the road with all three of our kids to bring them to a race. Whenever we’re at a race, she’s the one putting his [Austin’s] boat into the water because I’ll be at my boat in the water at the same time.”

Dustin’s oldest daughter, Adrienne, enjoys working on the boats’ motors, and he says he’s sure his youngest daughter, Annabelle, will get into it at some point. Dustin’s sister, Whittney Terry Fletcher, races as well.

The family tries to make a mini vacation out of all the places the races are held, which brings them to states across the county. Nevertheless, Dustin wishes to see an NGK F1 powerboat race be held in Louisiana again. 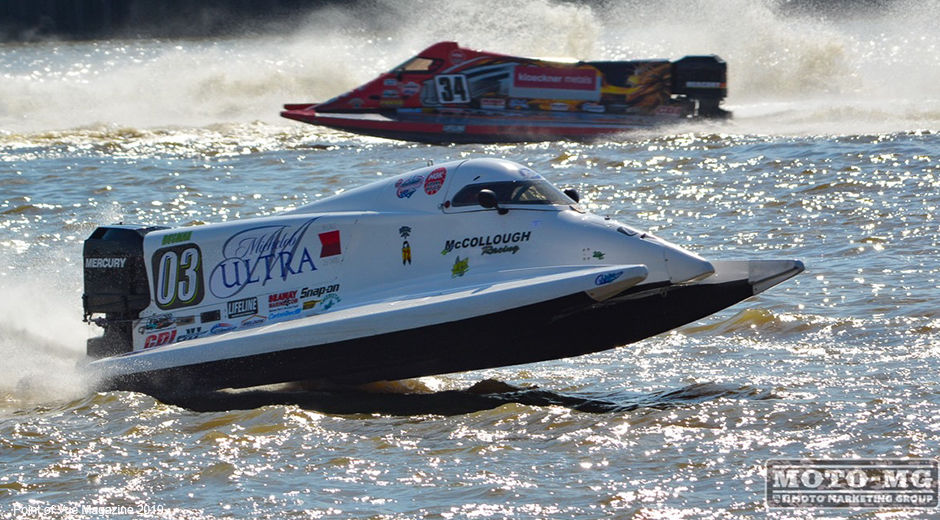 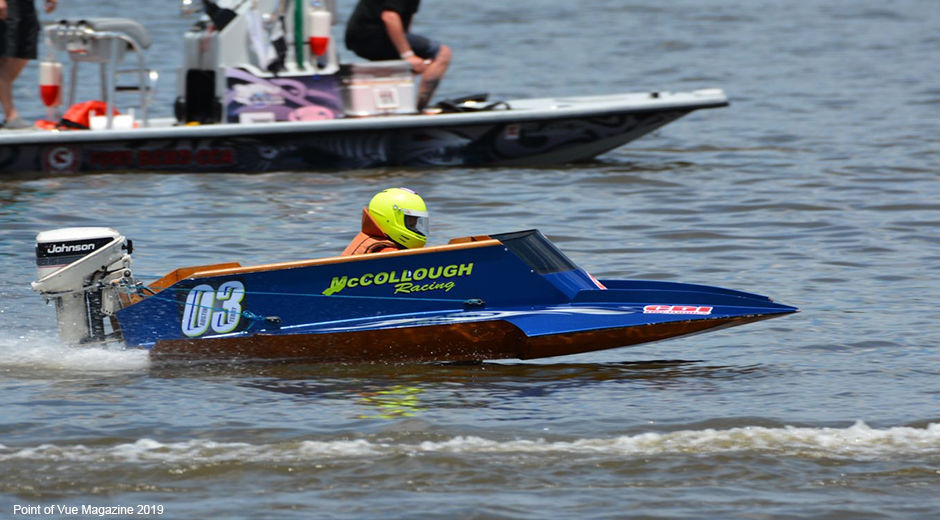 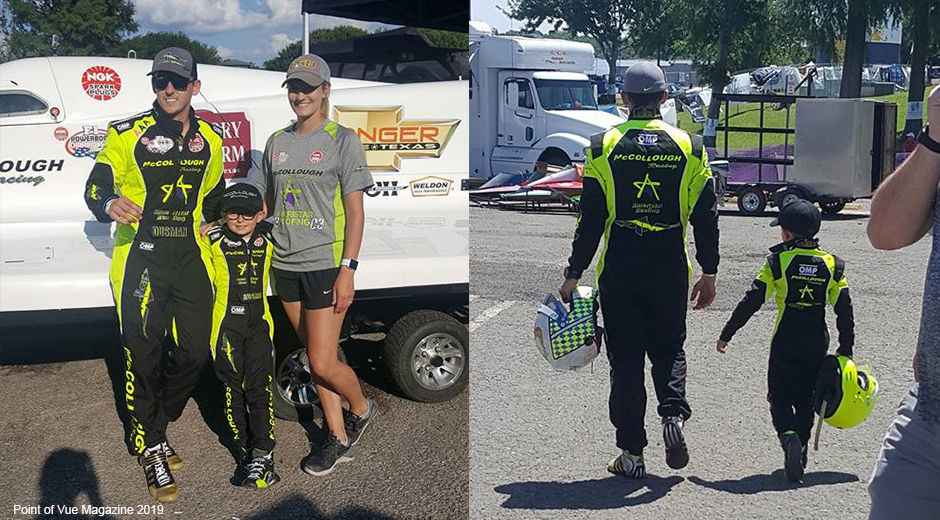 Photos by Drew Miller and submitted