Just You & The Glass 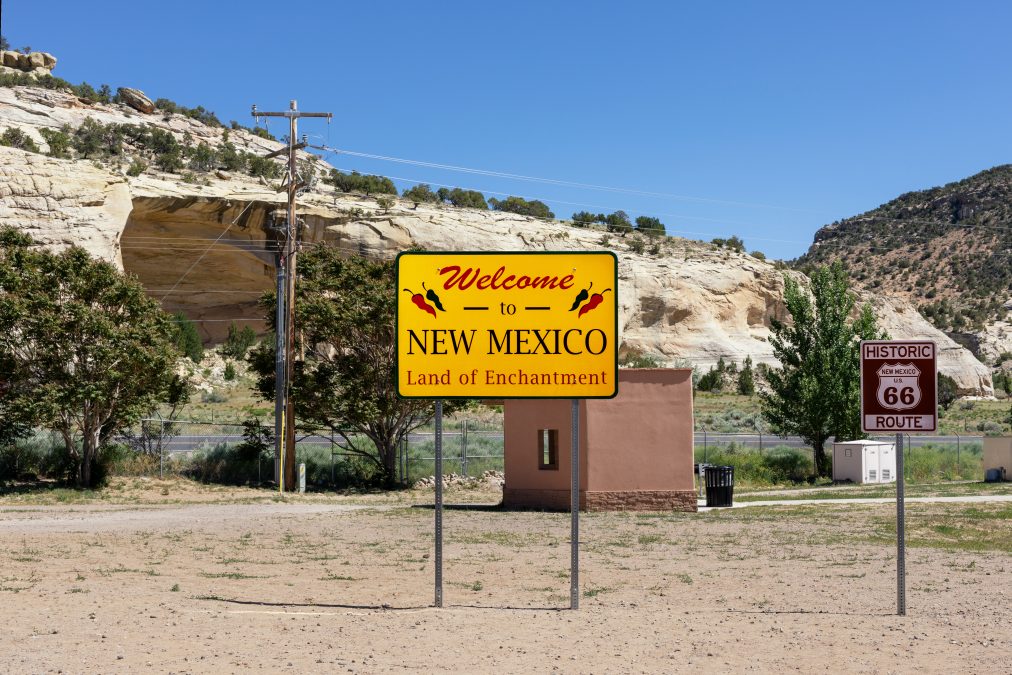 Welcome to New Mexico sign along the highway at the state border.

I’m writing from Albuquerque, New Mexico.  Yes, I know what you’re thinking:  Why in the world would I leave the comfort of PoV country, with its daily 90- to 100-degree heat indexes, to travel out west and visit a desert?  Maybe it was the promise of lower humidity.  Maybe I was tired of Burger King breakfast burritos and longed for one from the place that invented them.  Maybe it was just the querque name of the city.  Or maybe it’s because Bugs Bunny was here.

Yes, Albuquerque lies in a desert–not the more famous Sonoran or Mohave Deserts but rather the Chihuahuan Desert.  Yes, I know what you’re thinking:  The place is overcome with a million little short-legged canines barking nonstop and running around the streets like poster dogs for an SPCA spay-and-neutering program.  Well, you would be thinking wrong.  It’s not much of a desert after all.  In fact, nights are quite cool and breezy—so nice and comfortable that advertisements for local realtors pop-up on your iPhone at night.  They’re gone by the next noon.

Albuquerque is 5314 feet above sea level, and the desert air is considerably thinner and drier than we bayou folk are accustomed to.  And so is the bacon at the hotel’s complimentary breakfast.  If you think Louisiana thin-fried catfish is a marvel of meat carving, you should see these transparent slices of pork.  You can actually read tourism brochures through the fatty slats between slivers of muscle.  Since your hands are parched and peeling from the dry climate, you must always be careful handling this bacon to avoid cuticle cuts.  Try using gloves.  Or a fork.

Speaking of cooking things, the television series “Breaking Bad” was filmed here.  It’s something the small businesses in the Old Town make market of, selling black t-shirts with images of the show’s star, Brian Cranston.  There’s even a Breaking Bad tour, and the tour bus is decorated like Cranston’s motorhome lab.  I did not attempt to go on this tour, by the way.

Bugs Bunny’s travel dilemma at Albuquerque derives from the history of the U.S. Highway system.  Some readers may remember the 1946 Nat King Cole hit that went “Won’t you get hip to this timely tip / When you make that California trip / Get your kicks on Route 66.”  Apparently, the stretch of Route 66 west through Albuquerque was added in the 1930s, a decade or so after the Route had already been paved down the center of the city, suddenly giving drivers two choices after many years.  And since the new stretch was only a slight turn off of the older stretch, drivers were confused and frequently took the wrong exit.  It became a long-running problem for tourists as well one burrowing rabbit, who made it a national punchline.

And, since I have you humming famous American songs from 1946, here’s another one relevant to Albuquerque’s history.  This one’s an Oscar winner for Johnny Mercer: “Do ya hear that whistle down the line? / I figure that it’s engine 49 / She’s the only one that’ll sound that way / On the Atchison, Topeka, and the Santa Fe.”  The Santa Fe Railway crossed Albuquerque in the 1880s, bringing lumber, glass, and commercial plaster to the city’s hungry construction industry.  And that musta been a whole lot of plaster over the ensuing century of railway service, because the outsides of thousands of buildings and homes are smooth-edged, adobe-style terracotta.

Albuquerque has lots of rocks.  Where we have marsh clam shells, they have rocks.  When building, you use what local materials you can find.  After all, this city lies beneath mountains, and we lie atop a marsh.  Those mountains, by the way, are the Sandia Mountains, which have the stunningly beautiful trick of glowing pink in the sunset due to feldspar crystals embedded in their granite peaks.  Our marsh clams also glow pink, but that’s when they’re in love.

The peak of Sandi Mountain, which stands 10,378 feet above sea level, is reached by the longest tramway in the U.S.  Once up there, you’ll experience lots of rocks and chipmunks, miles of mountain and forest trails, and breathtaking views of the valley—breathtaking because there’s 18% less oxygen and 30 fewer degrees Fahrenheit up there.  Interestingly, they sell one-way tickets.  Yes, I know what you’re thinking:  You may not hear from me next month.

Albuquerque is a city where “red or green” is a less important question for traffic intersections than it is for waiters offering you chile peppers.  And speaking of bipeds and plant foods, there are no carrot-chewing, wisecracking rabbits walking upright here, much to my disappointment.  However, there are certainly roadrunners scurrying around that “never bother anyone / Just running down the road with the idea of having fun.”