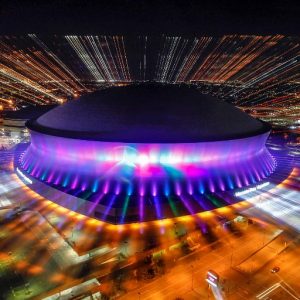 Kirk (recording): Captain’s Log, Stardate 3194.01. We remain on Earth, about one millennium in the past, investigating an unusual space-time distortion discovered by First Officer Spock. It is now seven Earth days since losing contact with the Enterprise…

[The Enterprise Bridge, festively decorated, as is the crew]

Scotty (singing, conducting others with a glass in hand): …Should auld ac-quaint-tance—Come on, people! It’s Scottish! Put yer heart into it!—(slurring) We twa hae run about the braes, and pu’d the gowans fine…

Kirk (recording): I have dispatched the landing party across the near vicinity in search of the distortion’s source.

Uhura (recording): Surrounded by crowds of anthropoids—multicolored, bejeweled, dancing. Neither Klingon nor Romulan. A diversity of species and unusual behaviors not in our records.

Spock (staring at a float’s large figurehead of himself): Fascinating.

Bones (handcuffed wrists atop a table): How many times do I have I say it? It’s not a gun—it’s a phaser! And I’m a doctor!

Spock: Captain, it appears that the space-time distortion is all around us—and across this planet. Major human activities that consume time have been largely suspended by the viral pandemic.

Kirk: Understood, Mr. Spock. That’s why we’re sitting outside. I had asked for the Chef’s room.

Uhura: A lost episode in Earth history. Captain, what can we do to help?

Spock: We cannot help, lieutenant. We cannot alter Earth history. “Helping” would change the shape of space-time and thus the course of all future. Altering history will create a new future that may not include us or the Enterprise. We cannot contribute to this past civilization—not one new word, not one new sound.

[A waiter appears, offering a tray of three cocktail drinks]

Waiter: Excuse me, sirs, ma’am. Compliments of that that socially-distanced gentleman sitting inside at the bar wearing the form-fitting blue top with black slacks and shiny black boots.

[From inside the bar, Bones raises his glass.]

Bones: Well, just a little bartering, that’s all. (showing his Tricorder) I searched Earth history and found instructions for a vaccine against this age’s virus. “A formula for my freedom,” I said. Those white-coats took the bait, and they let me go. Kept my phaser, though.

Spock: Dr. McCoy, by providing that formula, you have altered Earth history and the shape of space-time. Not only have you violated Starfleet regulations, but you have also put us all in danger of losing our future existence and at risk for never joining the Enterprise crew again.

Bones: That’s right, Spock. Earth scientists were already hot on the trail of a vaccine. I gave them just a little hint to complete the task at warp-speed, so-to-speak.

Spock: Then you have taken an unnecessary risk…

Kirk: … to spare them a little time…and many lives. Trust in humanity, Mr. Spock.

Kirk: Kirk here. Scotty! Where have you been?

Scotty: We twa hae run about the braes, and pu’d the gowans fine, Cap’n.

Bones: Jim, I suggest you let the xenolinguist try.

[As the landing party beams back to the Enterprise, Emeril appears]

Emeril: Where’d they go? Who’s gonna cover the bill? That doctor drinks like a fish!

Waiter: They just shimmered and slowly disappeared! Bam! Gone! Like they were never here.