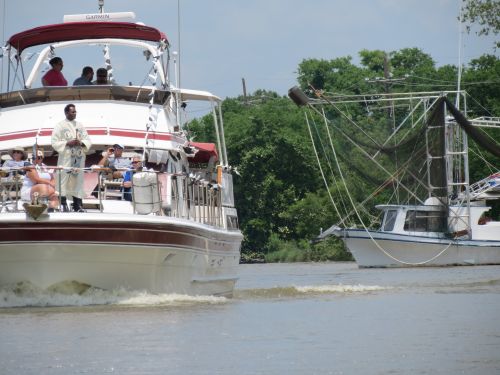 Boat blessings are far from new to the bayou country parishes.

But this past weekend saw a contrast in approaches to the age-old local custom.

On Sunday a traditional boat parade chugged down Bayou Little Caillou as a priest sprinkled holy water from the prow of a double-rigged lead shrimp boat.

The day before, one bayou to the east, another priest blessed vessels as well, from the bow of a 60-foot yacht, which led a parade from the waters beside Bisland Cemetery in Bourg to the Bush Canal south of Montegut.

More than a quarter century ago Montegut hosted a traditional boat blessing, primarily for commercial vessels once seen chock-a-block along Bayou Terrebonne.

Saturday’s blessing was more inclusive; led by a yacht that was trailed by a mix of commercial boats and pleasure craft, it was more than any other boat parade in the parish what could truly be seen as a mixed blessing.

Kevin Belanger, who makes his living as director of the quasi-governmental agency South Central Planning and Development, packed family and friends aboard his 60-foot Genesis.

“The enthusiasm and the effort of those around our community was very good,” Belanger said. “Some of the people have decorated their boats and all came out to the bayou to receive the blessing, and that is the biggest thing, so we are happy.”

Belanger is no stranger to boat parades. He is a founder and strong supporter of the Christmas parade of vessels that plies the same bayou. That event has become a tradition now woven into local fabric.

The Rev. John Nambusseril, pastor of Sacred Heart Catholic Church in Montegut, has long desired a return of the tradition to his community, which is still home to shrimpers, crabbers and oystermen, as well as increasing numbers of recreational anglers.

He sees the inclusive nature of the Montegut event, as it develops, to be a blessing in itself.

“All that we needed to do was bless the bayou, the boats of the fishermen and it was good and satisfactory,” the pastor said. “This shows unity in the community. That Kevin was volunteering his boat was very nice, it was so nice of him to take everyone out.”

Julie Falgout, seafood industry liaison for the LSU AgCenter, agreed that an event including pleasure craft and commercial boats spoke well of how the Montegut community is developing. That Montegut is again hosting a boat blessing, she said. Is a good sign that a community so battered is again rising to its feet.

In Chauvin, the emphasis remains strongly with the commercial sector of local fisheries. The lead vessel bearing Deacon Lloyd Duplantis of St. Joseph’s Church was the 55-foot T-Kim and James.

“This is the first year we have been the lead boat,” said trawler Kim Guy, whose two sons, Kim Jr. and James, work beside him during the season. “It does a lot to your heart. Just having them ask for my boat to do it is an honor.”

Like other local fishermen, Guy is anxiously awaiting word on when Louisiana’s shrimp season will open.

Last year there was a scarcity of shrimp, but prices were high due to diseased populations of pond-raised shrimp in Asia. The light has not abated, so the global market should again be favorable to Louisiana shrimpers, processors and dock owners.

“Now there is a price, but we haven’t seen any shrimp yet,” Guy said. “So we don’t know what’s going to happen.”

As Guy’s guests feasted on boiled shrimp, crabs and crawfish on the vessel’s stern, big trawlers like it pulled into the bayou to join the procession to a wind-driven Lake Boudreaux.

As the big boats, festooned with pennants and religious icons maneuvered the bayou, smaller recreational craft bounced alongside them like frolicking dolphins.

Lt. Mike Ledet of the Terrebonne Sheriff’s Office Water Patrol led the processions in both Montegut and Chauvin, warning away vessels that were not involved and ensuring safe passage for the boats.

“I felt honored. After everybody is there my concern is safety, and making sure the boats return safely.”

Ledet assisted several boats that were distressed but no injuries were reported.

“Little Caillou was a much bigger event as usual but in Montegut it seems like more people were getting into it, so that it can become a little bit bigger each year,” Ledet said.

Deacon Lloyd Duplantis of St. Joseph’s Church blesses boats along Bayou Little Caillou Sunday from the bow of the trawler T-Kim and James.