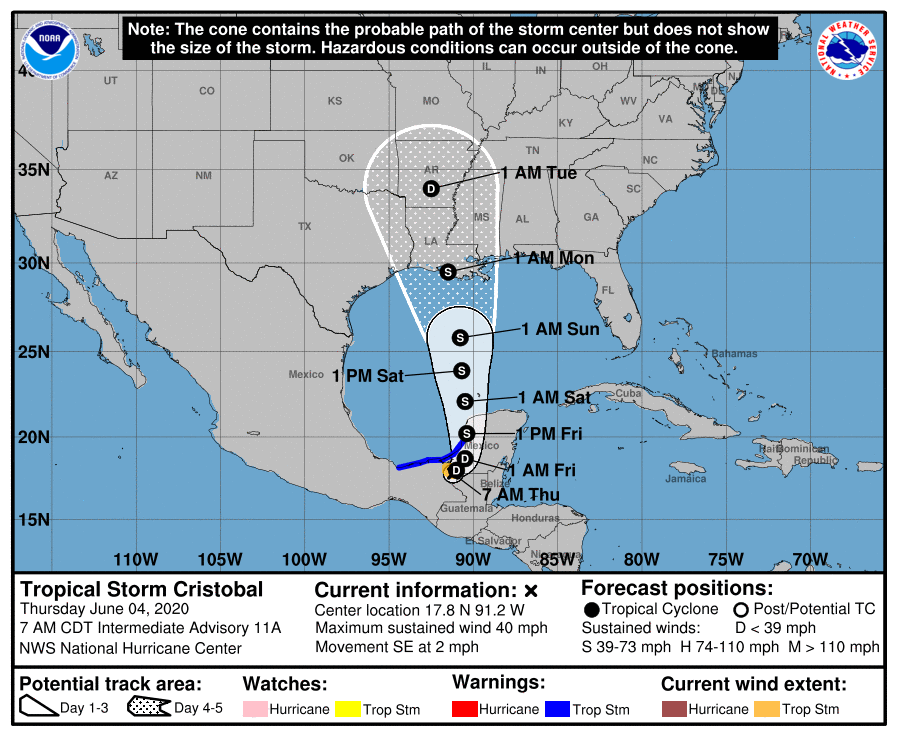 As we wake up this morning, Cristobal is a little bit weaker, having stalled over land in Mexico. It is still expected to move into the Gulf of Mexico on Friday and head on a northwest path towards the United States. The path still has it hitting the Louisiana coast overnight Sunday into Monday morning as a Tropical Storm, but weaker at 60 mph. The cone reaches from around Pascagoula, Mississippi to Galveston, Tx. The models currently name Terrebonne Bay as the target for the eye as of this morning.

At 700 AM CDT (1200 UTC), the center of Tropical Storm Cristobal was located over southern Mexico near latitude 17.8 North, longitude 91.2 West. Cristobal is moving toward the southeast near 2 mph (4km/h), and this motion should continue this morning. A turn toward the east and northeast is expected later today, and a subsequent northward motion should occur through Saturday. On the forecast track, the center will move over the land mass of eastern Mexico today and tonight. The center is forecast to move back over the southern Gulf of Mexico Friday or Friday night, over the central Gulf of Mexico on Saturday, and approach the northern Gulf of Mexico coast Sunday and Sunday night.

Maximum sustained winds are near 40 mph (65 km/h) with higher gusts. Cristobal is expected to weaken to a depression later this morning. Re-intensification is expected to begin on Friday.