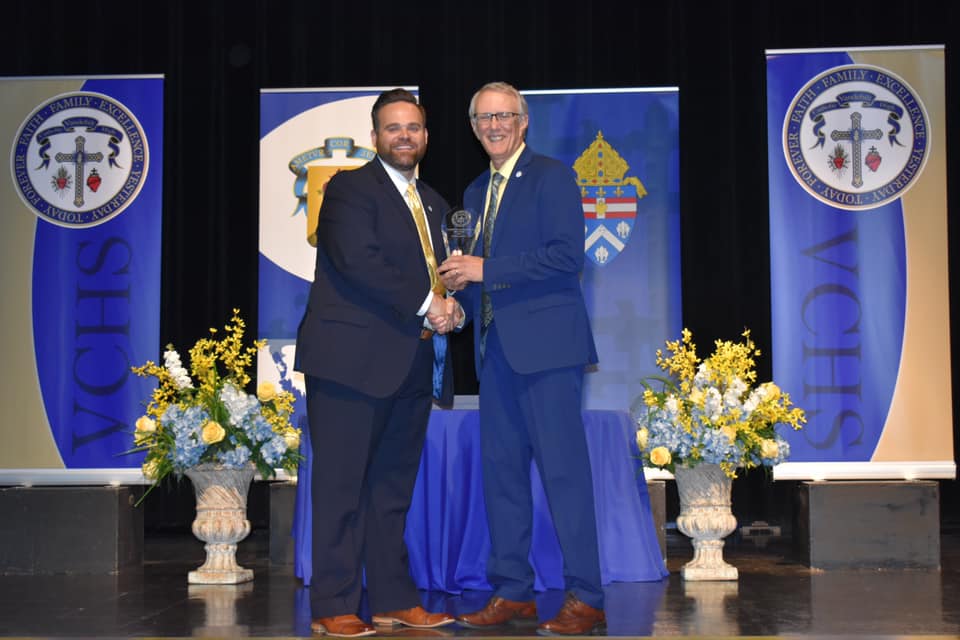 Vandebilt Catholic High School held its first President’s Banquet which allowed the school to celebrate members of the community who have helped make the vision of Vandebilt Catholic become a reality or whose lives reflect the values of the school’s mission.

“We were able to recognize three outstanding members of the Vandebilt community as well as honor many of our previous award recipients in attendance.” Jeremy Gueldner, VCHS President, said. The Vandebilt Catholic Distinguished Service Award recognizes a volunteer who has worked throughout the 2020-2021 school year which helped VCHS accomplish its mission in the areas of arts, academic, or athletics. VCHS department leaders nominated volunteers and the recipient was voted by a committee of administration and faculty members.

Each year, a graduate of Vandebilt Catholic, Houma Central Catholic High, or St. Francis High School is recognized as Alumnus of the year. The school says the recipient of the award showcases “the manifestation of lessons about service to others, wholeness of character, and living as a Christian example learned as a Catholic school student.” The nominees for this award are rendered by a committee of administrators, faculty, and alumni. 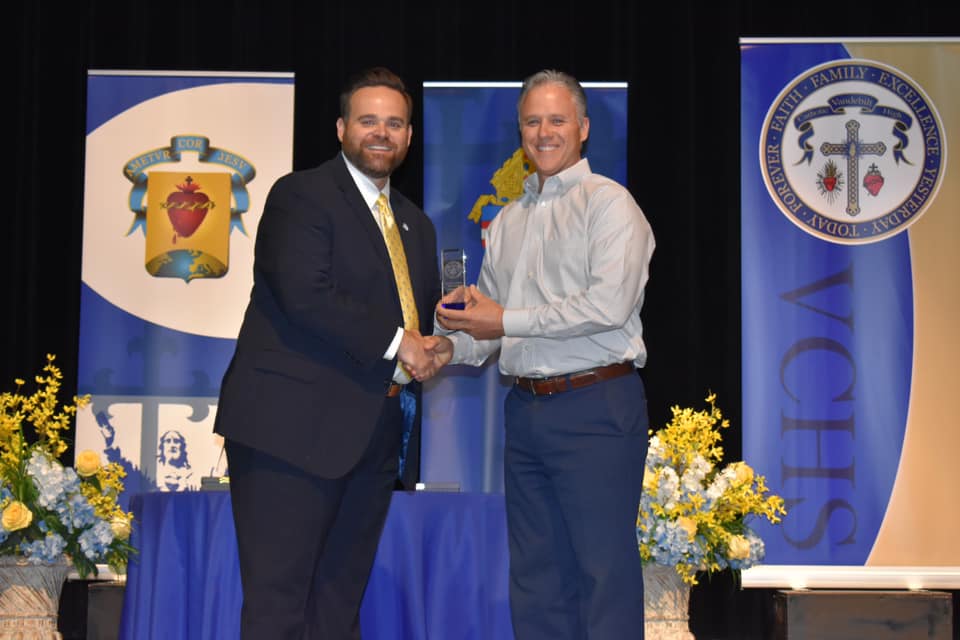 At this year’s banquet, Richard “Ricky” Alston received the Distinguished Service Award. VCHS president said, “It is absolutely amazing the amount of time and energy that Ricky Alston dedicates to Vandebilt Catholic. Through his work with the VCHS Terrier Club, Ricky has spent countless hours promoting our school, coordinating events, and raising much-needed money to support our students.

For me the clearest piece of evidence that Mr. Ricky Alston was the choice for this award was that when I called Ricky to tell him he had won he was hesitant to accept it – he did not want to be recognized for what he was doing and what he had done.

Ricky is a great example of what service should look like – he has never been concerned about recognition – it has always been about service and about helping Vandebilt Catholic realize its mission.” 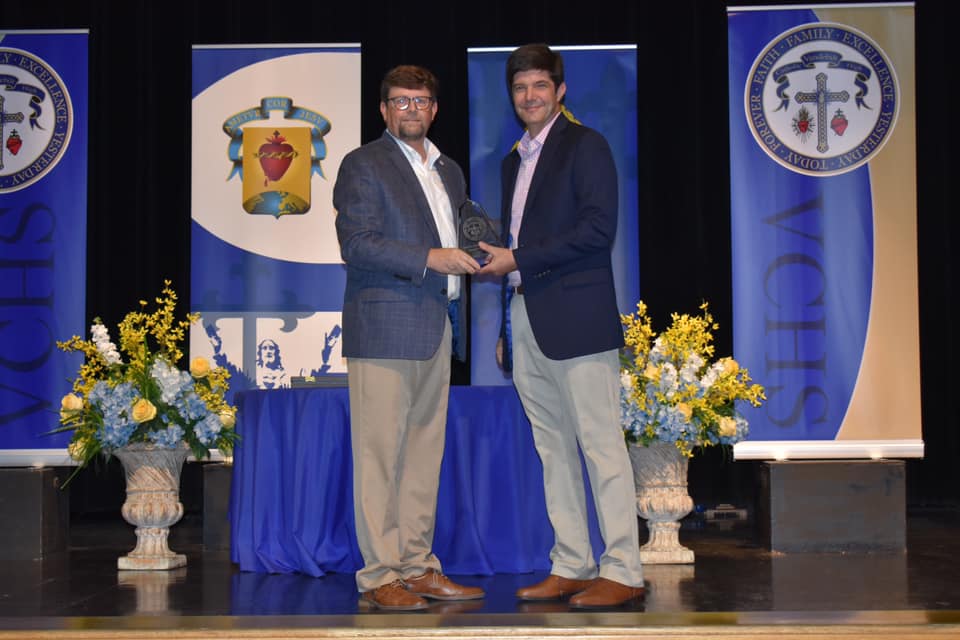 Logan “Hank” Babin III was the recipient of the Alumnus of the Year award. After graduating VCHS, Babin earned a degree in Finance from Loyola University and an MBA from Baylor University. After his return to Houma, he started the 3rd generation of service at Babin Real Estate. He serves as a commercial/industrial agent, appraiser, and counselor. He has served the community in various capacities. He is a member of the Counselors of Real Estate (CRE), National Association of Realtors, the Louisiana Realtors Association, the Bayou Board of Realtors. In addition, he served on the Houma-Terrebonne Chamber of Commerce Board of Directors and Economic Development and Infrastructure Committee, and the Terrebonne Economic Development Authority’s Retail Task Force. Babin has also served the community through various volunteer efforts including United Way, Leadership Terrebonne, Rec Reform for Terrebonne, St. Bernadette Catholic Church’s Men’s Club, Youth with a Mission to Haiti, (where he and his family have been part of the Home for Hope Building program), Houma Terrebonne Soccer Association and Bayou Country Sports Park Committee as well as several other social organizations that support excellence in the community. VCHS Advancement and Alumni Director Doug Hamilton said, “There are many things that I could list about why Vandebilt Catholic is honoring Hank Babin, but when one sees the ministry work that not only Hank has engaged in, but also his wife Carrie and their four girls…the respectful way that they have conducted themselves as long as I have known them, it becomes easy to see that Hank is someone that Vandebilt Catholic can lift up as a model graduate.” 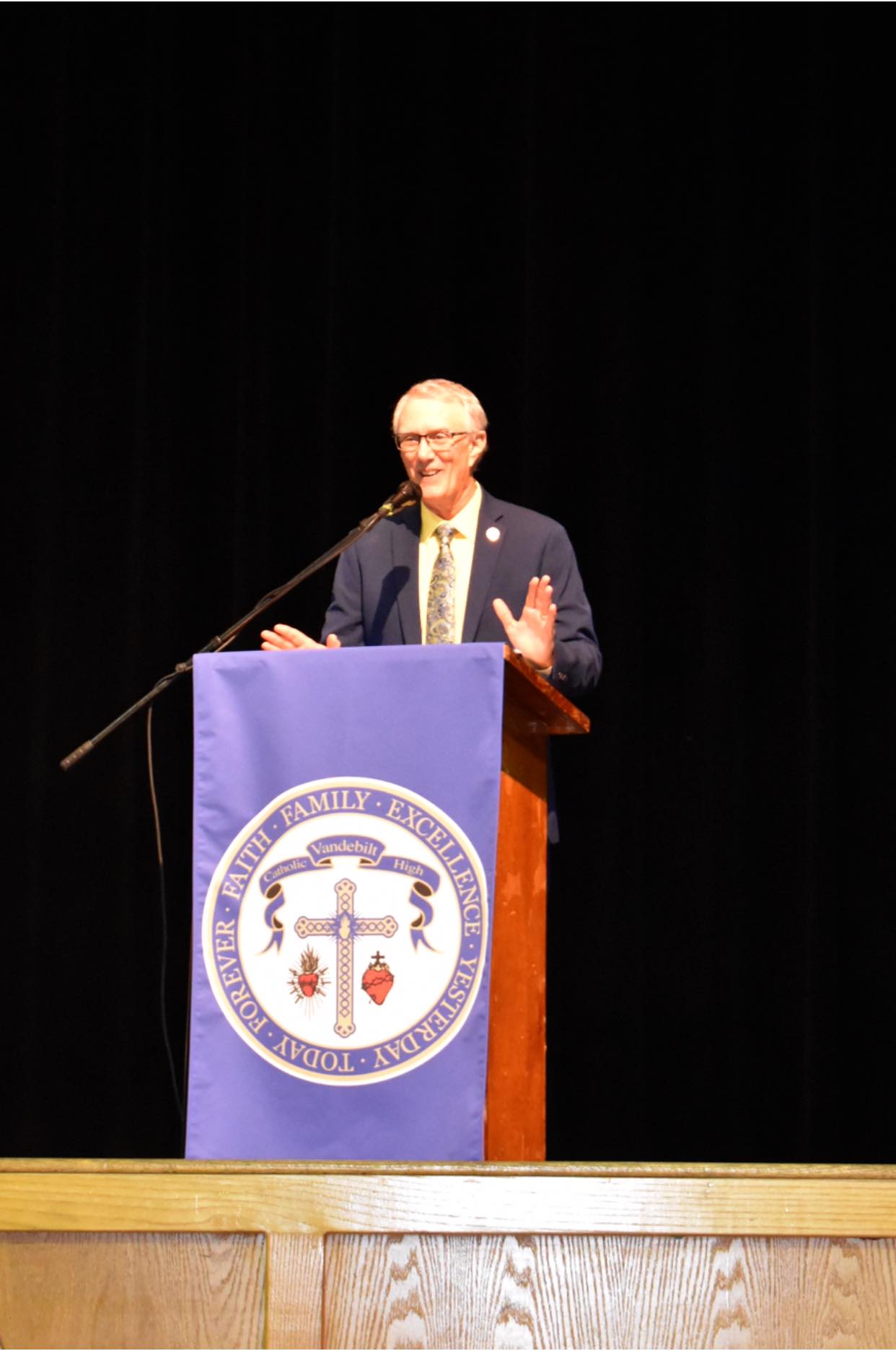 David Boudreaux was inducted into the VCHS Hall of Fame. He has an extensive 37-year tenure with the Diocese of Houma-Thibodaux. He is a Thibodaux native who graduated from E.D. White Catholic and earned a music degree from Nicholls State University. Boudreaux went on to accept the position of director of bands at Vandebilt Catholic upon college graduation. During this time, he was also teaching music at St. Bernadette Elementary and religion at Vandebilt Catholic. He was later named band director at Houma Jr. High and went on to pursue a master’s degree in administration and supervision. After returning to VCHS as band director in 1990, he also assumed the role of dean of students in charge of discipline for the second half of the 1990-1991 school year. He became a full-time assistant principal and taught Video Journalism, and had an integral part in building the school’s first TV studio. He was named principal of his Alma Mater, EDW, in 2000. He became the school’s first president for the 2006-2007 school year and eventually moved to that role at VCHS in 2014. He was named district band director of the year twice and the State Bandmaster of the Year. He served the District VII Marching Band as president, vice-president, District VII Marching Band Coordinator and Director. Boudreaux was chosen as a board member for the Louisiana Music Educators Association and served as district director, and band division chairperson. He directed the Louisiana Bandmasters Association State Marching Band where he directed over 530 young musicians at Tiger Stadium.

Boudreaux has served as a member of the employee benefits committee, technology committee, strategic planning committee, as well as vice-president and president of the Diocesan School Advisory Council (school board) over the years with the Diocese of Houma-Thibodaux. He served as a member of the School Leadership Committee for the Brothers of the Sacred Heart for 20 years and was also a member of the Coindre Leadership Program as a participant and mentor.  Named for the founder of the Brothers of the Sacred Heart, the program develops Catholic school leaders and potential leaders by utilizing mentors and important hands-on experiences.  Boudreaux is currently a board member for the V Foundation of South Louisiana whose current mission is to assist VCHS in overcoming the challenge of increasing teacher compensation without raising tuition.

Vandebilt Catholic President Jeremy Gueldner said, “This was really a very special night. I think one of the things we have all missed for the last year is a sense of community. This event was not only a celebration of three amazing people but also a celebration of the entire Vandebilt Catholic community. It was wonderful to see so many familiar faces; it really felt like there was an energy in the room from so many people being able to socialize with friends that they had not interacted with in a while.”