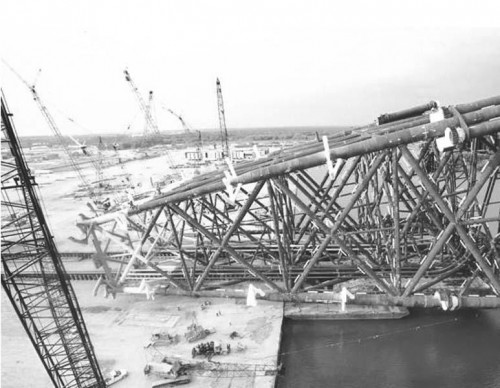 The load-out was built for Reliance Industries Limited as part of an engineering, procurement, construction and installation contract/purchase order undertaken at J. Ray company facilities worldwide.

The project took just over 23 hours – from start to finish – and a company spokesman said it was the culmination of just over 12 months of work fabricating the jacket for the KG-D6 field on India’s east coast.

Now, the jacket has a 13,375 nautical mile journey ahead.

It’s first stop, however, will be in Pascagoula, Miss., where it will rendezvous with a fast transport vessel, company officials said. The jacket and cargo barge will be loaded onto the FTV for a 46-day trip to the J. Ray Marine facility in Batam, Indonesia, via the Suez

“This is the first structure we have built here at Morgan City for export to India,” said Bob Deason, president and chief executive officer of J. Ray. “The Reliance KGD6 field development contract was a fast-track project, and we were able to use our company’s worldwide resources to ensure we met our customer’s delivery deadline for first gas from the field by June 2008.”

The jacket was built at J. Ray’s Morgan City fabrication facility. The piles and topsides are currently being fabricated at the company’s Jebel Ali facility in the United Arab Emirates, with the piles scheduled for load-out in late August 2007 and the topsides scheduled for sail away in early 2008, officials said. Design and engineering work were completed by J. Ray McDermott Engineering in Houston, and all installation work will be carried out by J. Ray’s in-house marine fleet.

Once the jacket and topsides are installed, hook up and pre-commissioning will commence, with expected completion during the first quarter of 2008, bringing the entire project to a close in approximately 22 months.