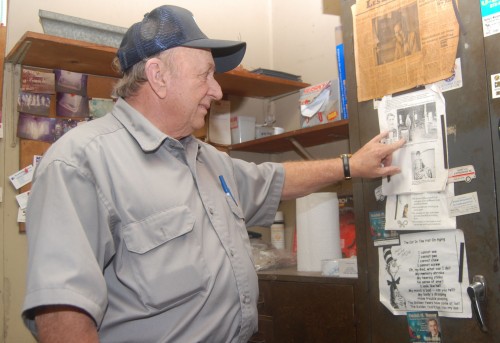 Rene the Tinner marks end of an era

Don’t let the tin siding fool you. Rene the Tinner’s shop on Main Street in Houma has a lot to offer.

“This started out as a blacksmith shop owned by the Porches,” company co-owner Warren Clement Jr. said. “I think that’s a piece of history that no one may really know about this building.”

Since 1933, three generations of Clements – Warren Jr., his brother Alfred, their father Warren Sr. and their grandfather Rene – have provided roofing and general sheet metal services in the area. Warren Clement Jr. and Alfred’s brother-in-law Robert Oncale is also involved in the business.

Rene the Tinner’s history is only about 30 years younger than the building.

The blacksmith shop was opened around the turn of the 19th and 20th centuries, and Rene the Tinner’s business opened in 1933.

“After 1933, the only solid record we have of the year we opened is an old bank book from that year. I had an aunt, who is now gone, that told me the business may have opened in 1926, but we don’t have records to back that up,” Clement said as he looked over an old newspaper clipping on the old blacksmith shop.

Clement still remembers the changes that needed to be made in the shop to convert it for his family’s uses.

“We kept the old blacksmith forge, but we poured the cement inside the building,” he said. “The dust would fly in here when they would drop the big sheets of metal. You couldn’t see anything.”

Right next to the shop sits a small white house where Clement’s father grew up.

“The house may be even older than the blacksmith shop,” he said.

“[After,] my dad was in World War II and when he came back, he took over the business,” Clement said. “I was born in 1948, but I don’t remember my grandpa working. He had a bad heart and the only thing they had to give you for that back then was nitroglycerin pills. He made good money back then. You can’t make money like that anymore.”

During the war, the tough war economy, the shop faced an uncertain future.

“During WW II, the only people who could get metal around here were those in the food industry,” Clement said. “Some of the Cheramies owned a store or a restaurant, and they got my dad a lot of metal during the war. That helped keep us afloat.”

Clement recalled his first job around the shop as a child.

“I answered the phone in here when I was a kid,” he said. “When I couldn’t spell a word for a message, I’d run and ask my aunt.”

Over the years, the Rene the Tinner has also made ducts, awnings, chimney tops, deer feeder covers, custom jobs and even cisterns.

“My grandpa built and delivered cisterns to Grand Isle before they had water,” Clement said. “Some people called us asking to make them cisterns after the recent hurricanes, but we don’t get many calls for them these days. They have become a thing of the past because people are making them out of plastic now.”

Despite changes in the way things were built, the Clements stayed the course.

“We didn’t want to branch out,” Clement said. “Stick to what you know and do it the best you can.”

“We’ve never taken a signed contract. You trust me to do the work, I trust you to pay me,” Clement said. “I’ll pester you ‘til you pay. No computers and no charge card machines around here. I work off a ledger book.”

For Clement, the end of family traditions may be just a short way down the road, a fact that does not bother him.

“I don’t want someone buying this business,” he said. “Some people have approached me about buying the business, but they just want to buy the name and don’t know anything about roofing. This may be the last generation of the shop.”

Clement remembers when only family members ran the company. “Not many in my family want to take this up, and it’s hard to find other workers,” he said. “Lots of young people don’t want to learn a craft like this, no matter what you pay them. Not many want to do manual labor anymore.”

Two of Clement’s employees, Mark Sell and Issace Scott, remain for the long haul. Each have been there for over 20 years.

“I came here not long after high school and learned the trade on the job with Warren Sr.,” said Sell, who does miscellaneous sheet metal work. “Working here, I enjoy getting to know the customers and having this craft.”

“He came knocking on my door knowing nothing (about the sheet metal business) and now he could probably run the place,” Clement, said, recalling when Sell was hired.

Skilled workers like Sell and Scott are hard to find nowadays, but that is not the only thing that has changed Clement’s business.

“Computers are taking some of the business. People find someone to do the work for cheaper online,” Clement said. “Things that I used to make, like fence post caps, I order now so I can keep up.”

Even with the changes to the business, the shop soldiers on, continuing with roof work and custom jobs.

Warren Clement Jr. of Rene the Tinner in Houma looks over old news clippings about the building that has housed his family’s sheet metal and roofing company since 1933. Prior to that, the building was used as a blacksmith shop. The original forge is still standing in the building.