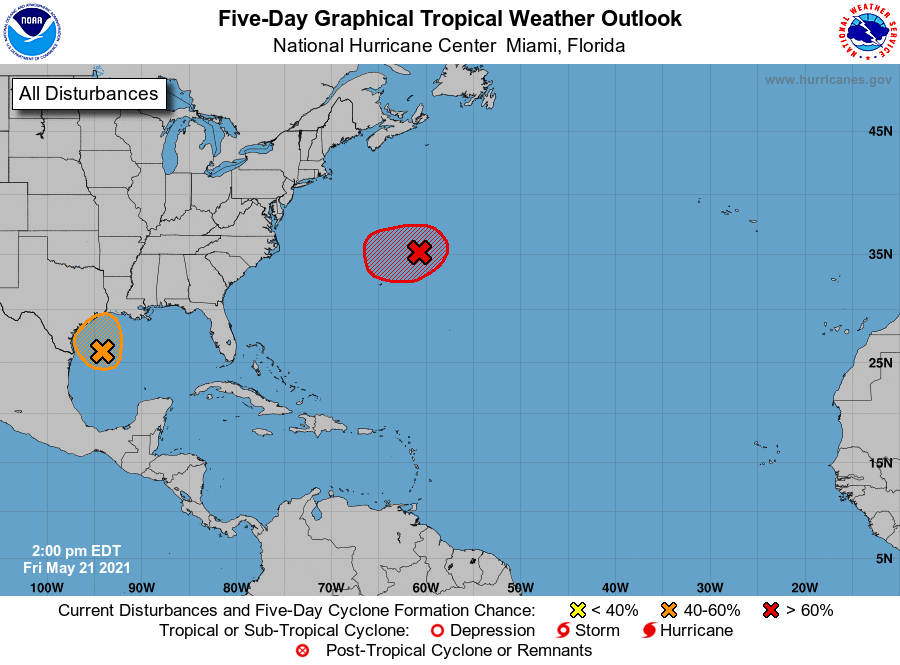 The National Hurricane Center’s 1pm forecast has increased the chances of Invest 91L developing into a tropical system in the 48 hours to 60 percent. It would be a short-lived named storm,  as the system is expected to move inland over Texas tonight, bringing with it heavy rainfall.

Surface observations and recent satellite wind data indicate that a well-defined low pressure system over the western Gulf of Mexico has winds of 30-35 mph near and east of the center. The associated shower and thunderstorm activity remains limited, but any increase in this activity may result in the formation of a short-lived tropical depression or storm before the system moves inland over the northwestern Gulf coast tonight, and potential tropical cyclone advisories may be needed as early as this afternoon.

Regardless of development, the system could produce heavy rainfall over portions of southeastern Texas and southwestern Louisiana through Saturday. Given the complete saturation of soils with ongoing river flooding along the Texas and Louisiana coastal areas, heavy rain could lead to flash, urban, and additional riverine flooding across this region.

In the Northern Atlantic, showers and thunderstorms associated with a non-tropical low pressure area centered about 300 miles northeast of Bermuda have diminished somewhat over the past several hours, and the system has not yet acquired subtropical storm characteristics. However, any increase in organization would result in advisories being initiated on the system later today or tonight as it moves westward to west-southwestward to the northeast of Bermuda. Subsequently, the low is forecast to move northeastward into a more hostile environment by Saturday night or Sunday. This disturbance has a 90 percent chance of formation in the next 48 hours.