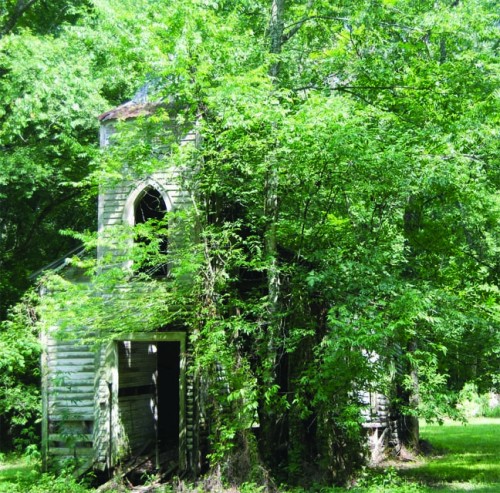 St. Luke Baptist Church is easy to pass by while driving through Chackbay.

What was once the spiritual center of an independent black community is dilapidated. Overgrowth has nearly blended the property with the woods. Its history is slowly fading from the collective conscious.

But a group of current and former Nicholls State sociology students has embarked on the Little Zion/St. Luke Baptist Church Service Learning Project in hopes of rediscovering the historical contributions the church laid for African-Americans in south Louisiana and Lafourche Parish in particular.

“This allows us to look at that part of southern history that somehow doesn’t always get into the textbooks,” said Dr. James A. Butler, Nicholls associate professor of sociology and principal investigator on the project.

The Nicholls State Sociology Club took a big step toward capturing some of the last memories of St. Luke before it was abandoned in the late 1960s.

On July 26, the club gathered members of the Shanklin and Woods families, descendents of one of the church’s founding families – the Parks – at the Moses Community Center in Thibodaux. The purpose was to collect oral histories from members who attended the church.

“This needs to be done because there are too many stories that get lost,” said Tom Shanklin, a second-year Assumption High School Spanish teacher. “I don’t remember that church as a kid growing up in the early 1960s. Obviously, it was there.”

“This is a beautiful thing,” said Priscilla Macintosh, the great-great-great-granddaughter of founding members Joseph and Sarah Parks. “I was surprised because I learned some new information besides the information I collected over the past year. I only remember the church as a little bitty girl in the 1950s.”

Most of the oldest Shanklin family members could not make the mini-reunion, but the club did conduct nine interviews, three from those who attended services at St. Luke.

‘The family members have been very cooperative,” said Tina Granger, research associate for the Little Zion/St. Luke’s Baptist Church Project. “They are very interested in helping us move forward on this project.”

For the students, the experience does not just fulfill an academic pursuit. It helps them understand the impact of their work on the people and themselves.

“I felt great talking to the different people,” said Ja’costa Parker, 18, a sophomore sociology major from New Orleans. “Hearing how they feel about St. Luke, what they know about St. Luke, makes it more than just a church … it was a community.”

Driving to pick up his grandson from Sixth Ward Middle School in 2006, the old abandoned church on Louisiana Highway 20 caught Dr. Butler’s eye. He knew immediately it was something he wanted his students to investigate.

“Prior to that, I had been talking to students about doing community service and other research projects,” he said, “but I was looking for something a little different, and I was interested in service-learning.”

The idea was to bind academia and the community together to make students much more rounded. In the fall 2006 semester, he challenged Granger, then-president of the Sociology Club, to head the task.

“Dr. Butler asked me this one question,” she recalled. “‘Mrs. Granger, have you considered that little church in Chackbay?’ I had no idea what he was talking about. I had never seen it, didn’t have any history, and neither did anyone else.”

Granger and the rest of the Sociology Club began their research in the Lafourche Parish Clerk of Court office trying to find ownership records.

The first six months proved fruitless. While people in Chackbay knew the church as St. Luke, all the legal records were under its original name, Little Zion Baptist Church.

“From finding the title Little Zion, all the land titles came forward, and the names of individuals came forward,” said Granger, who graduated in May with a Bachelor of Arts degree in sociology and Associate of Science in paralegal work.

Little Zion sits on Lot 15 of what was once Cleona Plantation.

After the Civil War, the land was sold twice, first to a Leon Guidry in 1868, and then four years later to Louisiana Nelson and Washington Dunn.

On Sept. 4, 1882, Nelson and Dunn separated the land and sold the property to the congregation of Little Zion Baptist Church.

“The church was not incorporated until 1891 but that was quite an achievement for an African-American church at that time,” Granger explained.

Little Zion’s roll of incorporation listed 30 members over the age of 21, seven of whom were members of the Parks family.

The ancestors were Joseph and Sarah Parks, slaves emancipated after the Civil War. They had 12 children, seven of whom survived.

Parks and the other founding families of Little Zion did back-breaking, labor-intensive jobs to earn a living – farming, moss gathering, tree cutting, making railroad ties or day laboring in the sugarcane fields. A few found work in the nearby Bowie Lumber Mill.

On Jan. 2, 1878, Joseph bought 40 acres of land across from Grand Bayou in a joint venture with Gabriel Vicks and Michel Mitchell. The trio paid $500 – with a down payment of $300 and two annual payments of $100 – at eight percent interest for the property. It was a tremendous feat for the black men to independently own land.

The church and the community were unified and thrived for about a quarter-century. In 1907, however, there seemed to be a separation of church membership.

“Part of the Parks family moved a little further up toward the Thibodaux area, and they began a new church called Little Zion,” Granger said. “The remaining family members of the Parks and the Vicks family chose to stay at the old church.”

Where did everybody go?

On Jan. 25, 1907, the church was sold to the congregation. A new name was chosen: St. Luke Baptist Church, by which it is known in the community to this day.

Despite being an African-American church in a mostly white rural area, no family members who attended St. Luke can recall any racial tension in Chackbay. Historical research also turns up nothing.

“It was weird,” said Larry Woods, 49, who grew up near St. Luke. “Most of the trouble they (church elders) had was from us being us, doing the things we were doing. Good thing we had some serious icons, serious heroes, strong people of faith, God and life.”

Many would mature from their youthful indiscretions to become prominent in the church themselves. Over time, they would also move on and start their own churches not far from St. Luke.

Woods’ grandfather, the Rev. Joseph Woods Sr., started a congregation in Greenwood. His brother, the Rev. Alex Woods, ministered at a church in Labadieville.

In the late 1960s, St. Luke held its last congregational meeting. The Rev. Andrew Robinson, who was the father-in-law of Woods Sr., was the last known presiding pastor of St. Luke’s Baptist Church.

The congregation dispersed to Greenwood, which is no longer in operation, or other churches in the surrounding area. St. Luke had survived a cholera and two yellow fever outbreaks in 1890s, Jim Crow segregation and Hurricane Betsy in 1965, but depopulation was its undoing.

When the church disbanded, 80 years of African-American history nearly went with it. Their stories of success over the toughest of odds were almost lost to history.

“They were farmers and workers who held on to their property – held on to their church,” Granger said of the landowners. “They went through the hard times of civil sanctions that were placed against African-Americans and came through. In their family are educators and doctors and lawyers today. They were an independent group of African-Americans that was very rare in rural south Louisiana.”

“To my eye, it was beautiful,” recalled Granger of first seeing the abandoned St. Luke in fall 2006. “As an oil painter, I could see the beauty of this church. Its lines were perfect. It was built with perfect symmetry, meaning its roofline continued into the line of the alcove.”

In spite of its decaying condition, the church still stands. That is a testament to the craftsmanship of the builders who tapped into the local Bowie Lumber Mill’s cypress for materials. The beams extend 24 feet high, 9 inches-by-6 inches deep in solid length.

“Being a contractor, that is beautiful lumber,” Granger said. “The ceiling lats are set very close, which secure a tight fit against hurricane winds. The walls are built with a beam running sideways, which is an architectural feature that adds 100 times support against wind sheer. It is probably the reason the church still stands today. That was only discovered this past semester due to some of the planks falling.”

Regardless of its aesthetic quality, the church also has a gloomy side. From the interior markings, it is clear that séances and other ritual acts were performed inside since its desertion.

There has been much graveyard desecration and theft there – the bell tower, pews, windows, and iron railings have vanished into the wind.

In April 2007, Butler led about 40 of his students on an extensive cleanup of the graveyard. In the process, 13 graves were discovered at the site, more than the nine originally thought to be there.

The students – not Butler, who serves more as an advisor and director – have done the majority of the research of census and genealogy records on the Little Zion/St. Luke Baptist Church project.

“The history of this particular project has been divided among several students – Tina Granger, Lakesha Woods, Yolanda Jenkins, Olinda Ricard – just to name a few,” he said. “My joy comes from watching students participate, work and discover, and being excited about what they’ve discovered.”

Last year, Butler and Granger applied for and received a grant from the University of Louisiana System.

This semester, research will focus on Cleona Plantation and the socio-economic factors that affected the church in the 1890s.

Butler anticipates the 2008-09 year to be the final year of research on the project. Once everything is compiled, he hopes to present the findings at a national conference.

“The long-term goal is to do a much more holistic assessment beyond the church itself, but particular to the history of that church,” Butler explained. “Also, the placement of all that information in NSU’s Ellender Library for all who come after us and have an interest in Little Zion, that data will be there. You can go to bazaars, various functions and restaurants in Baton Rouge, for instance, and find a mural of Little Zion Baptist Church on the wall.”

On Monday, students who have worked on this project will present a PowerPoint presentation and a hands-on exhibit at the Claiborne Building in Baton Rouge of all the progress they have made.

The presentation is only a glimpse into a forgotten tale of black determination to overthrow the chains of slavery and realize the promise of the American dream.

“Sometimes you find out, especially if you’re African-American, when you start finding out your history, the only time you can find out about it is through some legal document,” Shanklin said. “(The project) may not tell the story, but the result of the story. You just don’t know the whole story.”