The one that got away

Exhilarating Case of the BLUES 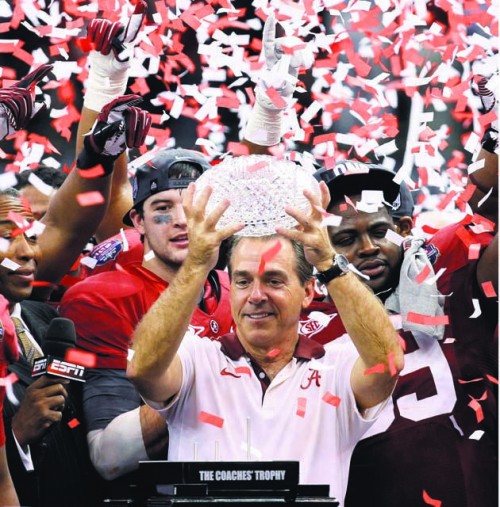 Boos rained down from a corner of the Superdome dominated by purple-and-gold clad fans as LSU quarterback Jordan Jefferson trotted onto the field for a crucial third-quarter drive.

One more victory in the final game of his career could have made Jefferson the toast of Baton Rouge and completed a stirring story of personal vindication after an early season defined by trouble with the law and a four-game suspension.

Instead, his most memorable play was an unfathomable interception in a 21-0 loss to Alabama (12-1) in Monday night’s BCS title game, marking the first time LSU (13-1) had been held scoreless since the Tide did it to them in 2002.

“It feels like a nightmare, but it’s a learning experience,” Jefferson said. “I’m facing reality. LSU finished second today. We all have to take the situation and learn from it, but still in all we still had a great season. I had a pretty good career at LSU. This last game really was something we wanted to win but we fell short.

“Everybody on this team is going to learn from it and I’m quite sure LSU will get back to the national championship once again.”

There will be a lot to learn for the teammates Jefferson leaves behind.

LSU’s offense was even more inept than it had been in 9-6 overtime victory in Tuscaloosa. Every first down n all five of them n seemed like an epic struggle. Series after series ended with Jefferson taking a frustrated walk to the sidelined while punter Brad Wing trotted past in the other direction to send the ball back to the Crimson Tide.

LSU was outgained 384-92. The Tigers’ running game, which consists in part of Jefferson’s option runs, managed a meager 39 yards.

The quarterback had to try to beat Bama with his arm, but struggled to find open receivers down field.

“I was seeing everything clearly. Making decisions wasn’t an issue,” Jefferson said. “We just didn’t get it done on offense. Some defenses have your number and Alabama had our number.”

Jefferson finished 11 of 17 for 53 yards and one interception that could have been far more costly than it was. Yet the play seemed to symbolize Jefferson’s night.

When LSU was 13-0 and ranked No. 1, Jefferson’s 684 yards passing and six touchdowns looked more like the product of efficient and fittingly conservative quarterback play on a team that did not really need to throw much to win.

But when LSU’s running game got bogged down in the biggest test of the season, there was no answer in the passing game.

He had said just days earlier that if the Tigers beat Alabama on Monday, that his team would have to be considered the greatest ever fielded by LSU.

Instead, the Tigers’ pursuit of perfection ended in a shutout.