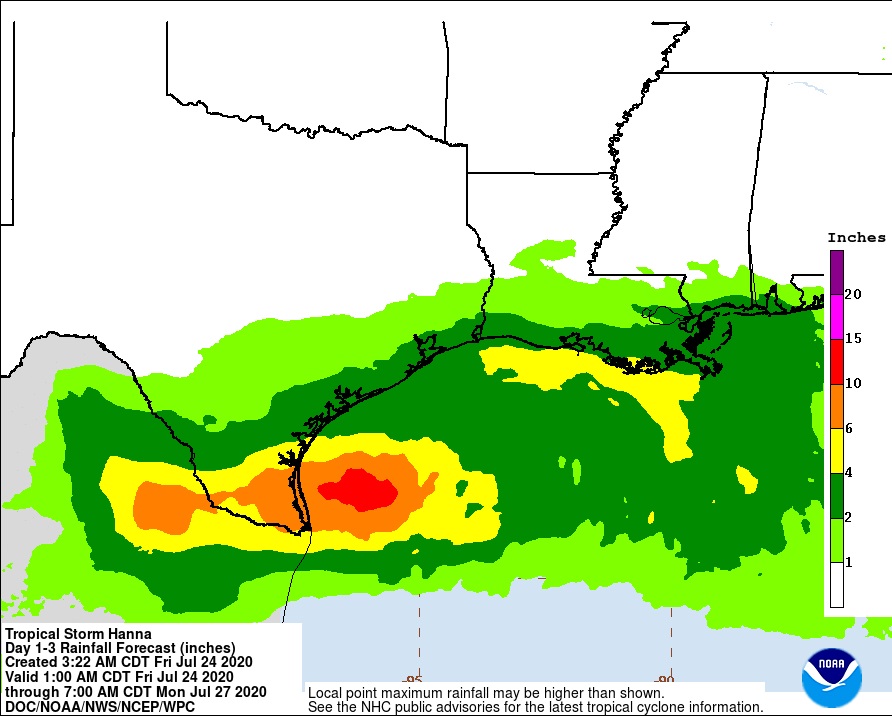 This morning, Tropical Storm Hanna is located a tad further north than originally thought. Here in Louisiana, we are expecting 3 to 5 inches of rain associated with this storm. Outside of any thunderstorm activity, winds will remain breezy in and around coastal areas through Saturday. Locally heavy rainfall possible in any heavier bands of showers and storms at any point tonight through Saturday. Watch for localized flooding as we remain in a Marginal to Slight Risk for excessive rainfall through Saturday. Higher than normal tides will continue to produce some coastal flooding along coastal southeastern LA and southern MS. More so in and around areas that traditionally see coastal flooding from enhanced onshore wind flow. 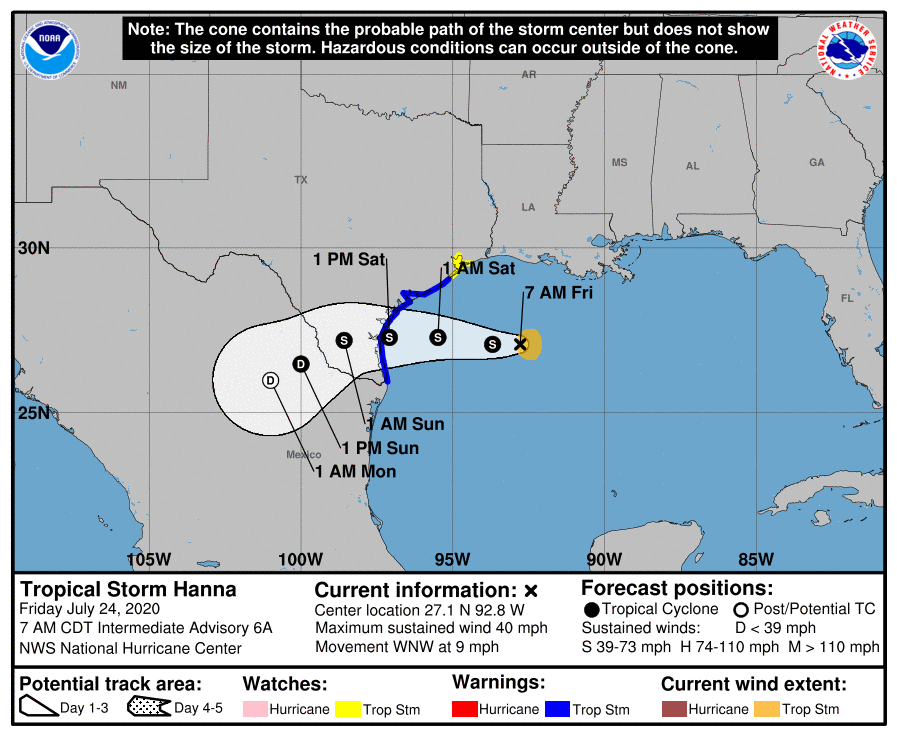 At 7 a.m. CDT the center of Tropical Storm Hanna was located over the Gulf of Mexico about 285 miles (460 km) east of Corpus Christi, Texas. It’s moving toward the west-northwest near 9 mph (15 km/h) and a turn toward the west is expected tonight, followed by a generally westward motion through the weekend. On the forecast track, the storm center should make landfall along the Texas coast within the warning area on Saturday.

Maximum sustained winds are near 40 mph (65 km/h) with higher gusts. Tropical-storm-force winds extend outward up to 45 miles (75 km) from the center. During the past few hours, a buoy located east of the center reported a sustained wind of 38 mph (61 km/h) and a gust to 52 mph (83 km/h). Gradual strengthening is expected to take place until the tropical cyclone makes landfall. Steady weakening is expected after Hanna moves inland.

Hanna is expected to produce 4 to 8 inches of rain with isolated maximum totals of 12 inches through Sunday night in south Texas. This rain may result in life-threatening flash flooding, rapid rises on small streams, and isolated minor to moderate river flooding in south Texas. 3 to 5 inches of rain is expected along the upper Texas and Louisiana coasts, and inland to the Mexican states of Coahuila, Nuevo Leon, and northern Tamaulipas. 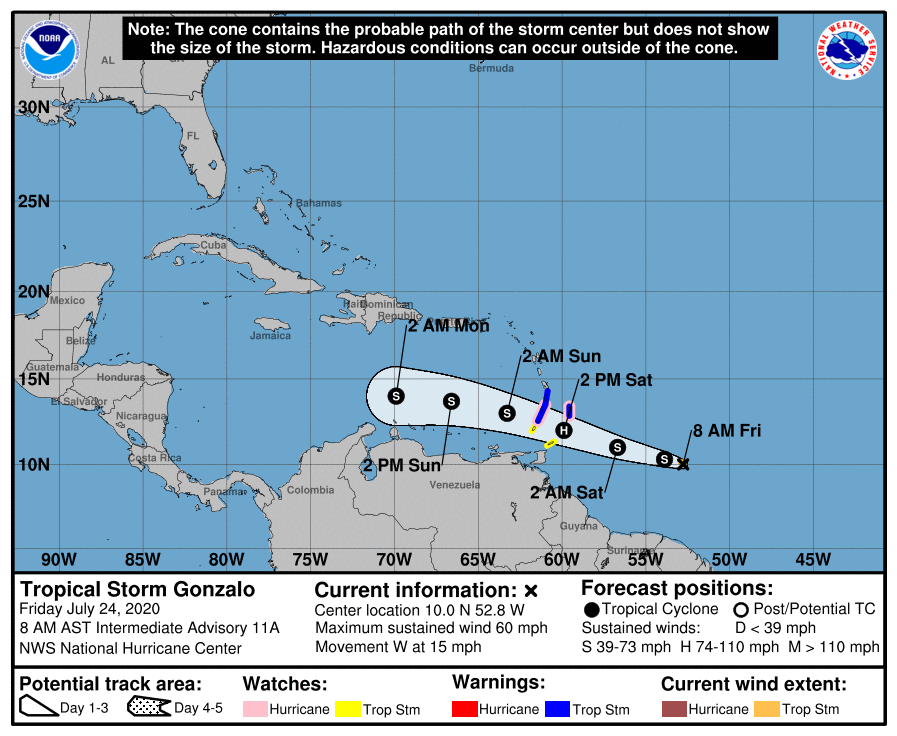 At 8 a.m. AST, the center of Tropical Storm Gonzalo was located over the Atlantic Ocean about 580 miles (930 km) east of the southern Windward Islands. It’s moving toward the west near 15 mph (24 km/h). A westward to west-northwestward motion with an increase in forward speed is expected through the weekend. On the forecast track, the center of Gonzalo will approach the southern Windward Islands tonight and then move across the islands on Saturday and over the eastern Caribbean Sea on Sunday.

Maximum sustained winds are near 60 mph (95 km/h) with higher gusts. Gonzalo is a small tropical cyclone. Tropical-storm-force winds extend outward up to 25 miles (35 km) from the center. Some strengthening is forecast during the next day or two, and there is still a chance that Gonzalo could become a hurricane before reaching the Windward Islands. Weakening is expected after Gonzalo moves into the Caribbean Sea, and the cyclone is expected to dissipate by the middle of next week. 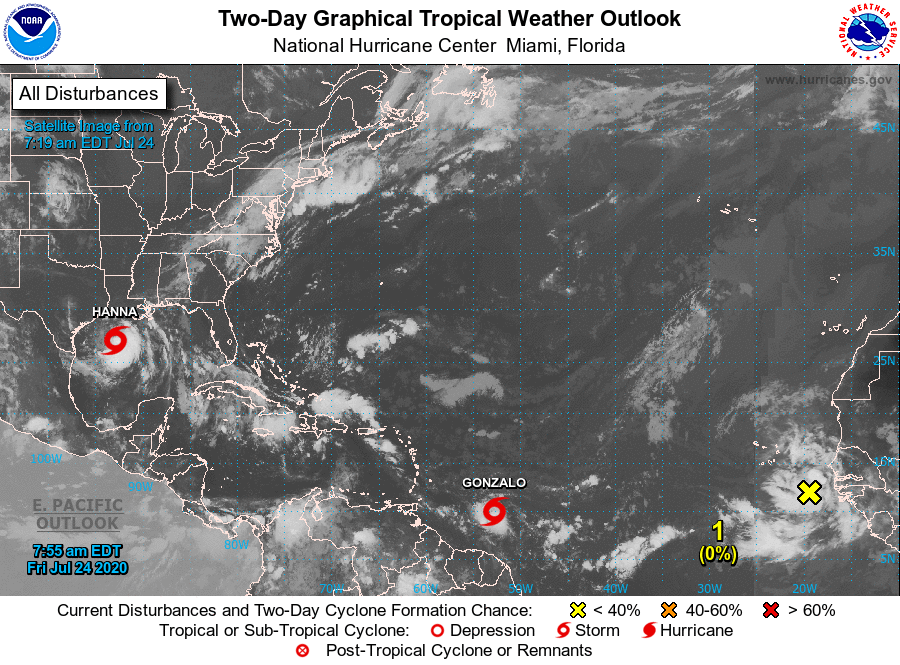 Elsewhere over the Atlantic basin on this Friday morning, a tropical wave is located about 300 miles southeast of the Cabo Verde Islands, producing an area of cloudiness and disorganized thunderstorms. The disturbance is expected to move westward across the tropical Atlantic during the next several days. Some gradual development of this system is possible by early next week when it reaches the western tropical Atlantic. It has a near zero chance of formation during the next 48 hours and a low (30 percent) chance during the next five days. 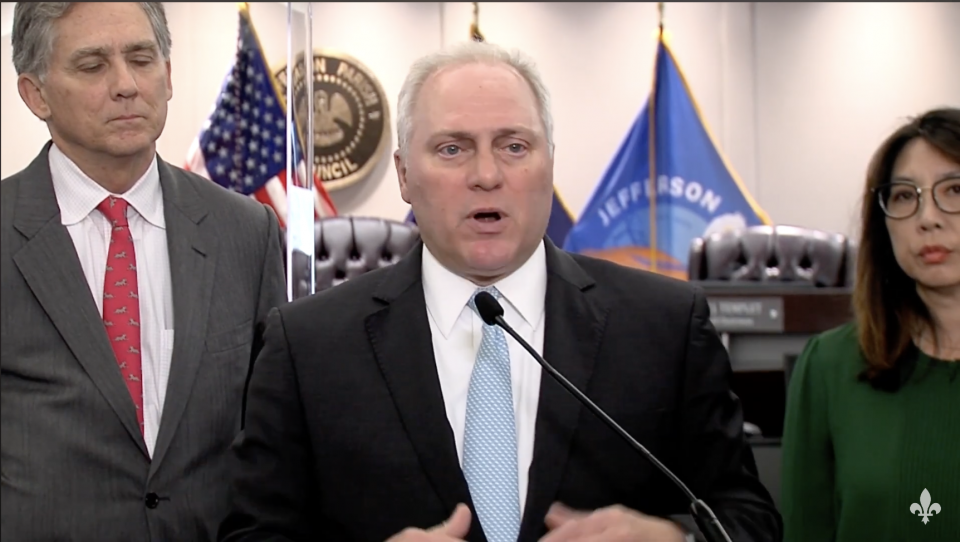