2 wins away from the Dome 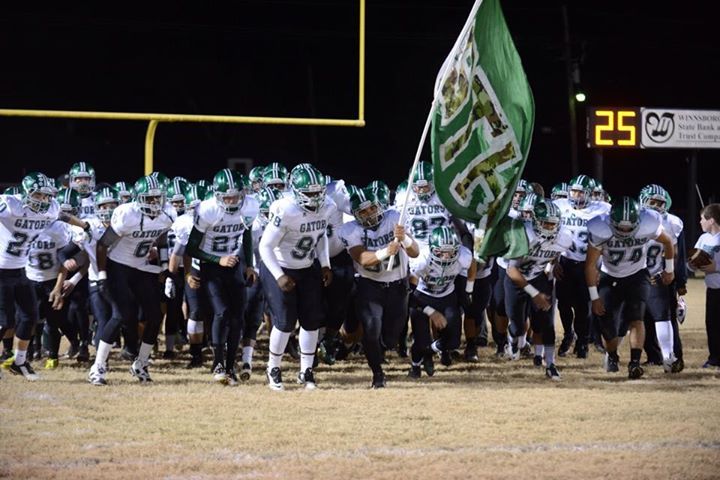 The South Terrebonne football team won again on Friday night, advancing to the LHSAA Class 4A State Quarterfinals with a comeback 24-15 win against Franklin Parish.

Next on the Gators’ plate will be a post-Thanksgiving date with the No. 1 team in the state.

Thanks to a dominant defensive effort, South Terrebonne rallied from a 15-7 halftime deficit, controlling the entire second half of Friday’s road game to secure a fairly comfortable road playoff win.

Up next for South Terrebonne will be a road date with No. 1 Plaquemines – an 11-1 mean machine that rolled into the Quarters with a 43-28 win against Lutcher.

Gators’ coach Richard Curlin said he’s proud of his team’s effort, touting that it took a total team effort to stave off the Northern Louisiana-based foe to earn the right to play Thanksgiving-week football.

“That’ll test your team – going on the road in somebody else’s place, taking a fairly long trip and then falling behind early and having to overcome it,” Curlin said. “To be in that situation and to not panic – that says a lot about us. We’re awfully happy to be where we are right now.”

A couple of special teams mishaps dug the Gators into an early hole. After a back-and-forth first quarter of action, the Patriots struck first in the final minute of the first when South Terrebonne snapped the ball over punter Chris Benoit’s head, giving Franklin Parish the ball in prime real estate inside the Gators’ 3-yard-line.

One play later, that good field position turned into a two-yard touchdown run by DeAndre McCarthy to give the Patriots an early 7-0 lead.

South Terrebonne fired back from its mistake, driving down the field in 13 plays to tie the game at 7 – a touchdown drive capped by a seven-yard run from halfback Cristian Wallis, who had 186 yards and two touchdowns in the win.

On the ensuing kickoff, the Gators’ special teams woes returned, as sophomore K.J. Johnson broke free and took the ball 83 yards to the house. After a successful 2-point conversion, the Patriots were ahead 15-7 – a lead that held until halftime.

“Our defense was great the entire game,” Curlin said. “They had 15 points, but it was really a lot of our own doing with the special teams plays. I think our offensive and defensive lines were the story. I think those two things have been the story of the season for us. Once we settled down and relaxed a little bit, those guys controlled the game.”

The second half was all South Terrebonne.

Out of the lockers, the Gators’ defense dominated the final 24 minutes, holding the Patriots to -13 total yards in the second half.

With possession of the ball, the Gators took control in the third quarter on touchdown runs from both Wallis and quarterback Tyeson Verdin to go up 21-15.

With the Patriots unable to move the football, the Gators put the icing on the cake in the fourth, banging home a 22-yard field goal late in the game to take a two-score, nine-point lead – a margin that held for the rest of the game.

The Gators outgained Franklin Parish 300-40 on the night, running 58 plays compared to 34 for Franklin Parish, who beat Bastrop in the opening round of the playoffs.

“That’s a good team. When we saw we’d have to play Franklin Parish and not Bastrop, frankly, we’d have preferred to play Bastrop,” Curlin said. “Franklin Parish runs the Wing-T like we do, so they certainly know a lot about the offense and everything that we do. They had a good scheme against us. It took us a little while to get something going.”

With the win, the Gators will now travel to play Plaquemines – one of the teams to beat in Class 4A. Curlin said on Saturday night that he hadn’t yet seen much film on his opponent, adding that he knows South Terrebonne will have a fight on its hands in the quest to reach the Semifinals.

“We don’t know too much – the film we’ve seen, they weren’t facing offenses like we run, so we’re not quite sure how they’ll line up against us,” Curlin said. “But we know they’re a heck of a team that’s well coached. We know we’re going to have to play well.”

ELSEWHERE IN THE HOUMA-THIBODAUX AREA

In Class 5A, powerful Thibodaux was upset by Scotlandville 27-15 – a game that simply saw the Tigers run out of time after digging a first half hole.

Scotlandville stormed out of the gates, taking a 14-0 lead six minutes into the game. That lead ballooned to 21-0 early in the second quarter on a fourth down touchdown strike.

Down 21 points, Thibodaux regrouped and controlled the final 35 minutes of the game, but the early hole was just too deep for the Tigers to seriously threaten victory.

Thibodaux fired out of the locker room and scored nine-straight to make the game 21-9 mid-way through the third quarter. After a Scotlandville touchdown made it 27-9, Thibodaux fought back again on a one-yard run from halfback Jayquan Chenier to send the game to the fourth quarter at 27-15.

In the final quarter, Thibodaux had a few chances to cut the lead further, but the Tigers could never quite push forward. Scotlandville salted away the clock whenever it had the chance, crippling any chances for a comeback.

The loss ends Thibodaux’s season with a 10-2 record.

While Thibodaux struggled early and rallied late, E.D. White didn’t have as much luck, falling 41-7 to Notre Dame.

The Cardinals trailed 34-0 at halftime and 41-0 through three quarters in a game that Notre Dame controlled up front.

The South Terrebonne football team takes the field loud and proud before Friday night’s game against Franklin Parish. The Gators rallied from an eight-point halftime hole, scoring a 24-15 win. Next up is a date with Plaquemines – the No. 1 team in Class 4A.