Movin’ on Up! Renovations, court declaration coming to Stopher Gym 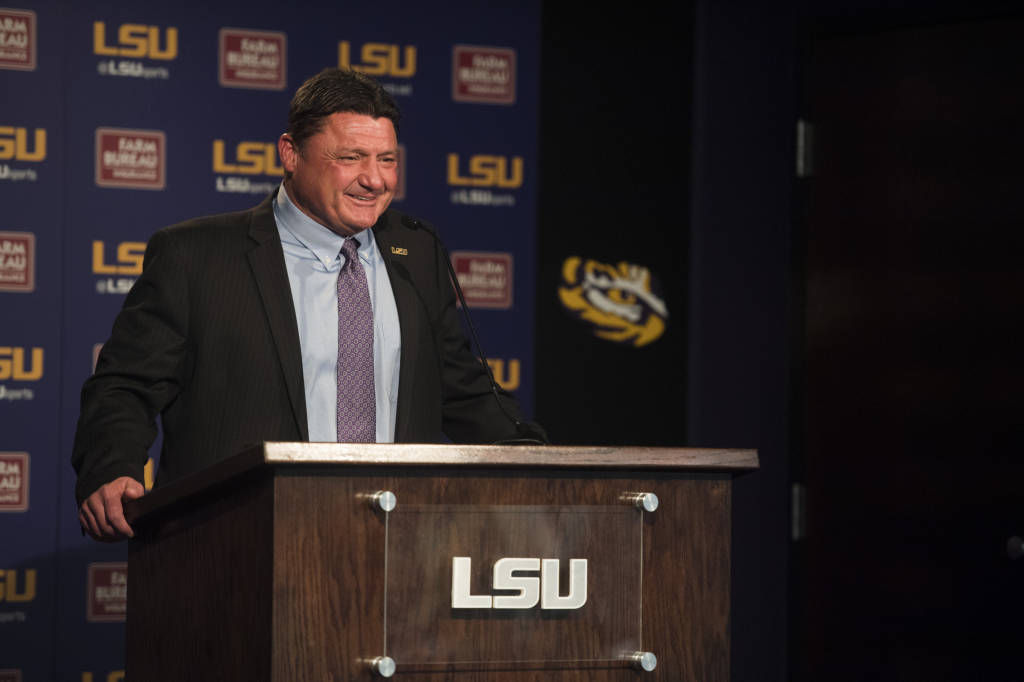 I try to avoid making rash judgments or forming ill-advised opinions about things I love.

So for that reason, I waited until Saturday night at 11 p.m. to start writing this column about the 2017 LSU football season – a year which had ended dramatically last Monday on New Year’s Day at the hands of Notre Dame in the Citrus Bowl.

The LSU season had some bad moments, some good moments and some ugly moments – there’s no doubt about that.

The future of the Tigers is not as rosy as the Coach O-loving people of this part of Louisiana make it out to be, but it’s also not as bleak as the Coach O-hating fans closer to Baton Rouge think it is, either.

The truth lies somewhere in the middle, and I think it’s closer to being really good than really bad.

In 2017, LSU had a roster devoid of depth and lacking high-end talent.

Fans love Les Miles, but the truth hurts: He left LSU’s program with far less talent than when he inherited it.

In the trenches, the Tigers were bare bones in 2017 and after a few injuries, they were bitten down to their core.

There’s nothing Coach O can do about that. That’s the hand he was dealt and the Tigers played it about as well as they could have – given the circumstances.

That’s a plus for Coach O.

But LSU’s offense didn’t get better under offensive coordinator Matt Canada, who is already gone from the program after just one season.

The Tigers squeezed a lot out of quarterback Danny Etling in 2017, guiding him to a 16-touchdown, 2-interception season.

But Etling was severely limited, missing open throws and taking untimely sacks. Canada’s shifts, motions, gizmos and gadgets worked on some teams, but didn’t on others and there was a clear disconnect between he and Orgeron throughout the season – so much so that the offensive coordinator agreed to waive some of his buyout to leave the team.

My feeling is this: Orgeron has said his entire tenure that he wants an offense that looks like the golden days USC offenses of the past with Matt Leinart, Reggie Bush and the gang.

If that’s the case, why hire Canada at all? I am a college football junkie, so I actually had watched a lot of Canada at NC-State and Pittsburgh before getting to LSU.

I knew coming in that the Matt Canada offense was finesse-based and heavy on trickery and alignment adjustments and shifts.

If I knew that, how could Coach O not?

That’s a negative for the LSU coach.

That’s a no-no in Baton Rouge.

But unlike LSU teams of the past, the Tigers played for pride late in the season and rattled off wins over several rival opponents after losing to Alabama – the second-straight year that Orgeron guides the Tigers to a successful month to finish the year after losing to the Crimson Tide.

What’s also promising is what’s happening on the recruiting trail – the Tigers are crushing it.

Sure, you won’t hear about LSU’s recruiting successes on TV or on the message boards because college football fans are so enslaved by star numbers and team rankings that they sometimes forget that the purpose of recruiting is to fill needs and create a successful football team.

This LSU recruiting class will not be No. 1 in the country. It will hover somewhere just inside the Top 10, assuming the Tigers finish strong.

But despite other teams owning some flashier picks, the Tigers have filled needs on the recruiting trail – filling the areas of the cupboard that needed filling.

The Tigers loaded up on lineman – taking several guards and tackles on the offensive side of the ball and a plethora of rush-ends and nose guards on defense.

How many of those guys develop into future All-SEC players, no one is yet sure. But to have depth and the ability to rotation guys in and out throughout the game in the future is huge in the SEC and it’s something LSU couldn’t do at all in 2017.

LSU also got a transfer kicker – the No. 1 player in the country at the position. That should eliminate the ill-advised and untimely misses the team had to endure literally all season.

So now, we go toward the offseason and there are still plenty questions which lie ahead.

Will Orgeron make good on his second stab at hiring an offensive coordinator?

Can the new offensive mind work with freshman quarterbacks Myles Brennan and Lowell Narcisse and polish their games?

Can LSU fix their putrid special teams and win a few games on that side of the ball, as opposed to losing them?

Can the Tigers overcome a brutally tough first month of the season and stay afloat for league play?

There’s a lot of unanswered questions, but I think the Tigers are closer than some people would like to think that they are.

But make no mistake about it – 2018 is a huge year for both this program and for Coach O’s future.

Either way, at this time next year, we will have a really clear idea about where things are headed – for better or for worse.