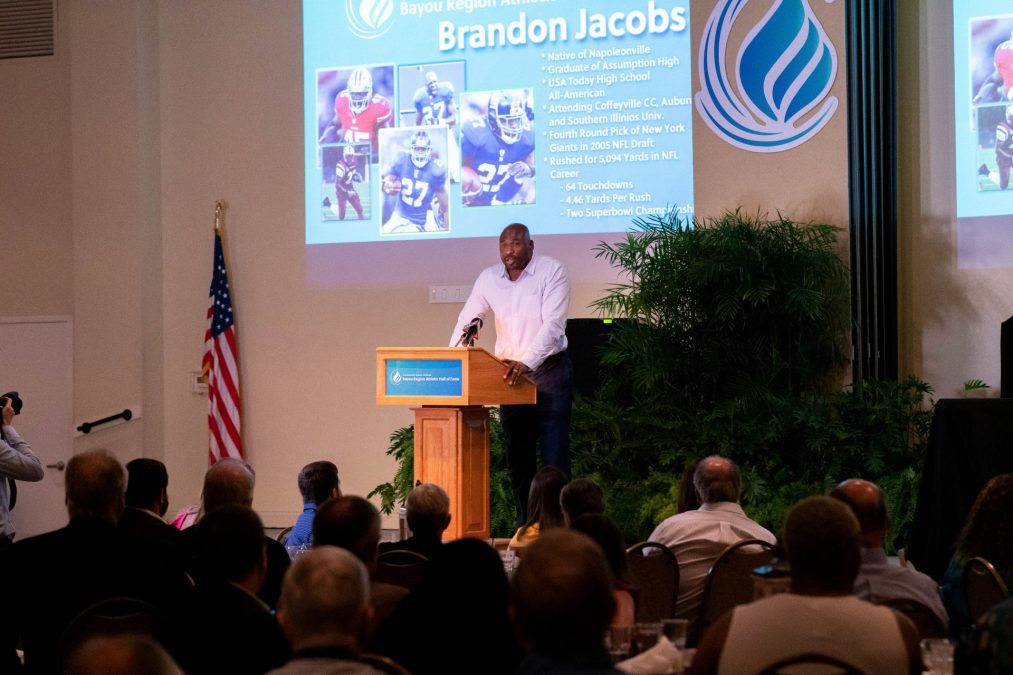 First to be recognized was Houma native Richie Cunningham. After playing baseball and football at Terrebonne High School, Cunningham continued his athletic journey at the University of Louisiana at Lafayette. The prolific kicker scored 70 points for the Ragin’ Cajuns.

He signed as a free agent with the NFL’s Dallas Cowboys in 1994 but failed to make the final cut his first go-round. However, he got his shot in the regular season with the team in 1997, the same year he made the NFL All-Pro team, sending 34 out of 37 footballs through the uprights — which led the league. The following season, Cunningham set the franchise record for the longest field goal, a 54-yarder. He also converted 29 of 35 attempts that same year. Following his stint with the Carolina Panthers, when he set the franchise record for most extra points in a game, he finished his NFL career with the Jacksonville Jaguars in 2002. 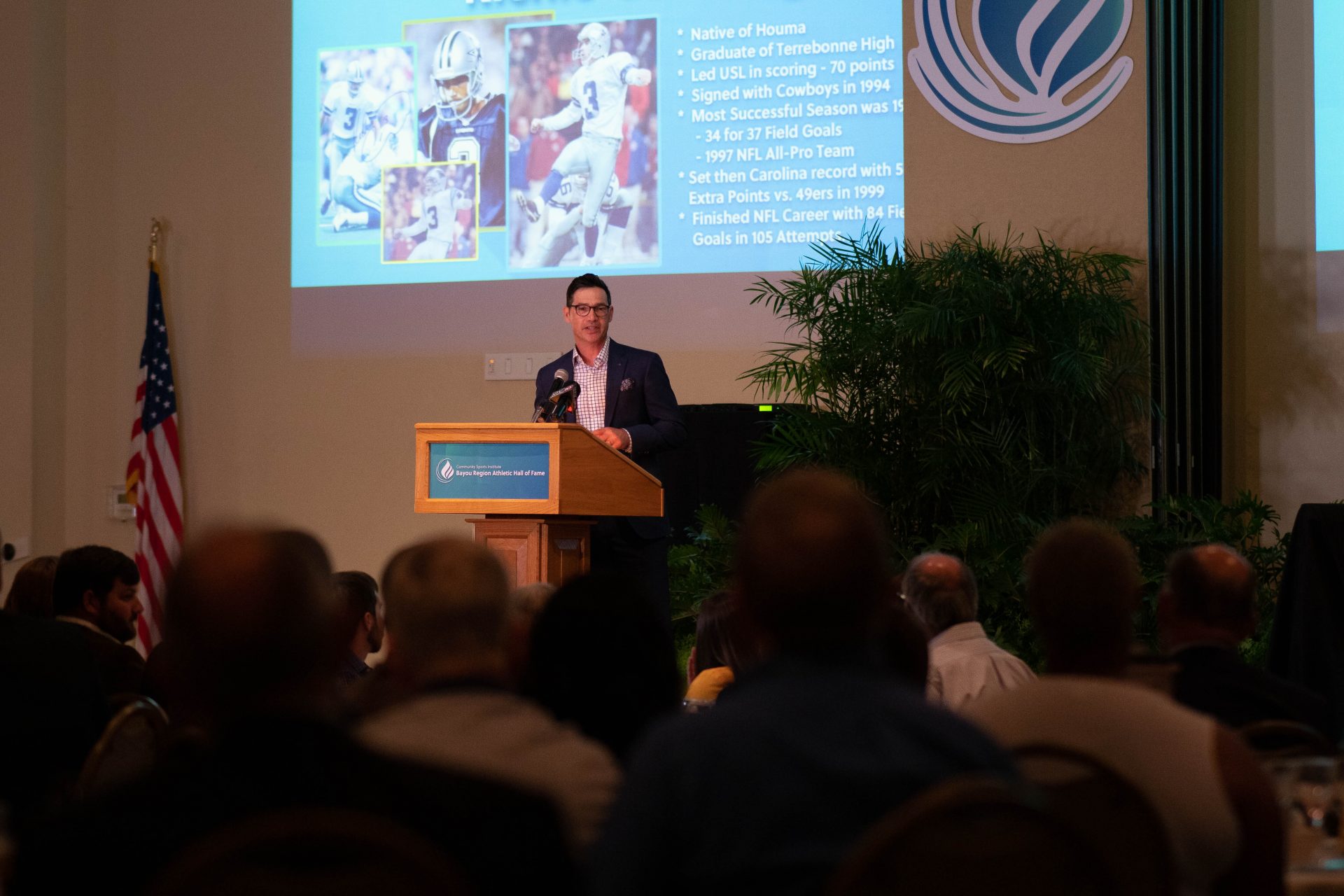 JaJuan Dawson, a Gibson native, was honored next. Making a name for himself on the football field at H.L. Bourgeois High School, the multi-talented athlete played quarterback, running back and defensive back for the Braves. But he ended receiving a scholarship to play wide receiver at Tulane University.

At Tulane, he broke several records. The star athlete hauled in 234 receptions for 31 touchdowns and 3,084 yards. During his time there, the Green Wave had one of their most successful periods, which included the 1998 undefeated season.

The Cleveland Browns drafted Dawson in the third round of the 2000 NFL Draft. He also played for the Houston Texans. He finished his career in the league totaling 52 catches for 664 yards and two touchdowns.

With a business management and marketing degree from Tulane, Dawson took his talents to the medical sales field. 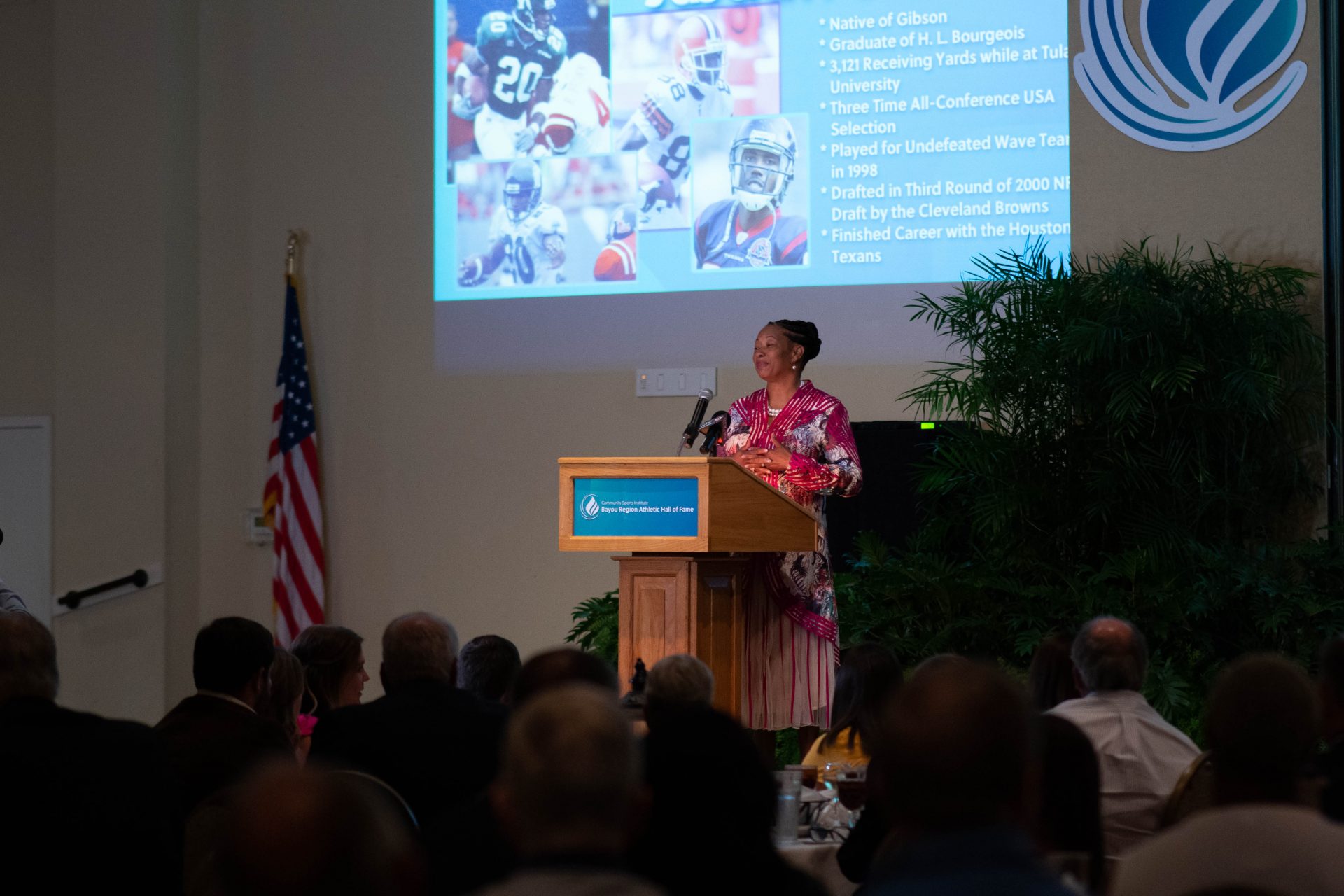 The husband and father of two tragically passed away at age 37 on July 12, 2015, while on a boating trip with his family at Lavon Lake, Texas. His mother, Susan Dawson, accepted the award on his behalf.

Sandy Fussell of Napoleonville was the third inductee to be applauded. After receiving a degree in education from Nicholls State Univerity, she returned to her alma mater, Assumption High School, where she headed up the volleyball program. From there, she went on to have an unrivaled coaching career. Under her 35 years of leadership, the Lady Mustangs garnered eight state championships, seven runner-up titles and 1,080 wins. From 1988 to 2000, they won 113 district matches in a row. She has 28 district titles under her belt, too. 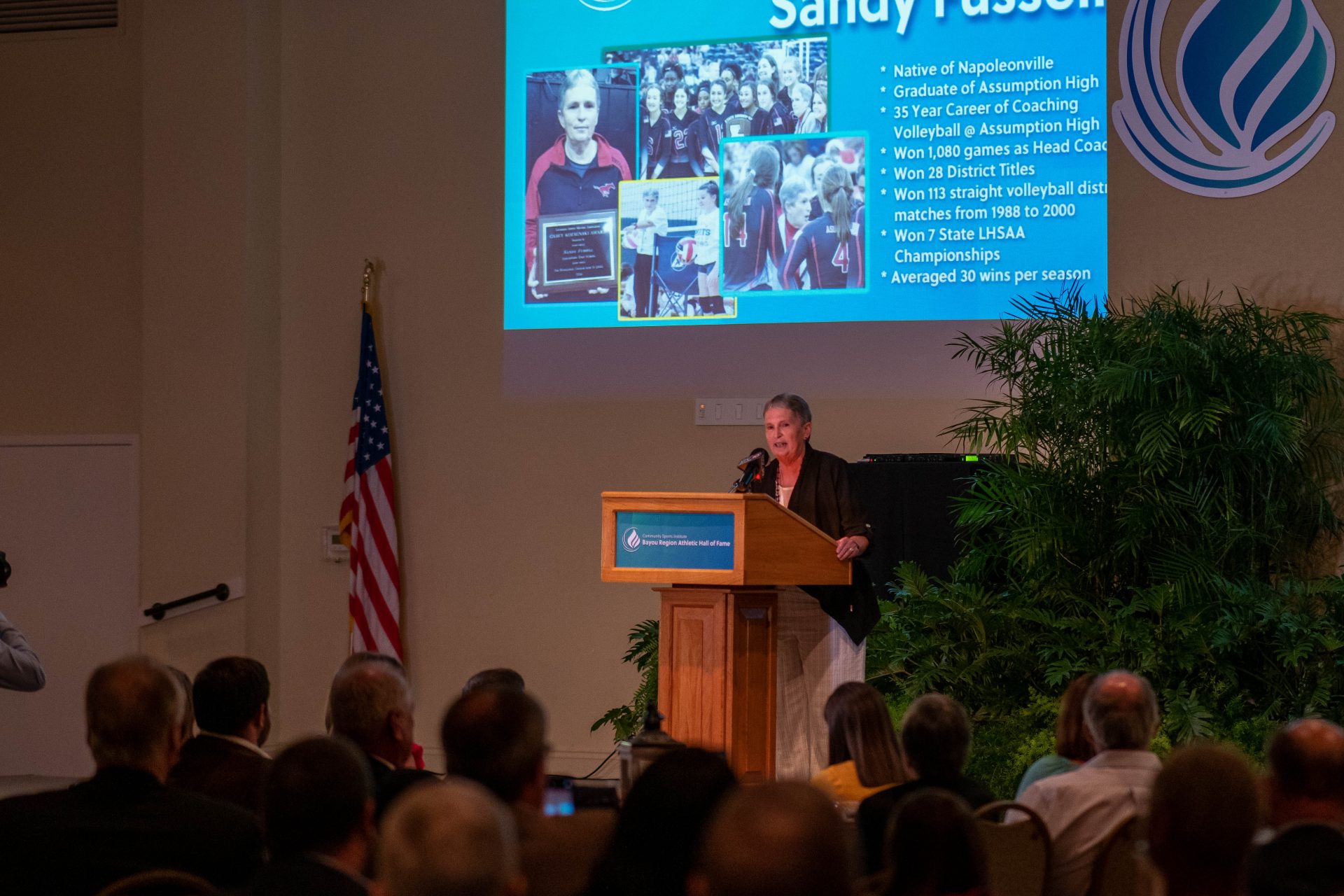 Fussell retired from high school teaching and coaching in 2016. However, she still coaches through local youth programs. 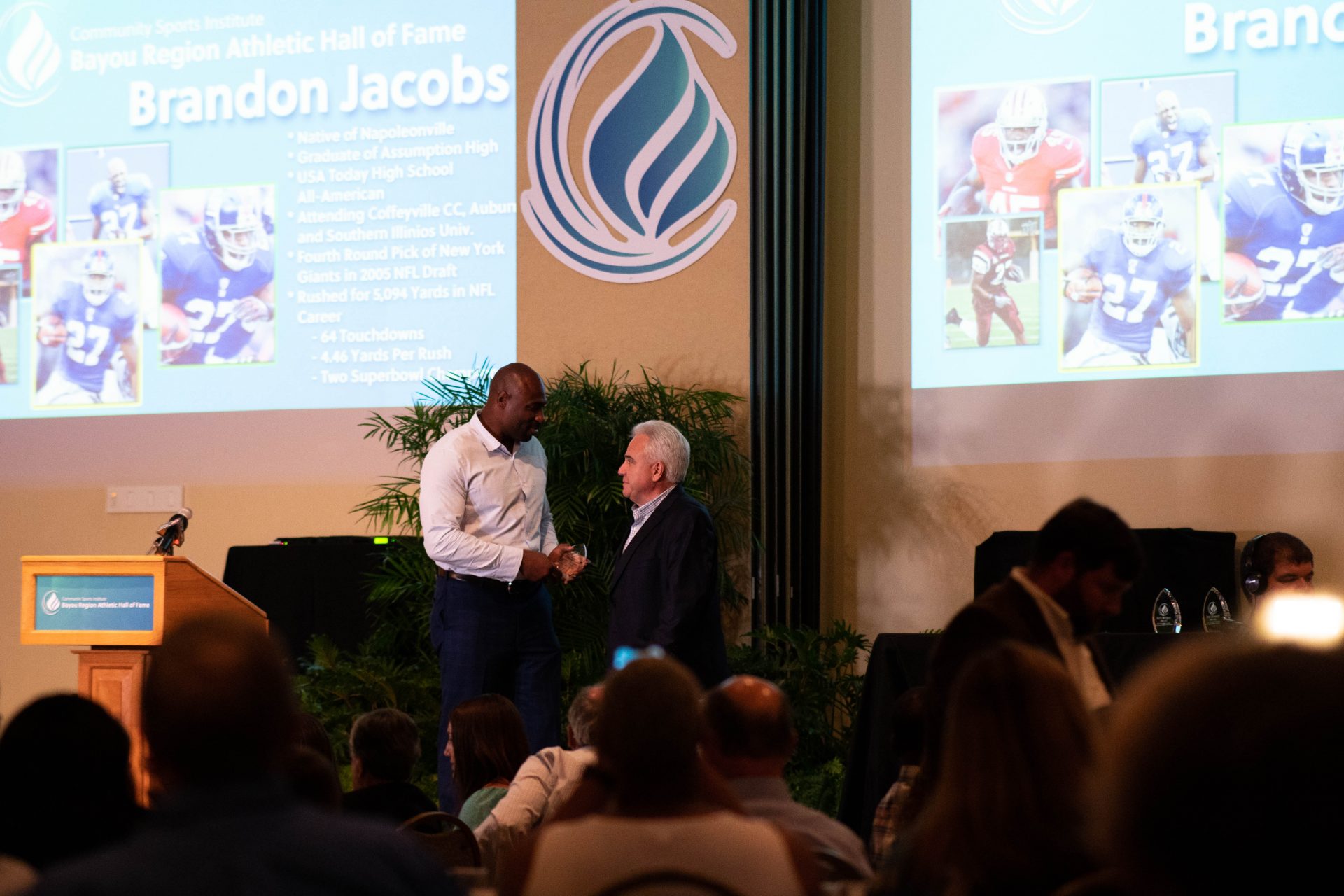 A name that may still instill fear in many former high school athletes in the Bayou Region, Napoleonville native Brandon Jacobs took the stage next as a 2021 inductee. An utterly dominant force, opposing teams would make sure to stock up on ice packs before facing the 6-foot-4, 250-plus pound running back. In his senior year of suiting up for Assumption High School, he was named the Louisiana 4-A Most Valuable Offensive Player after rushing for more than 3,000 yards and crossing the goal line 38 times that season. In addition, USA Today and Orlando Sentinel awarded him All-American Team honors.

Following high school, he continued running through defenders while playing for Coffeyville Community College, Auburn University and the University of Southern Illinois. He ran for over 4,500 yards and scored 58 touchdowns during his college years.

The New York Giants selected Jacobs in the 2005 NFL Draft. His success continued in the league, earning two Superbowl rings with the G-men. He played for New York from 2005-2011 and returned to the team in 2013 after a brief stint with the San Francisco 49ers. He holds the franchise record for most career rushing touchdowns and ranks fourth in career rushing yards for the team. 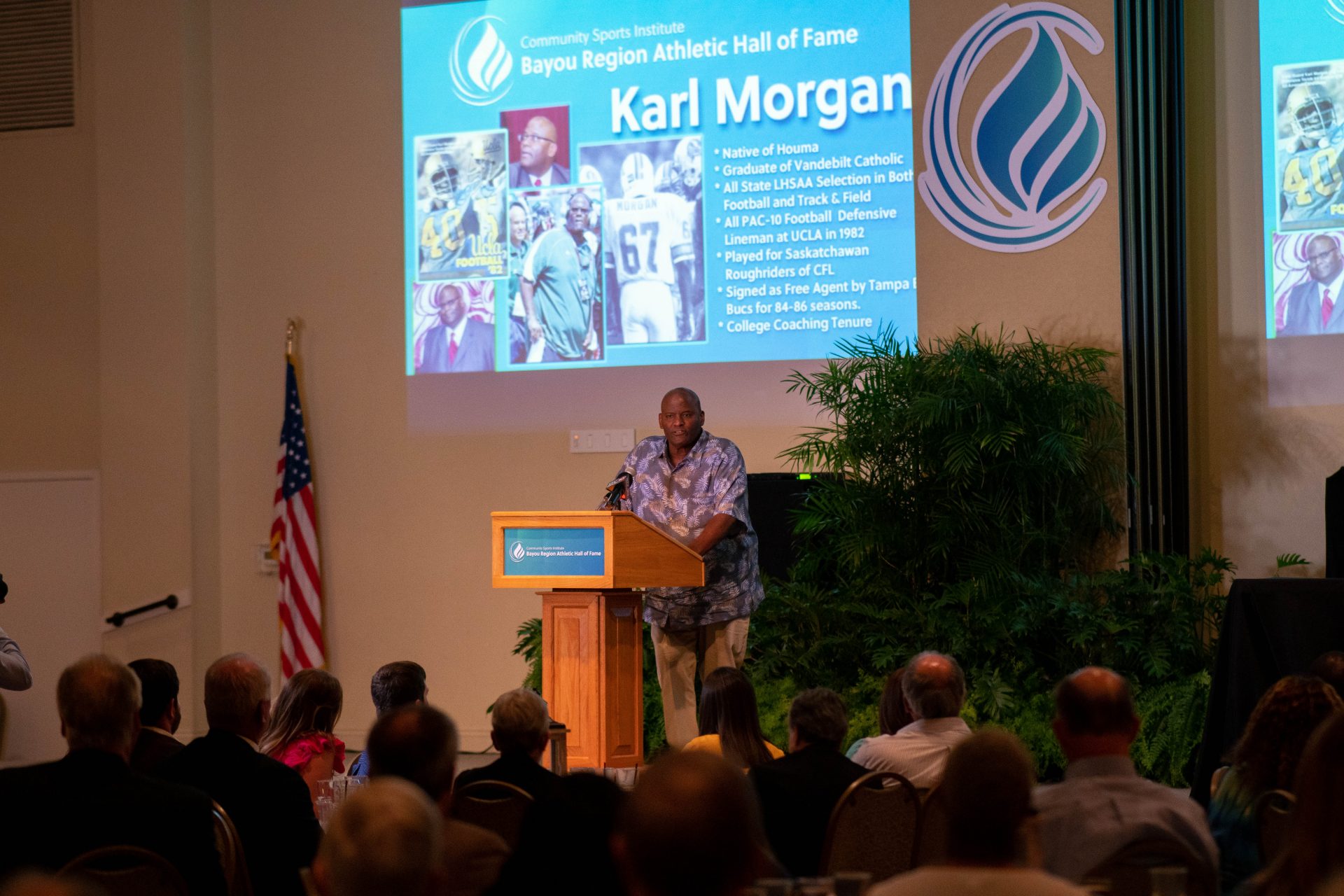 Houma native Karl Morgan, the fifth member inducted Thursday, was a standout in football and track and field at Vandebilt Catholic High School — earning All-Louisiana honors in both sports. He was offered an athletic scholarship by the University of California at Los Angeles (UCLA), where he was named to the All-Pac 10 team in 1982 as a defensive tackle.

After his college years, he signed on with the Saskatchewan Roughriders, a Canadian Football League team, before spending the 1984-1986 seasons with the NFL’s Tampa Bay Buccaneers.

After Morgan hung up his cleats, he moved on to coaching. He served as an assistant coach with Nicolls State University, Southern, Purdue and North Alabama, among several other programs. He was head coach of Mississippi Valley State (2010-2013) and then Coahoma Community College (2014-2015). 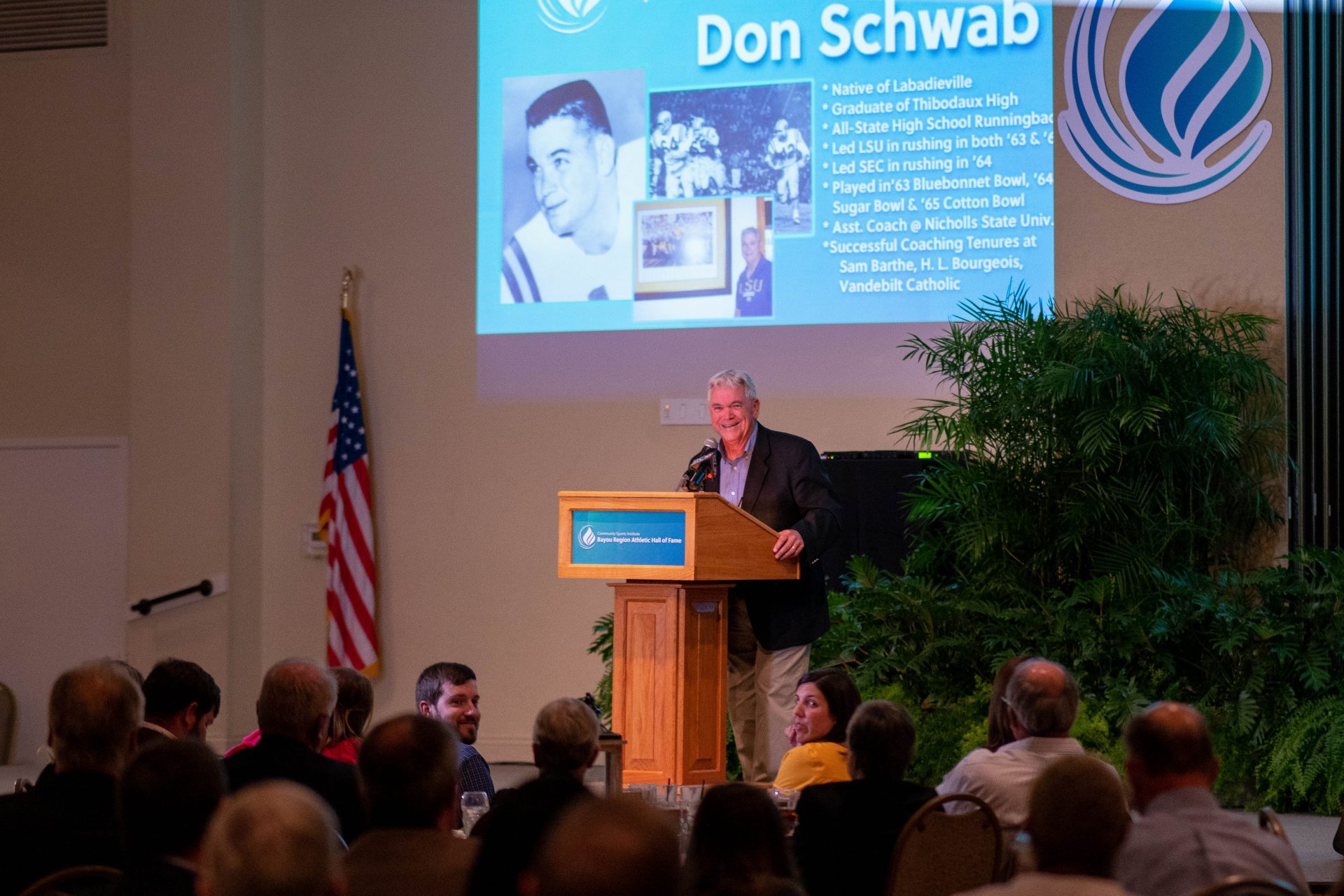 Don Schwab, a Labadieville native, rounded out the 2021 class. While at Thibodaux High School, the star football player was named Louisiana All-State Running Back.

His achievements on the gridiron led him to receive an athletic scholarship from Louisiana State University. Schwab, a fullback, led the Tigers in rushing in the 1963 and 1964 seasons. In the latter, he also led the Southeastern Conference with 683 yards. He rushed for 1,424 yards and eight touchdowns as a Tiger.

After LSU, Schwab found success as a football coach. He led Sam Barthe High School to the 1968 Class B Championship game and had impressive coaching stints at HLB and Vandebilt Catholic.

He garnered accolades off the field, too. After leaving the private sector, Schwab won the Terrebonne Parish President seat in 2004. He served the position from 2004 to 2008.

CLICK HERE to learn more about each of the 2021 inductees. 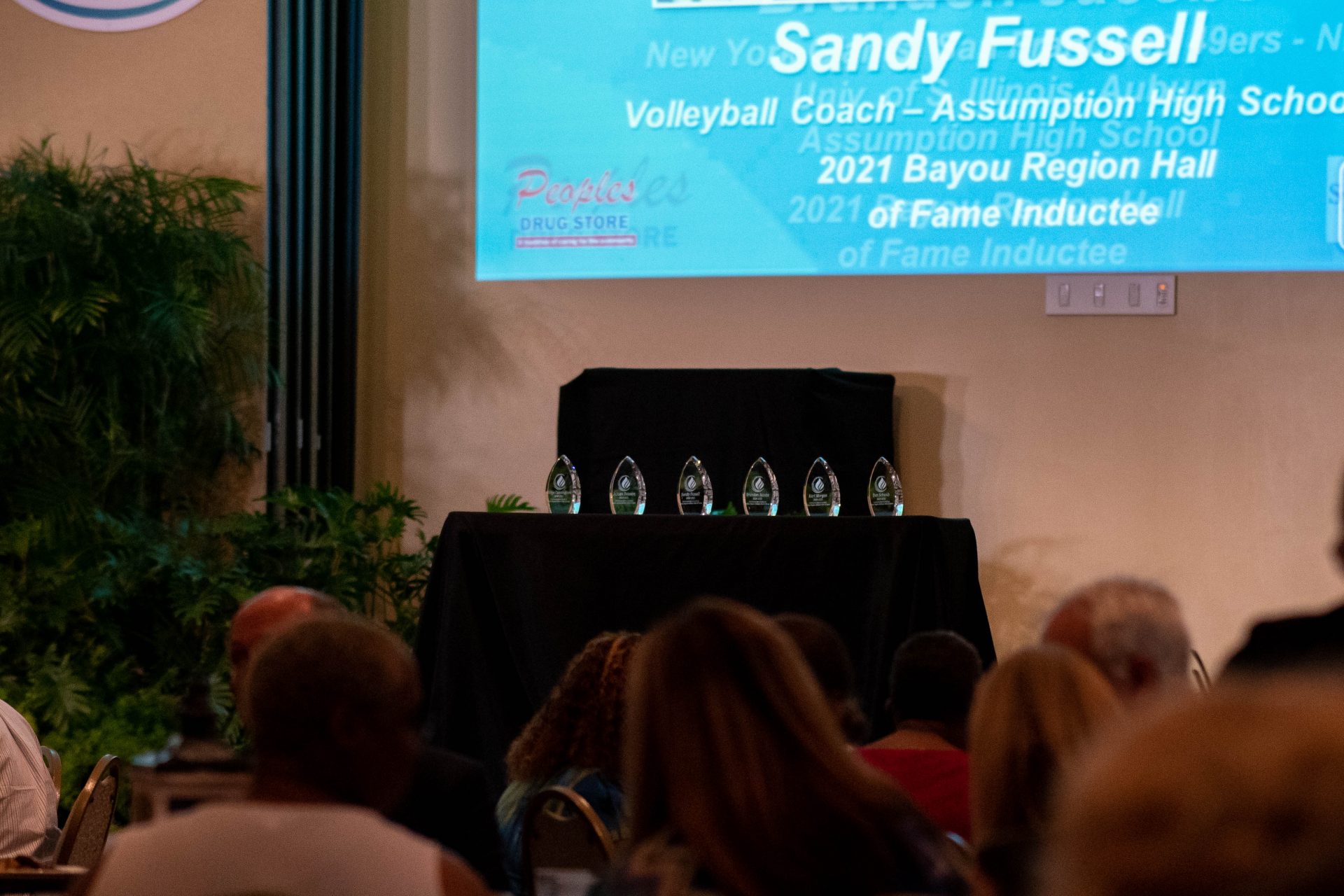