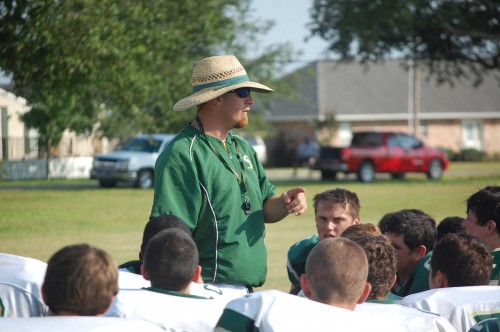 Central Lafourche High School head football coach Travis Douglas announced this week that he is resigning as the team’s coach.

Douglas, who completed just one year in his position, made the decision after accepting a job as the Trojans’ athletics director.

“I just thought it was going to be a really difficult thing for me to do if I were to do both,” Douglas said. “I just thought that for me to do both of them, one would have to suffer. You know? During football season, maybe some things would slip through the cracks or some things would go undone. And I definitely didn’t want to neglect one or the other. That’s not the right thing for the school.”

Douglas’ tenure as football coach was a rocky one in the standings.

Central Lafourche finished the 2011 season with just a 1-9 record, the lone win coming in the team’s fourth game against H.L. Bourgeois.

But the Trojans dealt with injuries and inexperience – both were factors in the team’s lack of wins.

“It’s been tough on the kids,” Douglas said during the middle of last season. “But we really believe we’re building this thing back up and have things pointed in the right direction.”

Douglas said his decision to step down as football coach had nothing to do with the first-year struggles, adding that becoming a head coach on the prep level was a dream come true and a time he will cherish forever.

“I had to look at it like this. I have three small kids at home and I mean, I coach my little boy’s baseball team,” Douglas said. “Wanting to do all of those things made me have to take everything in consideration. It was important for me to not just be selfish and be the head football coach and the athletic director, but to instead do what was best for the school.

“One of my dreams in life was to be a head football coach. And I was blessed with the opportunity to do it and I’m thankful for Central Lafourche for giving me the opportunity to be the head coach here. I never want to get away from the game of football.”

Douglas added that as athletic director, he will keep close tabs on the football team and will transition from coach to the team’s No. 1 fan.

He added that goal as athletics director will be to blossom the school’s talent and beef up the Trojans’ competitiveness in the Bayou District.

“Now, I’ll be able to do a little more to help out and be a part of all of the sports within the school,” Douglas said. “I really think I can help the school to become a better place being here in this role. I will try and help every sport the same way that I would have tried to help football when I was solely a part of that program.”

With his resignation finalized, Douglas’ first task as the Trojans’ athletics director will be to find his replacement.

The Lafourche Parish School Board has advertised the Trojans’ coaching vacancy online since Douglas stepped down – an application process that closed this past week.

The former coach said interest in the job has been very large.

“We’ve definitely had a lot of interest,” Douglas said. “Since day one when we posted the job on the Internet, we’ve had people call or email every day. I got an email today from a guy inquiring about the position. People are definitely interested in the job and want to be a part of it. It will be interesting to see when we get the package from the school board to find out exactly who did apply and who we’ll be picking from when we’re deciding who is the best fit.”

Douglas added that he doesn’t have a timetable as to when a hire would be formally announced. But he shared some insight into the type of candidate the school will hire.

“We want a guy who will run a disciplined program and someone who will keep things here moving forward.”