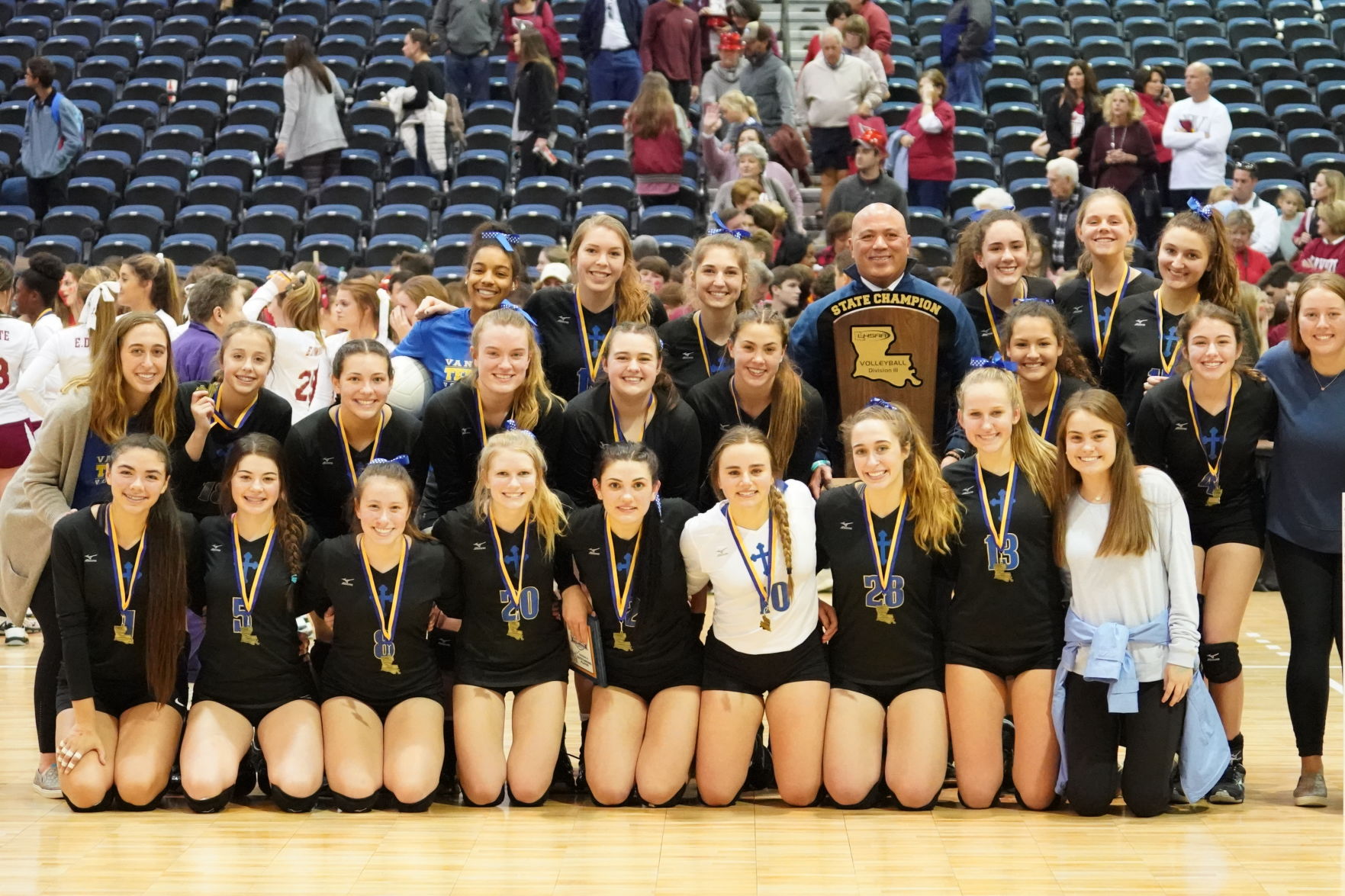 After that match, Vandebilt coach Greg Castillo said he challenged his team, telling them that they had to learn from the defeat and conquer those demons in the future.

Flash forward two years and it’s safe to say that the Lady Terriers took their coach’s words to heart.

Last year, they got back to the Pontchartrain Center and won State.

This year, they did it again — even with virtually a brand new cast of characters on the floor.

Vandebilt played beautifully at the State Tournament this past week, cruising past Ursuline Academy in the Quarterfinals on Thursday, before beating De La Salle in a five-set thriller on Friday.

The climax came on Saturday afternoon against rival E.D. White — a team that had beaten Vandebilt earlier in the season.

Junior Brittany Theriot was flawless throughout the tournament, posting more than 20 kills in the Championship Match to earn Most Outstanding Player honors in Division III.

Castillo told The Times at TGMC Preseason Media Day this fall that he believed in this year’s team, despite its youth. The Lady Terriers returned just one primary player from last year’s title-winning team.

But the youth didn’t show late in the year, as the Lady Terriers ended the season with 11-straight wins, then soared through the State Tournament.

“I believe in these kids. It was about them believing in themselves,” Castillo said at Media Day. “We have no doubt that they can reach the highest level and go beyond it. The talent is there.”

That was on full display at the Pontchartrain Center.

The Lady Terriers cruised for three of the four sets against the Lady Cardinals, the only hiccup coming in the second set when the Lady Cardinals took advantage of Vandebilt unforced errors and earned the set.

But after that, Vandebilt took control. With Angelle Buquet setting the ball, Theriot and other outside hitters killing it and Lauren Fitch and Annelise Henry working hard defensively, the Lady Terriers played the match at their pace and kept E.D. White off balance.

Castillo said he had no doubt that his team was OK after the second-set loss because he’s seen his team rally from adversity throughout the season — and also 24 hours before winning the title.

On Friday, Vandebilt was pushed to its brink against De La Salle — arguably the match of the tournament. The Lady Cavaliers won the first set against Vandebilt, then also the third, forcing the Lady Terriers to either win two-straight sets or go home without the title.

But Vandebilt stayed calm, winning the fourth set 25-19 before pushing past De La Salle in a dominant fifth-set rally to secure the win, setting the stage for the matchup with E.D. White.

The Lady Cardinals were also in a five-set thriller in the semifinals with St. Michael the Archangel, winning the first, third and fifth sets to secure a spot in the finals.

On the final rally of the match, Vandebilt secured the match after a short rally. The decisive blow was a block at the net by Madeline Benoit, which sent the crowd into a frenzy, as the Lady Terriers stormed the floor.

OTHER LOCALS PLAY AT STATE TOURNAMENT

Division III certainly had some Houma-Thibodaux flare with both Vandebilt and E.D. White making it to the State Championship Match.

But they weren’t the only locals who made it to the State Tournament.

In Division I, H.L. Bourgeois made it to the State Quarterfinals on a Cinderella-like playoff surge. The Lady Braves were the No. 24-seed in the 32-team playoff bracket. But they scored two upsets — against No. 9 Baton Rouge, then No. 8 East Ascension — to make the Quarterfinals.

The magical ride ended on Thursday night in a straight-sets loss against Mount Carmel, who went on to win the State Championship.

The Lady Braves are youthful and return several contributors from this year’s team. Coach Peter Verret said the experience of going to the Pontchartrain Center this fall will help the team next season.

In Division II, South Lafourche made the State Quarterfinals after trumping Landry-Walker and Lakeshore in the first two rounds.

But in the Quarterfinals, the Lady Tarpons were outclassed by Ben Franklin, falling in straight sets.

The loss ends the most successful senior class in Lady Tarpons history — a group that contains several All-District players.