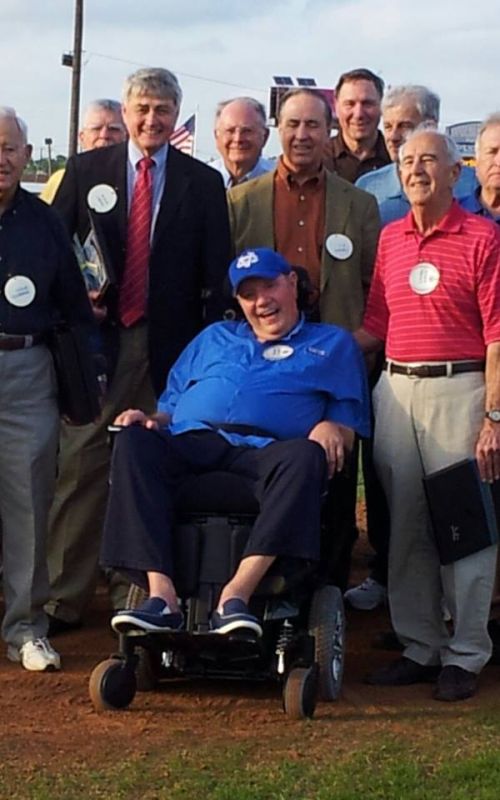 Vandebilt Catholic baseball coach Corey Sullivan knew there was a lot of history and tradition at his school that hadn’t been recognized in a long time.

So when Sullivan took over as the Terriers’ head coach midway through the 2012 season, he wanted to do something to honor that tradition and bring the Vandebilt baseball community young and old together in a big way.

With some help from the school, Sullivan got his wish recently when Vandebilt Catholic paid tribute to over 40 members from its 11 championship baseball teams between the years 1953 and ‘71 with an on-field ceremony and reunion at Terrier Field on Tuesday, April 1.

The ceremony, which took place before a game between Sullivan’s Terriers and District 7-4A rival Ellender, honored players from those championship teams as well as their respective coaches Buddy Marcello, Leslie Daigle and Bryan Gueniot.

“I just thought the younger guys needed to see that there is a lot of tradition and a legacy at Vandebilt, and it hadn’t been recognized in over 20 years,” Sullivan said. “It was good for the kids to see it.”

According to Beth Larke, the school’s alumni director, the event took a good deal of time and research to plan. But the responses Larke received were all positive, she said.

“It started with names and addresses,” said Larke. “I would say a good 50 to 60 percent of the players still live in the area, but not everyone is listed. We did a lot of White Pages and Google (searching). The responses were wonderful. Everyone knew the history of the school for baseball. It was outstanding.”

Regina Thibodeaux, who helped organize the event, said she could tell how ecstatic the former players were about getting together again.

“They were telling stories and reminiscing and really reconnecting,” she said. “You could just hear the happiness in their voice and how much they appreciated that Coach Sullivan and Vandebilt was recognizing them, honoring them and bringing them together.”

Many of the players on hand for the event were part of some of the earliest championship teams in the school’s history — back when it was known as St. Francis de Sales High (the school’s name wasn’t changed to Vandebilt Catholic until the late 60s).

One player in particular had his accomplishments highlighted during the ceremony: former pitcher Harold Haydel, the school’s only alumnus to play at the Major League level.

Haydel was a member of the 1959, ’61 and ’62 state championship teams at St. Francis and made his big league debut with the Minnesota Twins in 1970. While he spent a good part of the 1971 season pitching for the Twins, it is his Major League debut that Haydel remembers most.

In that debut, Haydel got a chance to bat against famed pitcher Al Downing and proceeded to hit a home run and a double in his first two plate appearances.

“When you are a pitcher, and you hit the ball like I hit it that day, that’s all you remember,” said the 69-year-old Haydel. “You don’t remember too much about your pitching. But being in the big leagues was a great accomplishment and I felt chosen to be one of those guys to play Major League Baseball.”

Haydel said he was thrilled the school wanted to honor him and others that helped shape St. Francis/Vandebilt into a baseball power.

“(Initially) I didn’t know if I wanted to go out there,” he said. “But I figured I might as well go out and see all the guys that I played ball with. It was a wonderful experience and I’m very honored and humbled to get that recognition.”

For others, the ceremony was enough just to see players they grew up watching and idolizing.

Mike Fakier was the shortstop on Vandebilt’s 1971 championship team, and while he stays in touch with the members of that group, he has a fondness for those who preceded him and helped lay the groundwork for success at the school.

“I was as excited about getting together with some of the older teams as I was with my own teammates,” said Fakier. “To see the guys we grew up aspiring to play like was really a thrill. I had as much fun watching those gentlemen get their tributes as I did walking out there myself.”

Sullivan said the players on his team were receptive to meeting those such as Fakier, Haydel and others who played the game before them.

“The younger guys got a chance to talk to them a little bit,” he said, adding, “When the older guys first came in, they were joking and some of them hadn’t seen each other in a long time. It was just phenomenal to see.”

Sullivan said there could be plans to recognize more players from the school’s past at future events.

There is talk of honoring players from some of the school’s State runner-up teams, as well as getting players from more recent Terrier teams together for an Old Timers Game.

The same night Vandebilt paid homage to its history, the Terriers lost, 10-2, to Ellender.

Members of Vandebilt Catholic High School’s 11 state championship teams pose for a photo during a game on April 1. The Terriers honored their great former players as a way to show respect to the team’s rich history.