NSU brings in locals in 2013 class 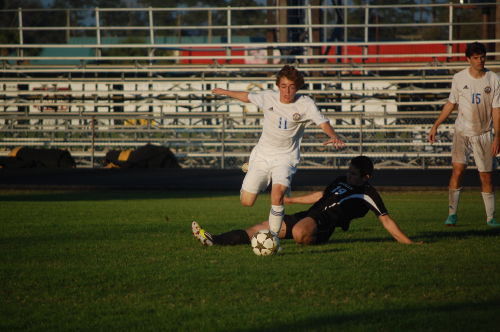 The Vandebilt boys’ soccer team is peaking at the right time.

After their latest performance, the Terriers are just two wins short of a state title.

Playing against one of the best teams in Louisiana, the No. 6-seeded Terriers put forth arguably their best performance of the season, upsetting home-standing No. 3 Teurlings Catholic 1-0.

The win marks the eighth-straight for Vandebilt, who appears to be peaking at the right time after a rough and tumble regular season.

Saturday evening’s match carried just a 1-0 tally on the scoreboard. But it was much more lopsided than the final score indicates.

Kelso said Vandebilt controlled possession throughout the match and was continually rocketing shots at the Teurlings Catholic defense.

“We really kind of dominated the game,” Kelso said. “We got one, but it could have been five, really. We had a lot of chances.”

The Terriers’ lone goal came in the 16th minute when Seth Miller drilled the ball into the goal.

Kelso said Miller’s goal is a testament to the team’s newfound balance.

After struggling to score for a large part of the season, the Terriers’ offense is now peaking.

“We have multiple players who are scoring now,” Kelso said. “That’s a great thing for us because we obviously didn’t have it that way all season.”

With the lead in hand, Kelso and the Terriers shifted into a more defensive alignment in the second half.

That allowed Vandebilt to put the finishing touches on the victory and push the team into the semifinals.

“We just kept persevering and we kept taking it to them,” Kelso said. “In the second half, we dropped back and played more defensively, but we held on and got out of there with a win.

“I couldn’t be prouder of how much effort the boys put forth to get this accomplished.”

With the road win, Vandebilt will now return home for the semifinals – regardless of who won Monday’s match between No. 7 Bolton and No. 2 St. Louis.

The teams met Monday night with a score not available at press time.

The Division II bracket is seemingly up for grabs with the Terriers’ victory over the No. 3 seed, combined with No. 16 East Jefferson’s upset win over No. 1 Alexandria.

“Anyone can win it this year,” Kelso said. “There’s a lot of parity in Division II this year. You look at these matches and they are all tough, close matches.

“But we like where we stand. We’re playing our best soccer right now. Absolutely.”

While Vandebilt’s boys’ were pulling a road upset, the No. 1-seeded Lady Terriers were flexing their muscles in a 4-1 drumming of No. 9 Pearl River in the quarterfinals on Saturday night.

Vandebilt didn’t waste any time in Saturday’s victory, earning three first-half goals to take the drama out of the match.

With the big lead in hand, the Lady Terriers split the second half with Pearl River, swapping goals with the No. 9-seeded opponent.

Senior Makelle Pena scored two goals for Vandebilt in the win. Whitney Champagne and Grace Champagne added one a piece to round out the scoring.

Like the boys, Vandebilt’s girls will also vie for a spot in the finals from the comforts of home.

The Lady Terriers will host No. 5 Lutcher in the semifinals. A time and date for that match was not available at press time.

Lutcher earned its way into the Final Four with a 1-0 road win against Neville.

Vandebilt beat their semifinal opponent 5-0 in a match played on Jan. 7.

While Vandbilt’s squads worked their way into the semifinals, E.D. White’s boys’ awaited their fate.

The No. 5 Cardinals earned their way into the quarterfinals this week after a 1-0 win against DeRidder.

With that win, the Cardinals moved on to play a road match against No. 4 Beau Chene on Mardi Gras Day with no score available at press time.

Vandebilt Catholic soccer player Seth Miller dribbles past a sliding defender during the Terriers’ 4-1 victory against Neville this past Thursday. Vandebilt is moving on to the semifinals after a 1-0 win against Teurlings Catholic. They are one of three local teams who remain in the playoffs. They are joined by Vandebilt’s girls’ team and E.D. White’s boys.