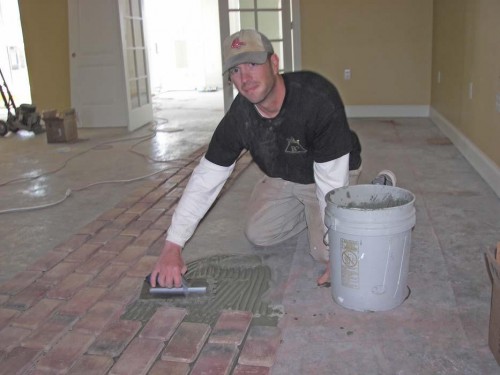 The brothers have operated a successful construction company, Thibodaux Painting Plus, in the Tri-parish area for the last 13 years.

“We just like doing it,” said Race, who is the elder of the two brothers. “Basically, we can take a house from the ground up and do whatever it takes to get it completed. We love to do remodeling and take a house that doesn’t look too great and turn it into something that people are amazed by.”

The brothers started operating Thibodaux Painting Plus full-time shortly after Race graduated in 2001 from Nicholls State University. Armed with a bachelor’s degree, Race opted to team with Ladd and go into business for themselves rather than start at the bottom of someone else’s company.

At the time, it was not about what they knew, but more about being their own boss.

Ironically, Race, 33, initially intended to go into his father’s business: teaching physical education. But when the opportunity arose to join his brother Ladd, 30, in the construction field, he opted to start a new family path.

“I enjoy doing this type of work, way more than I did trying to teach,” he said. “There is nothing like being your own boss and being able to handle things yourself.”

Thibodaux Painting Plus is a family-owned and operated business. Race and Ladd, along with 11 other workers, perform the labor, while Bass handles the management side. The brothers believe that having their father around helps to free up the necessary time to take on extra projects.

“Not many people get a chance to work with their family members,” Race said. “Having my brother and dad around makes it that much better.”

The Thibodaux boys’ knack for construction began in high school back in the early 1990s. They spent summer breaks helping paint the exteriors and interiors of homes.

Race and Ladd painted homes for nearly six years before tackling carpentry. The brothers had no formal training. Race said they picked up a few tricks of the trade from local contractors along the way.

Today, Thibodaux Painting Plus’ staff is skilled at performing a variety of tasks, like painting, pressure washing, carpentry and installing flooring, vinyl and sheetrock at newly constructed or renovated homes.

Race said the crew can paint any style of home, and can install any type of flooring – ceramic tile, laminate flooring and brick pave-less flooring, for example – anything except carpeting.

The carpentry work comes in when they are constructing or renovating homes. “We can do whatever’s needed at the time,” Race said. “All of our workers are flexible in that sense.”

Nearly three years ago, Thibodaux Painting Plus expanded into a new market when it began constructing homes from the ground up.

The brothers quickly discovered it is easier to build a new home than it is to renovate one. “Building a house from the ground up eliminates the hassle of having to repair something that someone did,” Race said. “With a new home, you know going in that you are doing it right from the outset.”

The company takes on an average of nearly 80 regular construction contracts a year and has built nearly 10 homes in the Tri-parishes since starting the home construction work.

“It just all seemed like a natural fit because we had all the tools to start,” Race said. “We would have been foolish not to. Not to mention, we’ve virtually cornered the market on other construction work for the newly constructed homes. You have a little more leverage when you are building the home yourself because the customer makes one call for all the work.”

It’s not about competing with larger construction companies in the area. The brothers’ strategy is to take pride in what they do and to build a solid reputation.

“That’s why we have been around all these years, because we won’t walk away from a job unless it is done right,” Race said. “And in some instances, that goes a long way with your customers as far as your reputation.”

“That’s what this business is built on. If you have a good reputation in the company, you are bound to do great business,” he added.

Packaging a competitive deal comes into play when the company submits pricing bids for work, which is handled mostly by Bass.

The Thibodauxs may not be in the classroom, but Bass and his sons Race and Ladd have made a name for themselves as a solid team. Thirteen years later, Thibodaux Painting Plus has left its mark on a number of homes and businesses in the Tri-parishes, and continues to expand the “Plus” services in the company’s name.