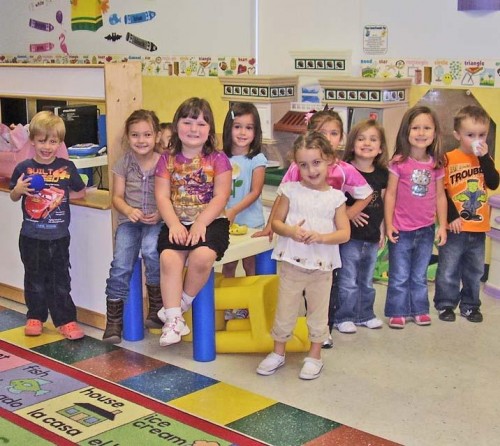 Years ago when a couple started a family, it was pretty much understood that mom would stay home to raise the kids.

Nowadays that may not be financially feasible or maybe mom doesn’t want to give up her career.

That’s what happened to Michelle Barrett. She had a new baby at home but also loved her job as a registered nurse.

When the demands of nursing became too great, Barrett had to make a choice.

“My husband asked me ‘What would you like to do?’ All I know how to do is take care of people and I always wanted to do pediatrics. So I told him I wanted to open a childcare center,” Barrett said.

She began by taking courses in childcare and became certified to teach health and safety for childcare centers. Barrett also toured other facilities keeping a mental checklist of the features she liked.

She then visited Child Care Resources in Thibodaux, the Department of Social Services, the Board of Health and the fire department to learn the rules and regulations.

With research and regulations in hand, Barrett sought out an architect who designed Little Imaginations Developmental and Learning Center.

The first thing a visitor notices about Little Imaginations is the security system that stops you in your tracks.

“No one can get through the door without going through the security fingerprint and code and there’s always someone in the office as well,” Barrett said.

The center has discreet cameras throughout the facility. They not only help the staff keep an eye on the everything going on, but also allow parents to check in on their children’s classroom via the internet.

Little Imaginations was originally licensed for 198 children but Barrett had the license changed to limit the center to 140. She currently has 115 children enrolled and doesn’t plan to take on many more.

“I would never have more than 120 children in my building. I plan to take in about four more babies in November,” Barrett said.

At least two employees provide care for 10 children in the infant room. Each child has a personalized schedule and diary which details feedings, diapering, naps, activities, and supplies needed.

Toddlers are introduced to their first classrooms where they begin to learn social skills through playtime, colors, counting and how to use their hands and develop gross motor skills.

They learn a baby sign language to let their teachers know when they’re hungry or thirsty. They also learn please and thank you.

“It’s for the children who can’t speak yet so we can communicate with them. This helps them not get frustrated,” Barrett explained.

The preschooler program is geared toward getting the children familiar with a traditional classroom environment. The children still have playtime, but they also learn basic math, matching, rhyming, colors, simple money and how to write their names.

“You teach them, but you teach them with games to make it fun. They learn how to take direction and transition from one subject to another so that when they go to school they’ll be prepared,” Barrett said.

“Everything is set up the same way so as they change and grow, the new classrooms aren’t a drastic change for them. We’re just adding more things,” Barrett said.

Structure is important at Little Imaginations, but not so much as to take the fun out of being a kid. If a class is reading a book or doing an activity a child doesn’t want to do, he can play off to the side.

“They may not be with the other children, but they’ll hear them and pick up what the lesson is. You’ll hear them singing on the side. You don’t want to be so structured that the children can’t learn at their own pace or they can’t enjoy themselves,” Barrett said.

The classrooms also have attached restrooms with kid-sized facilities and doors with security posts that keep them from slamming closed and catching little fingers.

“The security post doesn’t let the door close all the way – it will bounce back. They’re not supposed to slam the doors but kids will be kids and it happens,” Barrett said.

The kitchen provides two morning snacks of milk and cereal, grits or oatmeal, lunch and an afternoon snack.

The adjoining cafeteria with kid-sized tables and chairs teaches the pre-school children to eat meals in a setting they’ll face when they go to elementary school.

Little Imaginations has several outside playgrounds geared toward the size and age of the children. When the weather permits, the children go out in the morning and again in the afternoon.

The state mandates that daycare employees have 12 hours of continuing education and three hours of health and safety training. At least half of a centers’ staff has to be trained in first aid and CPR.

“My entire staff is required to be certified with infant and child CPR, continuing education and health and safety courses. The only staff members that can give medication are the ones trained in medication administration,” Barrett said.

“When a teacher rings a call bell because they have a child who needs some extra attention, then you have that extra person to go in and help. State regulation says I need two people in a room at all times – I have three,” she said.

Whether or not a parent likes it, sick children can’t come to daycare.

“If they’re contagious they have to go home and the state says the child can’t come in for 24 hours. The child has to have a release from the doctor to come back,” Barrett said.

Accidents happen. Running around on the playground can result in an injury requiring that parents be notified and an accident report be written up.

“No matter how little – sometimes it doesn’t leave a mark – if an accident happens we call the parents and write an incident report. The parent signs the report when they pick up the child,” Barrett said.

That might sound a little extreme until you note that the Louisiana Department of Social Services can drop in for a surprise inspection at any time.

The state Board of Health comes in every three months and the fire department checks the facility annually.

Another reason to give parents a call is if their little one decides to take a bite out of another child. Barrett said the reason a child bites could be that they’re hungry, tired, frustrated or that they just don’t want to share their toys.

“Sometimes something is just bothering the child. You ask and some of them will say, ‘I’m just having a bad day,’ or “My momma wouldn’t let me wear these shoes today,’ and it just sets them for the whole day,” Barrett said.

Different methods are used to stop biting and other inappropriate conduct. Separating the children, redirection and positive reinforcement are the first techniques used. Shadowing makes the teacher a child’s best friend in an effort to change the behavior.

A timeout in the front office has cooled off many a childhood temper. Moving a child into a classroom with older children is also effective.

“We’ll put them in with children a little older. You can take a 15-month-old and put them in a 19-month-old room. It’s only a four month difference but the 19-month-old children are quicker and bigger and the troublemaker will calm down,” Barrett explained.

Barrett’s goal is to provide the best facilities, education and primary care for the children left under her care before they go to school.

“You have to prepare the children for school and work to help the children. I haven’t met anyone I’ve worked with in daycare around here that that doesn’t feel the same way. It’s about providing what the children need,” Barrett said.

Barrett takes Little Imaginations and the care of her client’s children very seriously.

“My staff is really good but I’m ultimately responsible. Children are priceless and they’re the most valuable things a parent has in their life. You need to treat them that way,” Barrett said.

“You don’t make money in childcare. You have to do it because you like doing it and I love it.”

Lacy Borne’s class of 3- and 4-year-old children pose for a picture at Little Imaginations Developmental and Learning Center. The center opened in May 2001 and currently cares for 115 children. JENNIE CHILDS