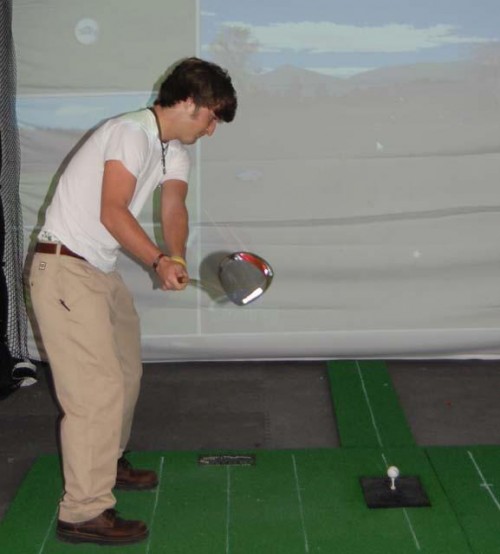 When John Russo isn’t making glass at Express Glass or working for Deroche Homes in construction, he’s likely out on the golf fairway swinging a nine iron or on the tennis court improving his game.

So it came as no surprise when people were complaining about the lack of tennis and golf shops in the area; after all, he had experienced the same problem firsthand.

As a fellow golfer and tennis player, Russo could relate to others’ frustrations. Avid enthusiasts were either forced to settle for the limited equipment selection, travel to specialty stores in New Orleans or go online to find a wide selection of clubs, rackets and gear.

After laying out the blueprint for Luv 2 Par, Russo called various dealers. Their feedback toward his idea for a business was positive.

“I said, ‘You know what, let’s try it out,'” he recalled. “I got to thinking about it and said we can’t just do tennis. I didn’t think just a tennis store by itself would support itself. So I said, ‘Let’s mix in a little golf.'”

For the last four months, Russo’s Corporate Drive location has provided the same equipment used by the pros: Clothing, rackets, clubs and balls.

“Rafael Nadal and Andy Roddick are Babalat guys. We have the rackets exactly like they use,” he said. “You won’t find stuff like this just anywhere; I used to have to order it online. We have the same Wilson racket Roger Federer uses, Dunlop (racket) like James Blake and any other racket out there. We have them.”

He even has “true” tennis shoes, which is a big difference from the generic term tennis shoes, Russo said. The brands Russo carries are specifically designed for tennis courts.

Having a store like Luv 2 Par has especially benefited enthusiasts like Vandebilt Catholic High School senior David Romano. Romano plays tennis for the Terriers and wants to take up golf. He’s been working at the shop for a couple months now, and is grateful to have a place to be able to get the equipment he needs.

“It’s great to have a place like this,” he said. “Not only is it a laid-back place to work, but it’s something we definitely needed in Houma. It’s the only place like it in the area, so it’s definitely beneficial to me or anyone else who plays the sports.”

Unlike retail stores, Russo said he wanted to bring more than just pre-strung rackets. Luv 2 Par sells rackets that they actually string themselves.

“We have to string them,” he said. “That’s what we bring that no other local retailers offer. If a customer walks in, he is going to get the attention. It’s one-on-one. Nothing wrong with big box people, but walk into those places and you’re by yourself.”

He also allows customers to use demos that they can actually try out for a few days, bring it back and try another if they want.

Russo has even developed a small golf green behind his shop so customers can try out their clubs.

“It’s not like other places where if you buy a racket or clubs, you’re pretty much stuck with it,” he said. “I want to help people find the gear they feel the most comfortable with.”

For golfers, Russo invested in a full-fledged, 18-hole golf simulator where they can test clubs, see their ball speed, club speed, angle of attack and the carry of the ball.

It also shows a computer-generated version of Tiger Woods breaking down a person’s swing and showing the golfer where he went wrong.

Russo plans on using the simulator as a teaching tool for beginners or as a chance for people to play 18 holes of golf without worrying about the heat or the rain.

“For those that don’t want to go out in the sun or on a rainy day, they can play a round of golf. I think a round of golf runs probably $20 or $25 per person,” Russo said. “As soon as we get things rolling we’ll do a lunch special, once we get the licenses to do that.”

He may even use it to improve is game, he joked, as the best he’s ever shot is an 86.

“I play more tennis now,” Russo said. “One thing is I know my product. I may not know how to play well with all of it, but I know the equipment. I enjoy it when people walk in and say ‘Thank God we have a place like this.’ That’s what I intended to do. I’m here to help fellow golfers and tennis players.”